The event venue was the the city and municipality in southern Spain called Marbella. The Danjumas are reputed to own several on point properties there. It is Senator Daisy Danjuma’s home away from home, her beloved city that she has always had a love affair with. Thus the city was bestowed the honour of hosting the families and friends of the the 2 families involved. The event was the 2nd & final leg of the wedding of the 1st son of the gorgeous and ageless Senator Daisy Danjuma, the wife of General TY Danjuma retd.

MORE PICTURES AND DETAILS BELOW. PLS CLICK ON READ MORE BELOW

So the classy and well packaged white wedding ceremony between the suave & very handsome Yuki Omenia & the ‘very pregnant’ and super gorgeous Moriam Omobolanle Rotimi held at the weekend in Marbella. Prior to this white wedding, the 2 families had had a superlative one of its kind traditional wedding in Lagos, a couple of weeks back that had the whole of Lagos talking in admiration for quite a while. It was indeed a super duper gathering then. Many have not yet forgotten the kinds of humongous gifts & wedding souvenirs they all took home. The way it is now with celebrity wedding is that, it’s now like, if you are not that ‘well heeled’, don’t even venture to hold a celebrity wedding party oooooo, because very much is going to be expected of you. The traditional wedding, was a classy and very well organised party.


So to properly manage the crowd expected at the white wedding, while still holding a first class nuptial ceremony, off to Marbella, in the province of Malaga, in the region of Costa del Sol they want. The choice of place and venue was Madam Danjuma’s like we have explained above.  First you would need to be a part of the families involved to be at the wedding, secondly, you must have been invited to be a part of the gathering. So no gate crashing whatsoever, except if you are in the super league.


The actual party began on Friday, meaning it was a 3-day event in that city- Pre-, Main & post event. What would one have expected from the super rich like the Danjumas. First was the welcome dinner on Friday, before the actual solemnization. People who had come from far & wide, especially many friends of the groom from France and had come to celebrate with the couple and their families were specially serenaded.


Then on Saturday, a brunch was organised  prior to the main deal which was to happen later on the evening of that same day. Wedding proper was a stupendously beautiful & romantic affair, right before the billowing waves of the beautiful sea, with gorgeous witnesses looking on in awe at the sheer splendour of everything. Marital vows were exchanged and the reception was at the same venue superlative venue. Knowing the family and worth of the families involved, you know the choice of venue would have been 5-star.


The next day after the deed had been done, which was Sunday was the day for another small party. After resting from the fun, enjoyment and stress of the day before, another party was packaged again. Which was another wondrously classy affair.


All in all, from the snippets gotten from those privileged to have attended the 3 day affair, another kudos to the stripes of the groom’s mother for a fantastically well put together nuptial ceremony.


Congratulations to the couple and we are expecting the cries of the little bambino very very soon Insha Allah.

Pictures of the wedding courtesy of The Light News. 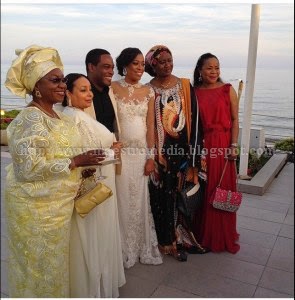 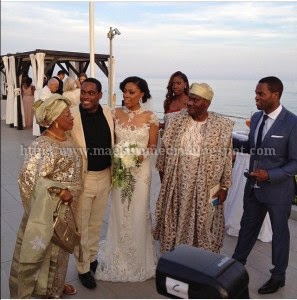 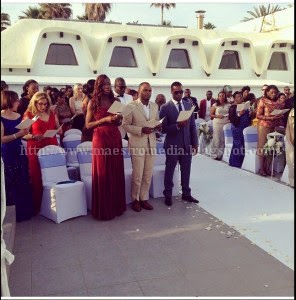