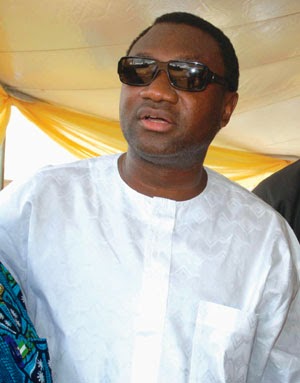 The whole world already knows that the former Executive Governor of Lagos State and the father of one of the richest Nigerian, died some few weeks ago. The old man is none other than Sir Micheal Agbolade Otedola, who died on Monday, May 5, 2014 at the ripe old age of 87 years (He was born July 16, 1926). The illustrious son is none other than the Forte Oil President in the person of Mr. Femi Otedola, Alhaji Aliko Dangote’s main man.


According to the gist we have gotten, a mother of all burial ceremony/party is already been planned that would shake Lagos to its very foundation. You all must first understand that as an illustrious son of the state and a Former Governor of the State of Excellence at that, the Government of the State would because of that be a major part of the all ceremony. That aside, one of the sons of the man, is himself extraordinarily well heeled, so he is more than capable of doing the whole show all by himself, it still doesn’t end there, by virtue of the fact also that he is in the league of extraordinary gentlemen, with the likes of Aliko Dangote, world richest black man, Tunde Ayeni, Segun Sebanjo, Tunde Folawiyo, Feyi Bali, Jide Coker, Foluso Adeagbo & many others, all these men too are willing to give great support to one of their own at his hour.


MORE AFTER THE BREAK. PLS CLICK ON READ MORE BELOW

So come Wednesday, Thursday & Friday, May 28, 29 & 30, 2014 all road would lead to the Otedola’s compound in Odoragushin, Epe LGA of Lagos State. It would be a convergence point of the who-is-who in the society. For those who enjoy ‘Owanbe of the first class order’ this most definitely the place to be at. Expect an avalanche of entertainers falling over themselves to make their presence felt. You would most definitely see King Sunny Ade on the bandstand and not forgetting Afro-Juju King, Sir Shina Peters and many more.


So have you gotten your Aso-ebi? If you have not! Do you know the colour of the day? If not! The dates are only just few days away ooooooooooo. Go get yourself sorted. One thing we know for sure is this, because of the caliber of men expected at the events, be rest assured that an unbelievable number of the most gorgeous ‘bleached and unbleached’ damsels would pack out the place.

See you all there!!! Papa Otedola is survived by Lady Doja & many kids, grandchildren and other family members. Femi Otedola is apparently the 3rd born or 4th. Ayokunle (Michael Jnr.) is the first, then the twins Tola & Lola, then Femi and Bolaji, Busola (Tony).