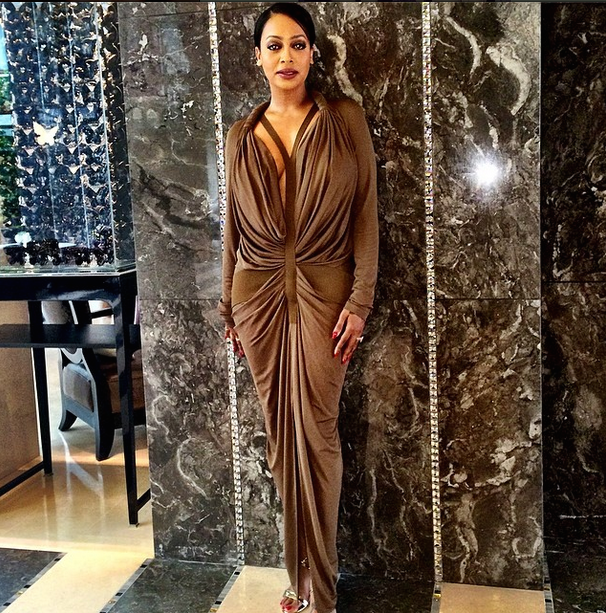 ﻿﻿﻿﻿One of the top celebrities that might have attended the nuptial ceremony between Kim Kardashian & Kanye West in Florence, the capital city of Tuscany in Italy is none other than Abisola Kolapo Daisi, celebrity first daughter of His Excellency, The Executive Governor of Oyo State, Senator Abiola Ajimobi.
Abisola who had lived in Los Angeles, California, USA sometime ago and counted as friends, some of the celebrities and stars, was seen in some snapshots, with a few of those who were sure to attend what many have come to tag as the ‘Celebrity Wedding of the Year’ the KIMYE Nuptial. At least judging by some of the snapshots we have come across showing the mother of 2, posing with and taking pictures with the likes of tennis star Serena Williams, who is a close friend of the Kim, another shot saw her with Lala Anthony who is another good friend of Kim and another shot saw her with some others that we couldn’t readily ascertain. The shots were taken in Paris, France at one of the several pre-wedding parties held for Kim before the main deal in Florence. Lala Anthony one of the stars at the party and one of those in the snapshots, had worn to the particular party, a $4550 dollar brown Givenchy Harness Draped Silk Jersey Dress.

So it is most probable, that Abisola was one of the few distinguished guests invited to attend the one in town ceremony. Any which way, she’s a celeb in her own right, who moves in the circle of American superstars. Remember that Kelly Rowland, the super star musician, who was a former member of Destiny’s Child was at her store in Lagos sometime back to engage in some retail therapy, while visiting an old friend after her Lagos concert, long before Kelly’s visit, another friend in the person of  Malika Haqq, a very close friend of Khloe Kardashian, had also visited her many months back, when she had just opened the said Lifestyle store.

OUT & ABOUT ON THE RED CARPET AT THE AFRICA FASHION WEEK NIGERIA 2014
5 STAR ELIAS BAR, LOUNGE & RESTAURANT OPENS WITH A BANG!!!
Comment