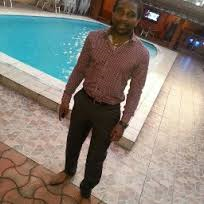 Ogbonna Kanu, is the younger sibling of the more popular and most probably the most awarded Nigerian footballer ever, in the person of former Arsenal, former Inter Milan, former Ajax, former West Brom, former Portsmouth football ace, the incredibly gifted former captain of the National Football Team Nwankwo Kanu.

If the gist coming to us is all that it is, we hear that Ogbonna has begun what might later or gradually become a very profitable business venture for him, as he has started his own joint for exotic dancers. For those who might not readily understand what we mean by exotic dancers, putting it lightly we mean strippers.

The location of this joint is none other than his elder brother’s exclusive hotel on the island known to all as Hardley Suites. According to the gist, the joint used is the beautiful bar & lounge on the upper suite and it is not an all comers affair. This past Friday, May 30, 2014 would make it the 2nd week that the joint started. Now that we have revealed this, it’s either they would shut down the joint or it would continue, but on a more clandestine tip. Last Friday, May 23, 2014 when the dancers first started, there were just 2 of them, the numbers might increase by popular demand or they just stay at 2.