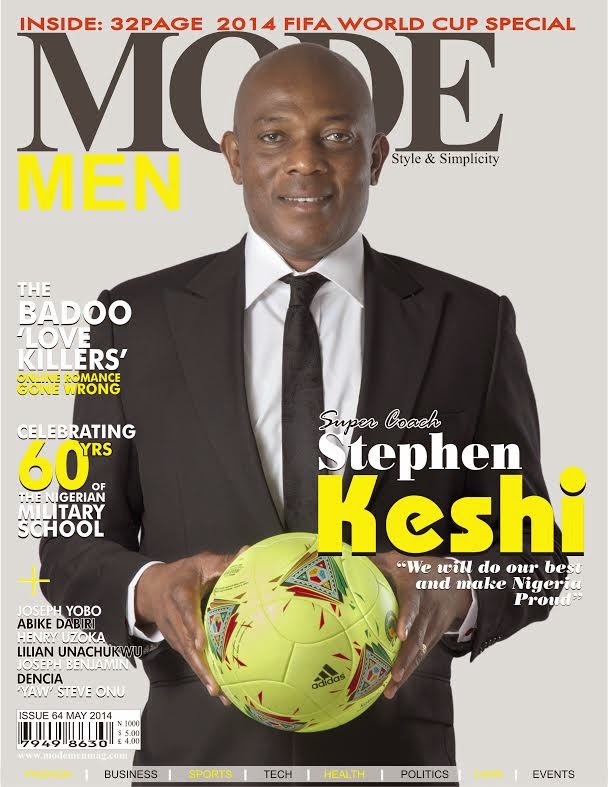 Africa Nations Cup winning coach of the Nigerian National Football team, Stephen Okechukwu Keshi is the cover subject of the new Mode Men Magazine that’s already on the news stand as we speak.

The former captain, who is leading us to the 2014 world cup in Brazil is most often referred to as the boss. This cover and interview with him, comes at the right time as the national team is in far away USA, preparing very well, before storming the football capital of the world in Brazil.

The May/June issue of MODE MEN, the premium men’s lifestyle magazine is now on the news-stands.  The Big Boss himself, Stephen Keshi – the Super Coach of Nigeria’s Super Eagles, is on the cover; discussing the team’s plans to make Nigeria proud at the upcoming World Cup.
There are 32, nay 33 (when you add the page, where Westerhof discloses his dreams for Nigeria) Special pages dedicated to the World Cup.
Other articles includes :The killers on Badoo, the 60th anniversary of the Nigerian Military School, Zaria and several other features that makes this edition simply irresistible. As may was Mother’s Day, Billionaire Dr. Taiwo Afolabi paid a tribute to his late mother while Julius Agwu also showered praises on his mother.
TagsCOAACH OF THE SUPER EAGLES ENTERTAINMENT AND LIFESTYLE MAESTROLIFESTYL MAESTROMEDIABLOG MAGAZINE COVER MODE MEN MAGAZINE NIGERIA NATIONAL TEAM STEPHEN OKECHUKWU KESHI STYLE AND GLAMOUR