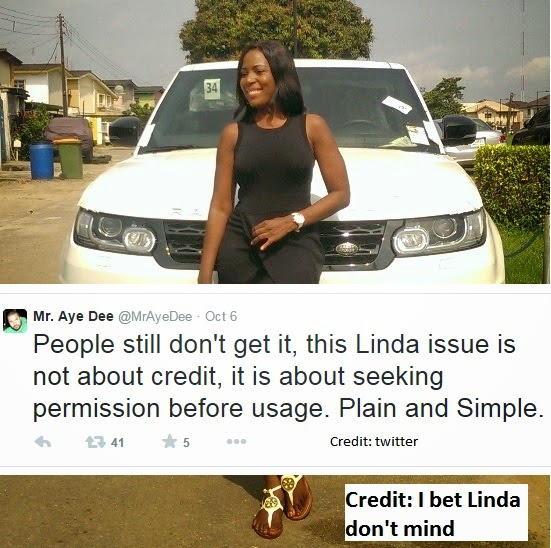 Linda Ikeji affects us all; just like
the Premier league (hope that’s how it’s spelt), enough Nigerians are engaged
in the LIB for those who may not, to know and appreciate that being the #2
indigenous website in Nigeria –second to Nairaland only – and the #1 news site
and #1 African indigenous personality blog in history, our friends are most
likely fans and addicts of hers and thus it serves as a primary means by which
they are informed and we are influenced if we happen not to be readers.

The summary of the challenge that
took her down (temporarily) is this tweet by a certain figure who suddenly
appeared from obscurity.
“People still don’t get it, this
Linda issue is not about credit, it is about seeking permission before usage.
Plain and simple.”
The above comment was tweeted by Mr.
Aye Dee on October 6th, two days after his twitter page came into
existence (October 4th).
For the media publishing that the
problem is Linda not giving him credit; you are wrong. Perhaps she has in the
past been attacked for not giving credit, but not so in this case, at least
according to the man at the helm of it. He wanted more from Linda. He wanted
her to ask him first before using anything on his TL (Time Line). He can sue me
now for posting this comment he made. Yes; that’s what he goes after.

It is a problem. Am I guilty of this
type of “plagiarism?” yes I am. I have posted comments and pictures from
people’s TL’s giving them credit but not asking them for permission first. Do I
intend to start seeking permission first? H’ no. Sue me. I can’t waste the time
emailing you and waiting for your response. By that time the news will be
expired. It is simply ridiculous except where the person has explicitly stated
that “no copying my stuff;” like Punch, shall I leave it be. Else I will copy
and post in good faith and with credit given.
It can be recalled that recently, in
December of 2013, PremiumTimes called out all major Nigerian dallies for
plagiarism. All the flagship dailies were accused of publishing an Obasanjo
letter that PremiumTimes claimed to have been the exclusive recipients of. [See:
Obasanjo’s
letter exposes Nigerian newspapers ethical flaws] These respected dailies
did not even attribute the letter to PremiumTimes; but yet PremiumTimes was
mature about it and only publicly embarrassed them for not crediting them with
the story.
In the attack against the LIB, I see
hate, envy, jealousy and desperation. I am not her greatest fan, but I call it
as I see it. Her accuser claims to run “15 Past 8” media. He was unknown till
this episode that has given him a taste of “fame.” His media is clearly the
owner of “9jalife.com” another unknown
website; as can be seen on both sites. On 9jalife.com there are tons of images;
the images you and I know. Those images we pull off of websites, that have been
pulled off of other websites so many times we don’t know who really owns them
and never bothered to find out.
I challenge Mr. Aye Dee, owner of
9jalife.com to prove to us and some of us who own the tons of images on 9jalife.com that he requested and received the
right to use the images.
You see, I would appreciate if a
person of character brings a hard working Nigerian down; who clearly earned her
respect and position; but when a desperado throws the tire to mob lynch a
commoner, I am irritated. Be a man, throw tires on Goodluck, on Diezani. The
crooks who have stolen our entire human rights and our billions (USD) for our
survival. Sue the Nigerian government who have stolen our pride and global
respect… who have stolen the lives of thousands of our loved ones and who have
gotten our daughters abducted for 160 days to be raped by their “siblings”
agents of their politician, clergy and military partners. But no; rather you
hound a hard working respected Nigerian who earned most of what she has and
claim to be Mr[LU1] . Righteous? These are the Nigerians who put the tires on Aluu4
because they made some errors, then walked to receive a bag of rice and voted-in
indicted criminal Fayose.
Mr. Aye Dee whose real name is
Mukhtar Dan’Iyan according to his PremiumTimes interview is also associated
with a certain Emmanuel
Efremov has been proven the registerer of the
domain name, “LindaIkeji.net.” I checked the who is to confirm this. This is
cybersquatting and a crime. See: http://en.wikipedia.org/wiki/Cybersquatting

After stuff got exposed, they quickly
redirected Lindaikeji.net to Linda’s blog to cover their utility of her name
over the years to make change.

In the PremiumTimes
exclusive interview he was accorded for Lord knows what reasons, he admitted
that the so-called Mr. Emmanuel
Efremov was a director of his 15 Past 8
“media.” So Mr. Aye Dee’s directors are potentially criminal cybersquatters who
live off of the good fortune of hard working people like the very Linda Ikeji;
making earnings from advert clicks they get from people who miss their road
while searching for the Linda they “hate’ so much’s blog.

I have a job for Mr. Aye Dee and Mr. Emmanuel Efremov. If you are not already working for the Presidency… I bet
Goodluck Jonathan would be happy to hire them. They totally fit the Reuben
Abati; Reno Omokri; Doyin Okupe profile of shameless, crooked and lying
do-anything-to-make-it hounds.
Plagiarism and copyright theft is
serious; but it is as serious to protect those accused as the accuser and
deserves credible claims and claimants.
Now report me.
Dr. Peregrino Brimah; http://ENDS.ng [Every
Nigerian Do Something] Email: drbrimah@ends.ng Twitter:
@EveryNigerian
Tags9jalife.com AYE DEE CYBERSQUATTING DR PEREGRINO BRIMAH GENERAL INTEREST NEWS LIB LINDA IKEJI MAESTROLIFESTYL MAESTROMEDIABLOG MUKHTAR DAN'IYAN PLAGIARISM