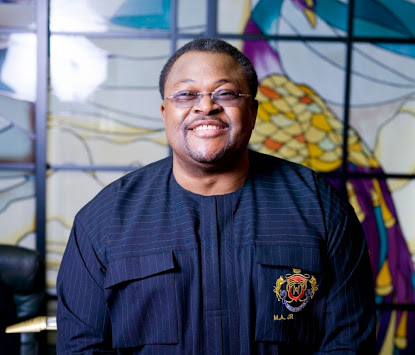 *Husband to be is Adeolu Abayomi Olufeko.

*Venue is the Banana Island home of the Adenuga’s.

Check out the invitation and Theme for the wedding below.

Find out about the colours of the day for the engagement ceremony. Which happened yesterday 06/07/2017.

All the details about the hush-hush wedding below.

So while we were composing the write-up on the upcoming Saturday, July 8, 2017 wedding date, the “engagement ceremony”, which normally precedes the wedding proper was ongoing as at that time at the bride’s dad, intimidating and palatial home inside Banana Island, Ikoyi, Lagos.

Like we had earlier said, someway somehow, it was like all and sundry were sworn to keep the whole thing very quiet. We can tell you categorically that many who normally should know didn’t know about this event and were actually also not invited.

Those who were lucky enough to attend this engagement were warned strictly and asked not to take pictures of any kind. Except maybe themselves. There was even a “Social Media Notice” card with the invitation which read thus-

We are honoured and grateful to share this day with you.

Please help us keep this event “private” by not sharing photos or videos of the couple on social media (BBM, What’s app, Instagram, Facebook, Snapchat etc).
You are more than welcome to take pictures of yourself.
***No Hashtags***
Thank you for understanding. 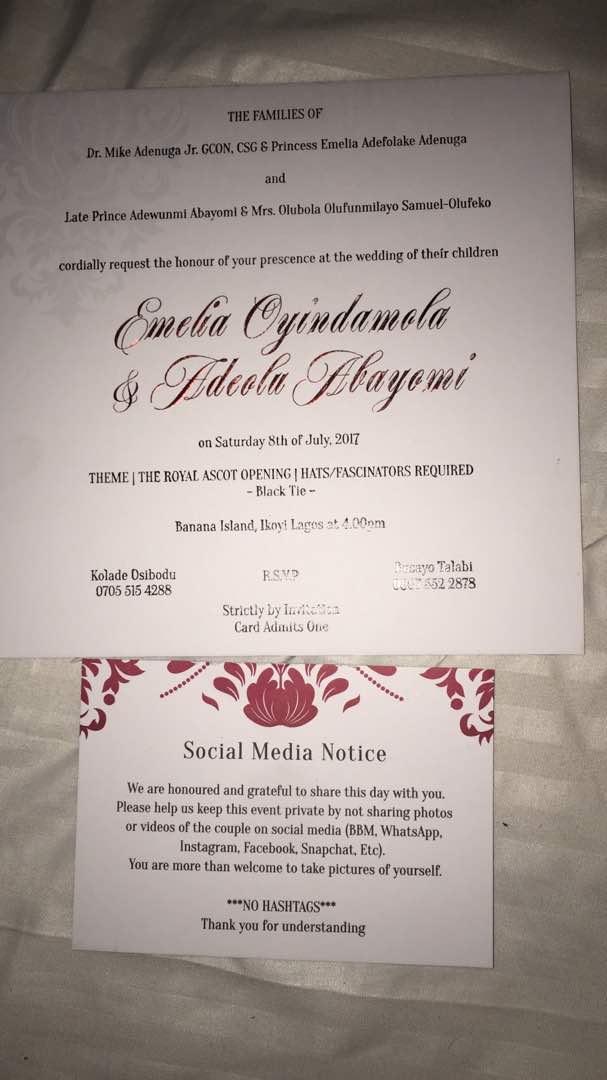 The following are the informations on the beautiful and very neat white invitation card with O & A written in bold black letters on the outside. It reads as follows-

Cordially request the honour of your presence at the wedding of their children.

Forget all that speculation about an engagement prior to what happened yesterday 06/07/2017. All of that old news was bunkum. The actual engagement party was what just took place. Except maybe this was a reprise of what had occurred before.

Maybe all that was spoken about before was an introduction ceremony.

The colours of the day, for the engagement was “cobalt blue and emerald green gele” (headtie) for women and same colour of cap for men, aso-ebi was said to have been for about ₦60000 only. We never said whether people paid for it or not, but that was the actual value.

For the Saturday show-piece event, which is the white wedding, it’s a strict, upscale black-tie event.

Just like security was top notched for the the engagement, the security for the Saturday she-bangs would be super-duper. The invitation card advises strict compliance and admittance for one per invite.

The groom on the other hand, by name Adeolu Abayomi Olufeko is not a pushover by any standards. Infact he is an acknowledged guru at what he does, an expert and authority in Graphics. He is a Nigerian-American, known as a digital strategist and artist, who is very well recognised in his field of expertise. And has done quite well for himself.

He attended Minnesota State University in Saint Paul, where he studied Computer Science with concentration in multimedia. He is celebrated in his industry like we had said earlier. He lived his formative years in Surulere Lagos, before relocating abroad in the mid 90s to Minneapolis, Minnesota in the US.

His body of works was celebrated globally in some computer courses in the early 2000s. He has been commissioned severally for design works by top celebrities abroad. He pioneered the first social media website for the renowned Lagos based secondary school, St. Gregory’s College, Obalende, which assisted alumni to connect globally.

So come this Saturday, July 8, 2017 Adeolu Abayomi Olufeko takes as his beloved wife Emelia Oyindamola Adenuga’s, in richer and poorer, in good health and bad, till………..