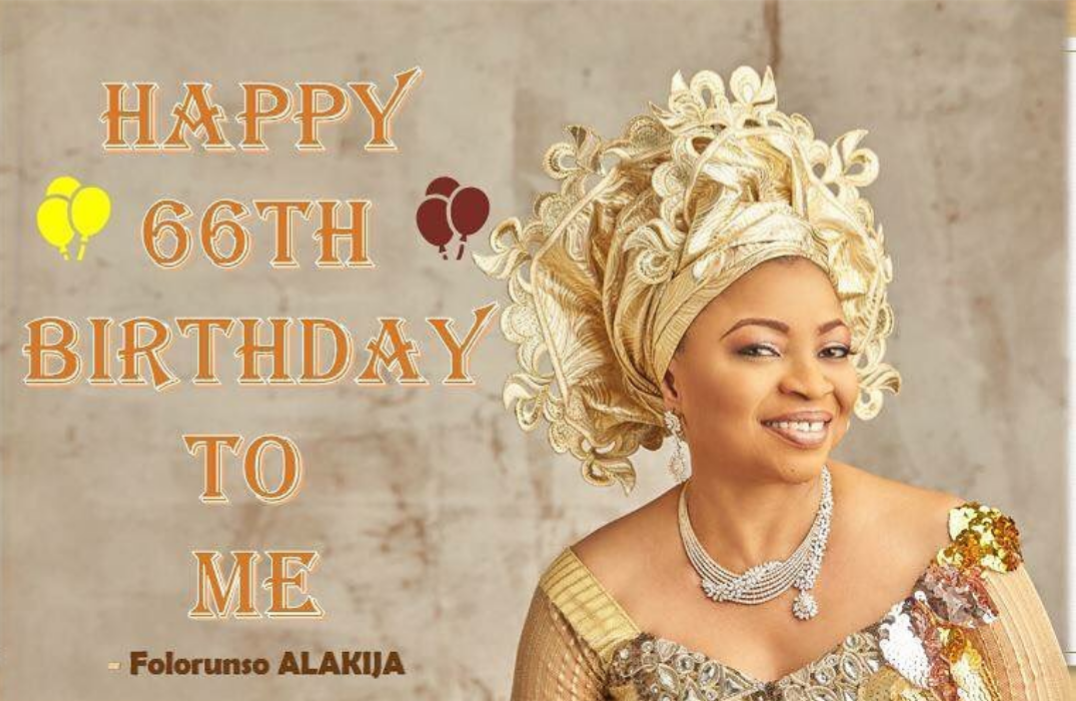 For many years running now, the Executive Vice Chairperson of her own oil and gas brand known to the world as Famfa Oil, Mrs. Folorunsho Alakija has been acclaimed as Africa’s number 1 wealthiest woman and it’s like she’s not ready in anyway or manner at relinquishing that post.

Though we don’t know her exact worth, but it’s been put in the region of $3 billion plus sweet Dollars. That an awesome amount of money or like some would say a very very tidy sum, running into a staggering or colossal sum if one were to change such amount into Naira. What that just says is that, it’s like some are nearly as rich if not richer than their country, Nigeria.

So the supremely fashion conscious lady clocked 66 years today, Saturday, July 15, 2017 having being born on July 15, 1951 in Ikorodu, Lagos to Chief L.A Ogbara.

In her own special way at saying thank you to God for another year alive, the former President of FADAN penned a birthday message to herself, ascribing everything to her maker thus-

“Happy 66th Birthday to Me!

Lord Jesus, I come to your throne room to celebrate my Special day. Thank you Lord for making me see another beautiful year. Thank you Father for the Gift of life.

All I can say is THANK YOU LORD for WITHOUT YOU I AM NOTHING BUT WITH YOU I HAVE EVERYTHING I WILL EVER NEED. I AM TRULY GRATEFUL.

Madam only just recently as in just last month, June 2017 held a supersonic wedding for her son, one of the 4 who had to remarry after the demise of his first wife due to illiness. That wedding of the sseason held at an iconic palace, where one of Great Britain’s most iconic figure, Sir Winston Churchill was born.

The  revebrations from that humongous wedding, which displayed sheer opulence in its most extravagant form has not yet subsided in the UK and would take a longwhile to subside.

So from us here we say, to the Lady of  a great and immense means. Happy birthday Madam. Long may you live to continually stamp your indelible feet upon the sands of time.

LAND OR LANDED PROPERTY A SURE INVESTMENT THAT NEVER FAILS
CHRISTABEL EKEH’S DIRTY & UNCOUTH ATTEMPT AT BREAKING THE INTERNET. AS SHE GOES BUTT NAKED!!!
Comment