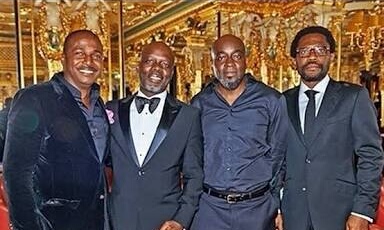 We are feeling somewhat nostalgic today. Years back “Atlantic Bar” better known as “A-Bar” for short was the quintessential go to place by the happening crowd.

It was the “watering hole” of the young, rich and upwardly mobile then, famous and the not too famous ones, both male and female at that use to gather at the spot daily.

If you wanted to know what was happening in town, you wanted to meet with those considered then as the “it-crowd”, the young movers and shakers of the society, those who you see featured on the pages of glossy magazines and tabloids etc this was the place. Many of the same people who are now top brasses in their various companies and establishments. It was that time before the internet became super popular and a major hit, the time before news would flash online, real time.

Some would slowly exhale now and exclaim that, that was the good ole days. It was before the days of them “Yahoo boys” packing out every joint and “blatantly showing off their loot” without a care in the world and without minding being tagged, looking rag-tag and somehow unkempt even with all the money at their disposal. The fun days of yore seem totally gone. A-Bar was some type of class separator then! Until her demise! Sadly.b

Yusuf Hamman, Marshall Onwuameze and Osa Ademota at that time seemingly got it right with that A-class joint, twas like all the elements came together properly and it really worked for them. Apart from having the right crowd always in place then, what was also majorly great about the hotspot that opened in the year 1996 and was shut down in 2012 (16 good years of fun galore) was their food and the ambience. The food then was the bomb! Especially their take on the “concoction rice” a common delight. which tasted super scrumptious and was out of the world.

Where are these trio now who all should be in their early 50s at most now?