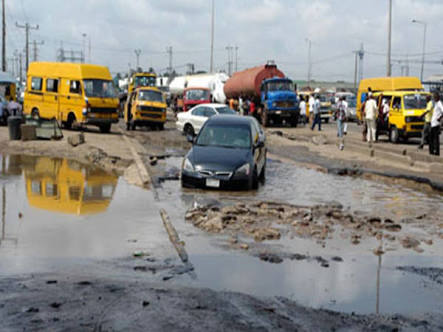 Imagine that a major road that connects a major part of Lagos is that terrible? Imagine potholes on a so called expressway that’s like gullies? And because the very long stretch of road is called an expressway, you know that it has a minimum speed limit that should normally be allowed!

So you speed too much then it’s at your own unfortunate peril! That’s because you could just arrive at one of those gully like major potholes all of a sudden, and to try to manoeuvre out of harm’s way at such speed might just be too late, it’s either you enter which is terrible on its own especially at a speed or you try to to do a split second shift away and it’s a collision with whoever is on the side, any which way it’s not a good outcome! So why is the stretch called expressway? Majorly because expressways  have multiple lanes to and fro that carries heavy loads of traffic, (that is mass of cars, trucks etc) and because of how bad the situation is, it makes one to ask again “expressway to where please”? The only answer that readily comes to mind would be “, Expressway to quick and untimely death!

Bad as this stretch of road is, it is a major road that carries unprecedented mass of traffic, major users of the road being some of the most despicable transport drivers that the earth as ever seen. These drivers are now supported by their conductors and both are now antagonised by a group of the most despicable lot known in local parlance as “Agberos”, which is another word for the most “irresponsible touts” you can imagine. These combination of people now at some spots collude together to further unleash chaos on the road, stopping indiscriminately thereby adding more negative drama to an already terrible situation!

Apart from that particular stretch from the airport that is not too great but still manageable and that has light, that now joins the major stretch, which is the Apapa-Oshodi Expressway has no street lights so it is very dark at nights. So imagine being on that road at night, no street lights, massive potholes at portions of the road, and many long trucks that we most often refer to as trailers everywhere and then you are speeding and suddenly there’s an unavoidable too big to be true bad pothole!!! Just try to imagine it all.

Why this outburst? You may be asking!
It is because for every soul that is lost through avoidable circumstances like it is described above, which could have been easily remedied by those who should care, there are those who would be held responsible and liable, either in Government or out of Government!

What are we asking for truly? From my little Understanding, it’s just the bearest minimum of standards. Is (are) it (they) possible, ooo yes and very much so at that. But what we majorly have are “nicompoops” in the position of power and influence, those that we voted in and when they get there, become too big for themselves and who would now begin to talk down on those who voted them in, who now doing what is expected of them, would now make you feel like you are a nuisance. To the extent that they even try to shove the little they would do down your throat

So Governor Akinwunmi Ambode and former Governor Babatunde Raji Fashola, the Honourable Minister for Works, let’s forget the other intimidating portfolios for now, over to you both. The tag honourable is supposed  a to mean a whole lot, let’s feel the weight as it concerns you. Are going to continue to play politics or are we going to come together, forgetting past rivalries to save lifes and help avoid terrible injuries?