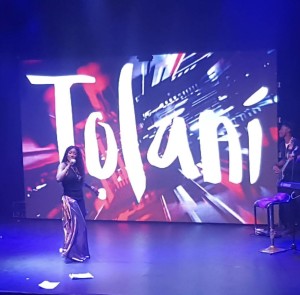 Maybe that artistic/creative gene(s) specifically in the art form, which the dad never displayed before, is what the kids are now showing off with glee! Sometimes the old ones can live a particular beautiful dream of theirs via their kids, this most likely might be the case in the lives of the children of Femi Otedola.

Many might not have known her that much or heard her name as much as that of the other more popular two, in the persons of DJ Cuppy-Ifeoluwa Florence Otedola, the Celebrity Deejay and Temi Otedola, the top lifestyle blogger, but Tolani Otedola is the first born daughter and the eldest child of the certified Forbes billionaire, Femi Otedola.

Like the other 2, she’s also very gorgeous too, a pretty girl by all standards and the eldest of the 3 gals, even older than the only son too.

From the way the 3 daughters of FO, (which is one of the popular sobriquet by which Femi Otedola is addressed by most), have embraced their very creative and artistic sides, it is obvious that their parents have a very liberal leaning, unlike many of the kids of the super well to do, whose parents most often would have insisted that their kids should go find other meaningful things to do. So most likely FO might have had an agreement with his kids, that they finish school first, get your degrees and then thereafter go do whatever catches your fancy and I ll support you to the best of my abilities.

So Tolani, like her younger sibling DJ Cuppy has thought to explore her musical side, expressing her artistic gifts and showcase her talent to the world via singing and performing (music).

So as a star in the making, an emerging entertainment Sun, set to let her shine fall on all, she showcased her skills for the first time publicly yesterday, Friday, October 27, 2017 at that artistes enclave on Tiamiyu Savage, Victoria Island known to all as Terra Kulture.  Incidentally, that same street used to house FO’s former business HQ- Zenon Oil head office.

This emergence of a well supported budding new music talent, set like “Pinky & the Brain” to take over the world music stage, sure started on a good footing. Knowing her dad very well, if Tolani is as talented as she has displayed already, then we are sure that he would leave no stone unturned to make sure to help her realise her dream of becoming the “next international world music star” to emerge from Nigeria Africa.

Should we be expecting a “Grammy” award sometime in the future, from the Otedola’s household? Never say never, is all we can readily respond with right now. But we can also say that for a first outing, she did give a good account of herself.