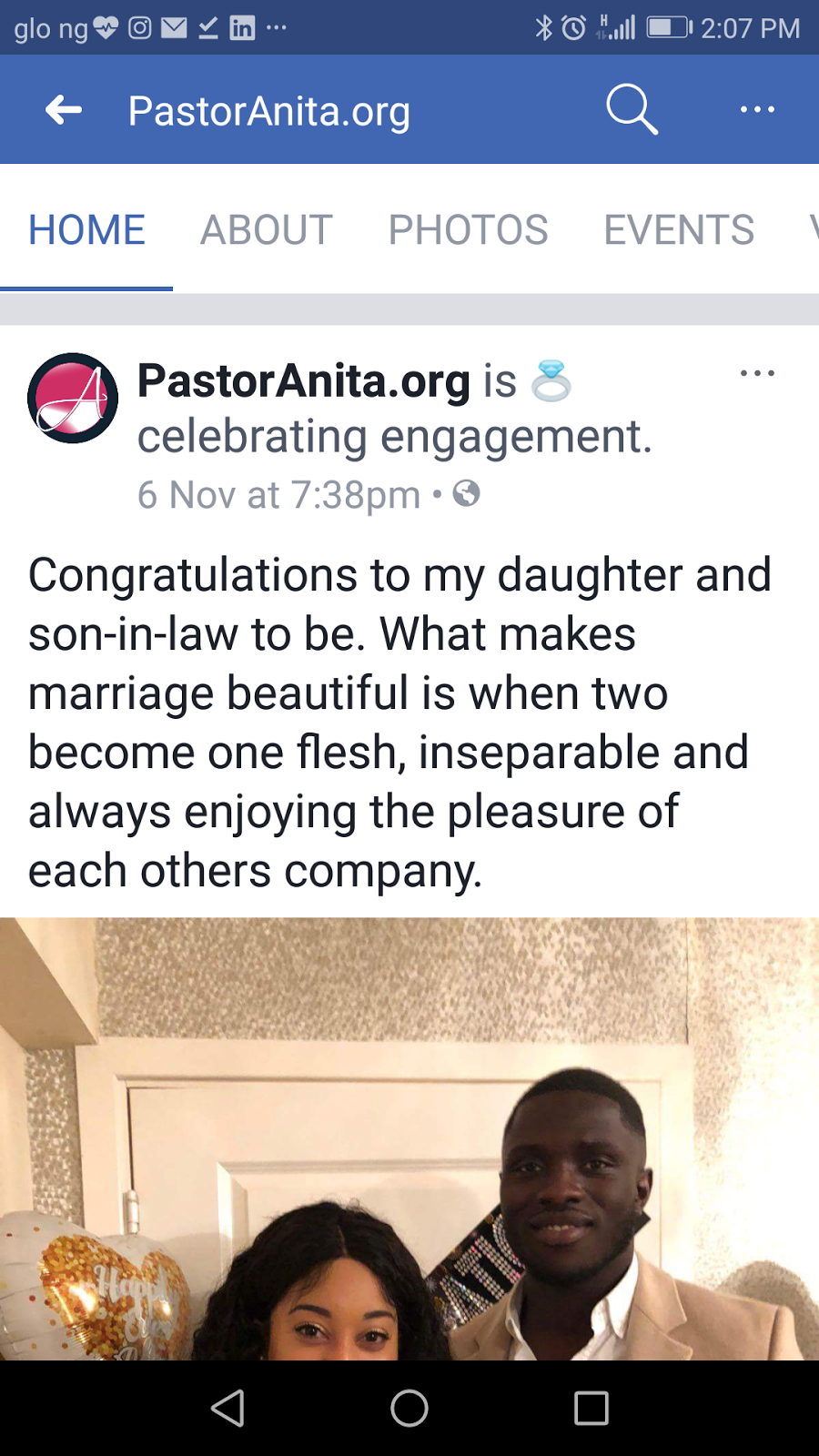 If the online platform @PastorAnita.org said to be the personal blog of Pastor Anita Ebhodaghe is to be believed, then one of the two gorgeous daughters of the founder of “Believer’s LoveWorld Incorporated aka Christ Embassy, “Rev. Dr. Chris Oyakhilome aka Pastor Chris” is getting set for her journey into holy matrimony with her handsome beau, whose name we don’t know yet. Sharon Oyakhilome is the elder daughter, while Charlyn is the younger.

“Congratulations to my daughter and son-in-law to be. What makes marriage beautiful is when two become one flesh, inseparable and always enjoying the pleasure of each others company”.

Since the announcement was made, there has been an avalanche or outpouring of congratulatory messages pouring and wishing the supposed new couple well and by extension her mom too. Though many of the comments have been congratulatory, a particular one had sought to debunk the announcement, as a “tale by the moonlight”, claiming that the platform doesn’t belong to the “real Pastor Anita”, who has since reverted back to her maiden name- Ebhodaghe after her divorce was finalised last year and the union annulled. The commenter also went on to claim that Sharon Oyakhilome is not engaged to anyone.

“Reverend Dr. Chris Oyakhilome” is probably one of the most popular men of God in the world from Nigeria and is the founder and lead Pastor of one of the biggest churches on the planet- popularly called “Christ Embassy. He and his then wife, Pastor Anita with whom he had the 2 lovely daughters parted ways a few years back after 25 years of marriage, on 2014 to be more precise, blaming irreconcilable differences and suggestions of infidelity and cruelty.

The 2 gorgeous young ladies from that union have since grown into awesome beauties, who lives with their very quiet half Swiss mom in London.

That Sharon Oyakhilome is getting set to marry is surely a big thing at least for the Christ Embassy side, who would want to make sure the wedding of the daughter of their founder, who is even ascribed as one of the richest Pastors in the world is a statement occasion. But if what we know about the ex-wife is anything to go by, it might just be a quiet, not loud at all event.

SENAMI SOSU-IBORI WHEN LOYALTY IS MORE THAN GOLDEN!
WHEN BILLIONAIRE MUSA DANJUMA ADDED A YEAR! AND CELEBRATED WITH A MOTHER OF ALL CLASSY PARTY ORGANISED BY HIS HEARTTHROB DANIELLE ALLEN
Comment