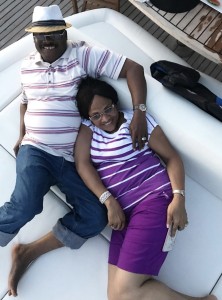 We don’t know why relaxing, when it is highly needed needs to cause any form of hoopla whatsoever. Even doctors world over recommends it. And it seems like that was the case with the discovery of the above picture.

The Yoruba’s having a time honoured saying that goes thus “The very relentlessly hardworking one, also deserves the time and luxury to relax too”, it’s an assertion that we readily agree with strongly, especially as another saying says “All work and no play, makes Jack a full boy”!

So after all the stress of governance in his state, coupled with the myriads of other things that he has to grapple with everyday, everytime, the lovable executive Governor of the state of Oyo, in fact the record breaking 2nd termer in the person of his Excellency, Senator Abiola Ajimobi and his wife, Florence who is still a delectable beauty  any day took time very recently, to have their own “me”/us” time away from the whole weight of stress. At least so that the Governor can see clearly too. No one wants any dullness of any kind!

From the look of things, it is obvious that both very loving couple didn’t allow any thing of any kind to disturb both from luxuriating on the luxury yatch or boat they were on, breathing clean air endlessly and having a fun and very relaxing time. It’s very obvious from the picture that this 2 are so very into each other and enjoys each others good company.

Now we know the secret behind many of the great decisions of his excellency.