So yesterday, Thursday, December 20, 2017 was the D-day and the convergence point was the expansive hall of the Eko Hotel and suites, Ademola Adetokunbo Street, Victoria Island Lagos. The event was the 60th anniversary edition of the longest running beauty pageant in Nigeria, known to the world as Miss Nigeria.

This was the 2017 edition, organised as expected by Daily Times Newspapers owned by Fidelis Anosike’s Folio Communications. The historic event was sponsored by the likes of GAC Motors, Wazobia FM who aired the proceedings live, Heritage Bank who were prominently involved, Lasena Waters, Yudala, NAPTIP, Cinitron, Studio 24, FIRS & others.

The red carpet was billed to have started at 5pm and the show itself at 8pm. As expected the timing was totally off, as none gave those times any importance whatsoever. Just imagine that as at 9:30pm many were just still trickling in, Fidelis Anosike chairman of Folio Communications was so incensed by this, that he openly spoke about it later when he had the opportunity.

The judges to pick the new queen were many, it had the likes of Chioma Ude, Ex-queens Helen Prest-Ajayi 1979, Binta Sukai 1990,  delectable Omotola Jalade-Ekeinde, architect extraordinaire Jumoke Adenowo, designer of note Odion Oseni, DG of NAPTIP-Julie Okah-Donli, Future Awards & Red Media’s own Debola Williams, Noble Igwe of Style Vitae & 360 Nobs, The Wedding Party 2’s Enyinna Nwigwe and a few others on the seats to do the job.

Guests were aplenty, Heritage Bank one of the major sponsors was very well represented by many of their directors likes of Jude Monye, the acting MD, Adaeze Udensi an ED & even their Chairman.

Former Governors Aremo Olusegun Osoba of Ogun State and James Onanefe Ibori of Delta State attended, devoid of every paraphernalia of office that they used to enjoy. James Onanefe Ibori attended with his gorgeous wife and they both actually came on time at 8pm, they actually came from Orji Uzor Kali’s Daughter’s white wedding. So accessible was Ibori, that we actually walked up to him and shook his hands when he was going out to bring a guest in all alone. Others that we saw were the likes of NFF Chairman Amaju Pinnick, billionaire businessman Musa Danjuma, Erelu Kuti, Erelu Abiola Dosunmu who was also a judge

Also seen were the likes of Terry Wayas, Linda Ikeji, Freda Francis, a very pregnant and sumptuously shaped Akunna Nwala of Kuku’s hair, former MD of the now defunct Bond Bank, John Darlington, the in your face Hilda Dokubo who was in all black and showed off her assets with aplomb, Prisca Ndu, Destiny Amaka who has lost a massive amount of weight one is first shocked on seeing her, Chike Chikeluba, Linus Idahosa, former best model of the world, Bunmi Ademokoya, Joan Okorodudu and many others.

The entertainment was provided by Mayorkun who performed admirably well, performing 3 of his hits to the delight of all.  Nigeria’s king of pop 2baba totally raised the roof with his performance, dude really knows how to get to the people/crowd/fans. The crown prince, of off the cuff mad hilarious jokes Bovi was in his element (as he effortlessly cracked people’s bones that they laughed and laughed), he also was one of the days hosts too, the other being the handsome Ebuka Obi Uchendu who was partnered again with Lala Akindoju! This pair are really in demand this season and must be raking in loads of dough for it. Bovi was mostly partnered with Olive, who changed a couple of times during the course of the event, into some beautifully sexy outfits that must have gotten some eyes popping!

The main event itself kicked off with the 37 contestants representing the 36 states and the FCT getting introduced to all in their traditional attires. It was a massively long process, that took too long. Then there was an interlude and they then came out again in their evening wears, which was another very boring long process, before they were then trimmed to top 10 made up of Miss Edo, Ekiti, Akwa Ibom, Bayelsa, Ondo, Ogun, Bauchi, Adamawa, Ebonyi and Delta State.

Thereafter these 10 were picked from the 37, it was questioning time and many flunked this part, some were just rambling incoherently and just saying things that were near dim. Either the questions were just too high for them or they were just not up to it. But people just laughed hilariously at all of this, seeing it as comic relief.

People were expecting a further trimming from 10 to 5, only for that to be bypassed and the runners-ups and winner to be announced in a rather very anti-climatic manner. 2nd Runner up was Benjamin Anne Ufuomanefe-Miss Ondo, 1st runner up was Rita Chinedu-Miss Delta and the winner was Ehiguese Mildred Peace, who was Miss Adamawa now Miss Nigeria 2017!!!!

Though the whole event by all standards and in all ramifications was top notch and upscale, people wondered openly and asked as per whether these crop of girls were the best we could have gotten to do a beauty pageant of the caliber of Miss Nigeria, especially like many said with so many pretty girls, gorgeous girls that abound in Nigeria, why we couldn’t present or get an outstanding 37 that were stunners and had the brains too was shocking?

Former Miss Nigeria 2013, Ezinne Akudo was announced as the new Creative Director of the Miss Nigeria Organisation for the next 5 years. She would be handling all the affairs of the brand for the half a decade and would most probably take the pageant to the next level.

Another highlight of the event was the announcement of a donation of ₦4.1 million which was shared between all the 41 contestants that participated, meaning each participant went home with at least ₦100000 each, which the organisers saw as a form of empowerment. There was first 41 before it was trimmed to 37 and then 10 and then the 3 winners were announced.

Miss Ekiti, Bolarinde Damilola Rebecca was picked as a winner of a modelling contract with Isis Model Management Africa, she was declared as “Top Model Miss Nigeria” and she went home with a bag of goodies from the agency, a 2 year contract and a Camera from Canon, while Miss Cross Rivers, Ana Victoria Lawrence won a competition and was declared as Miss Emerald. 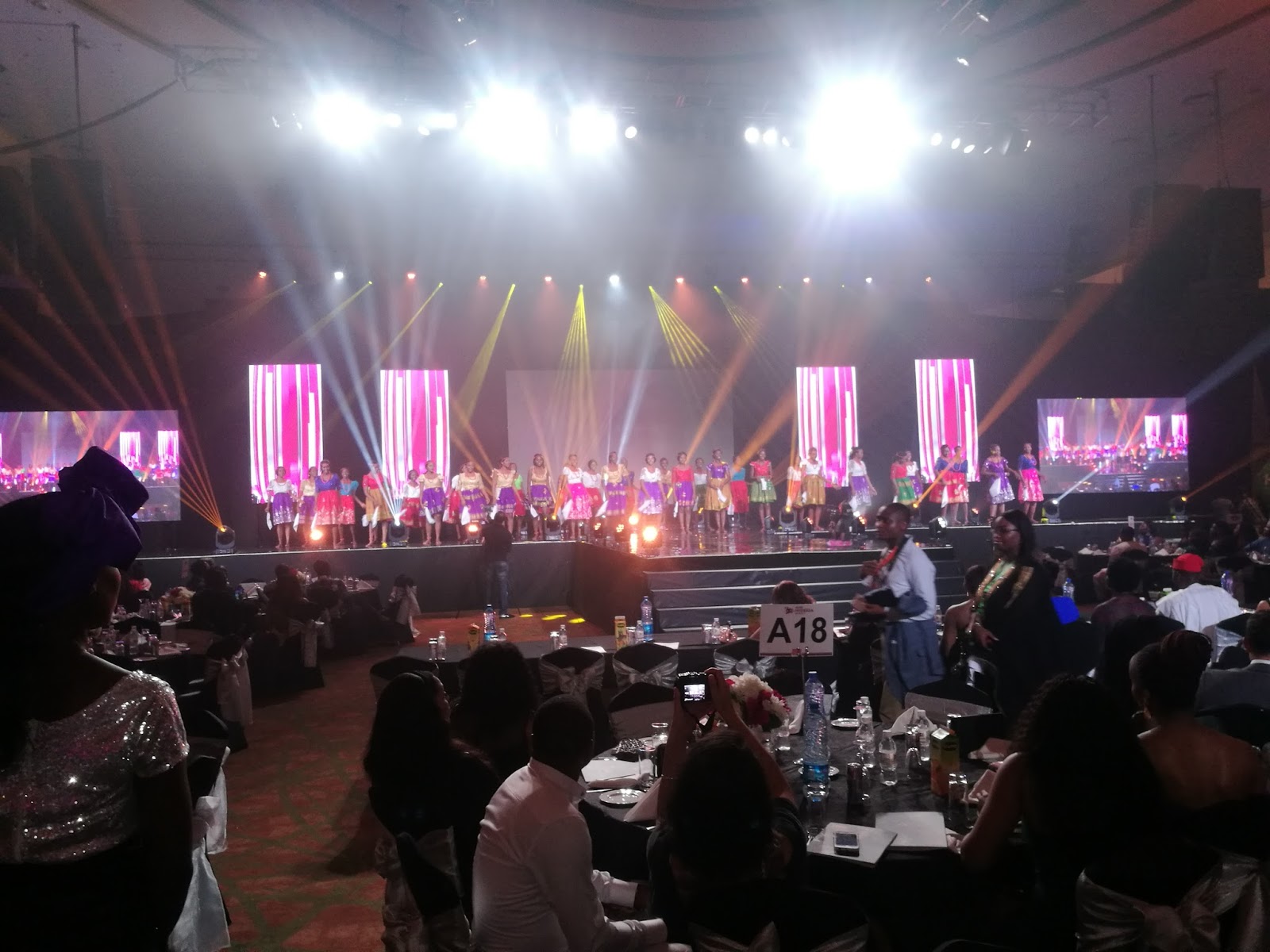 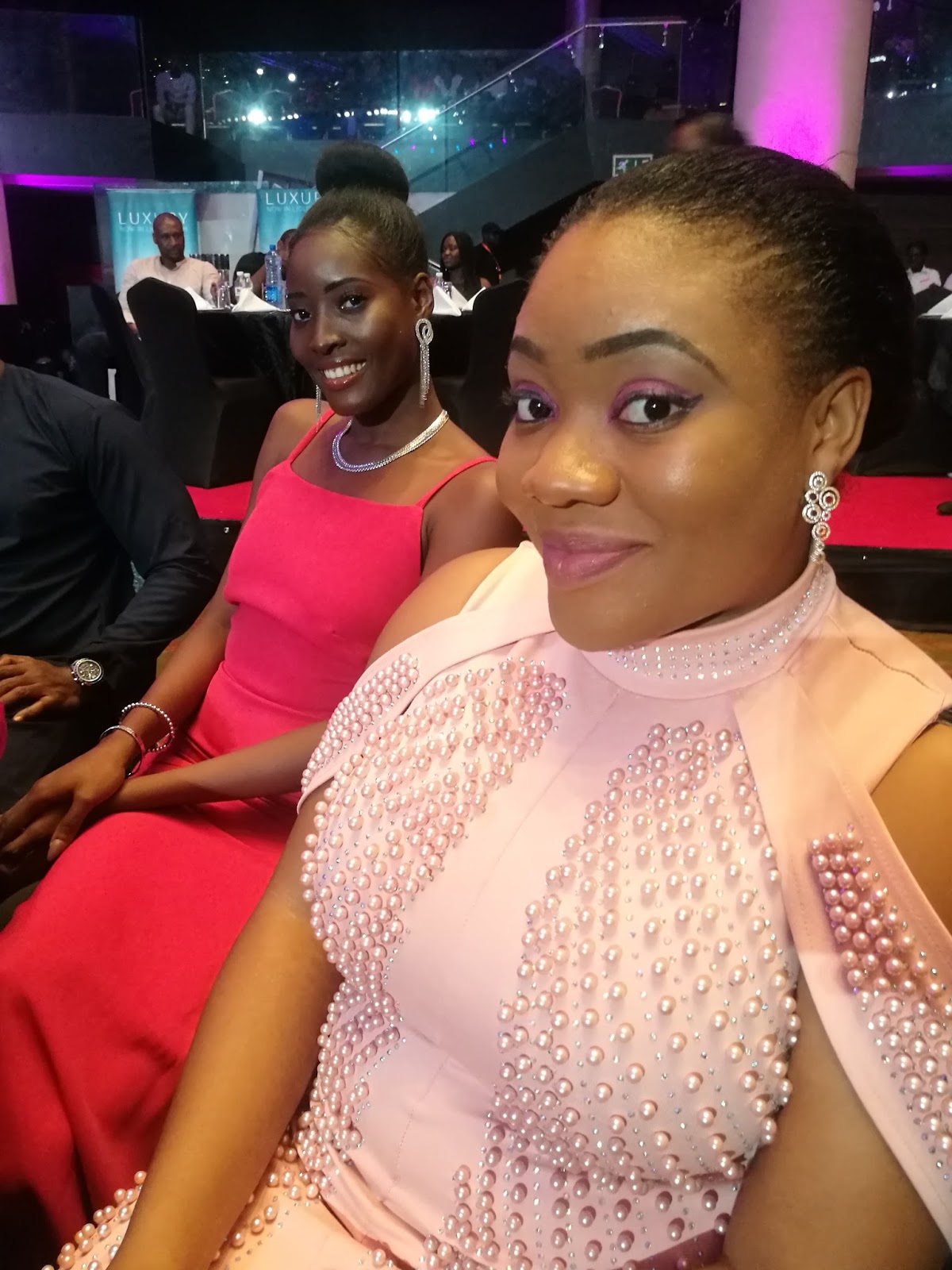 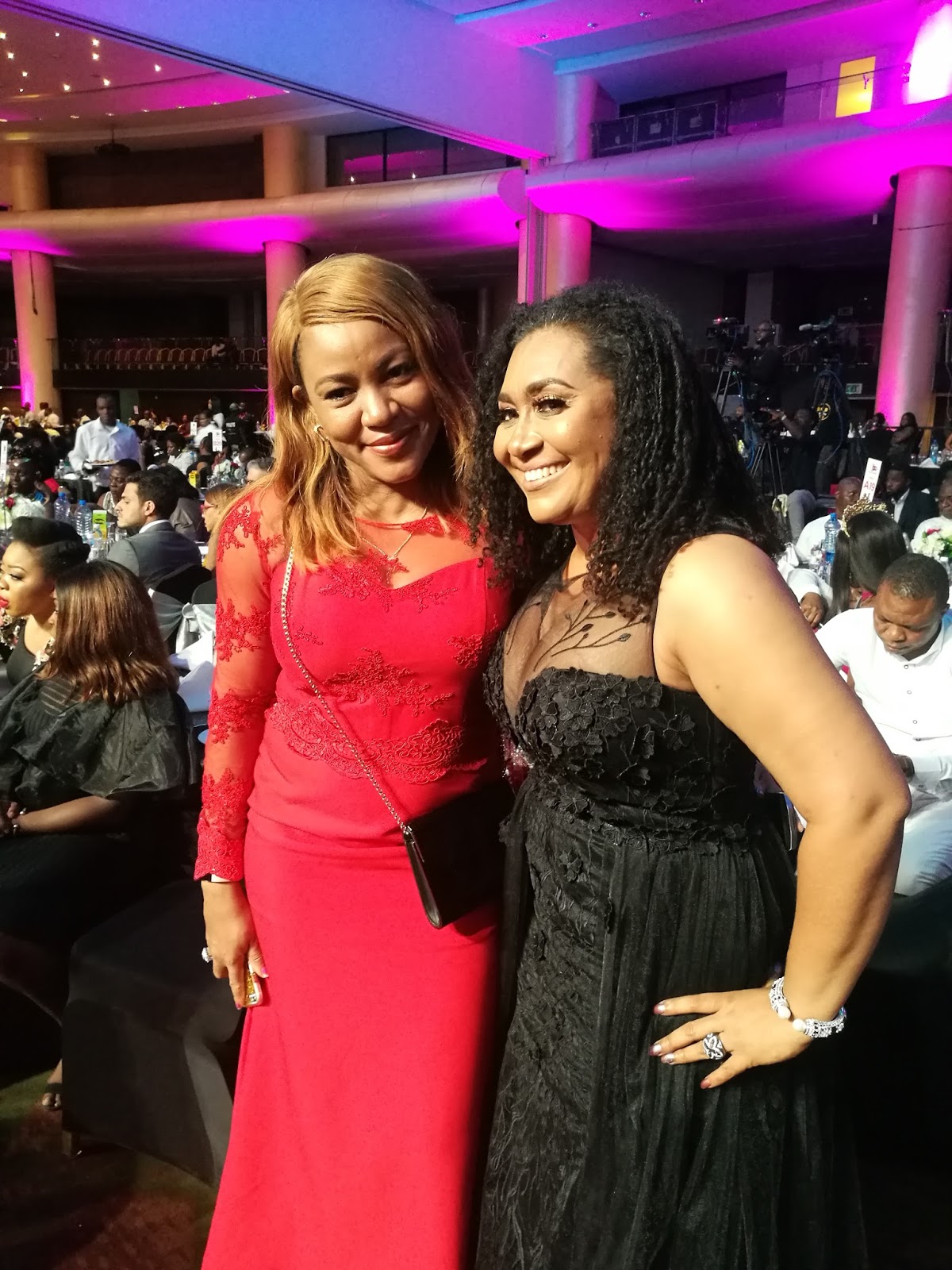 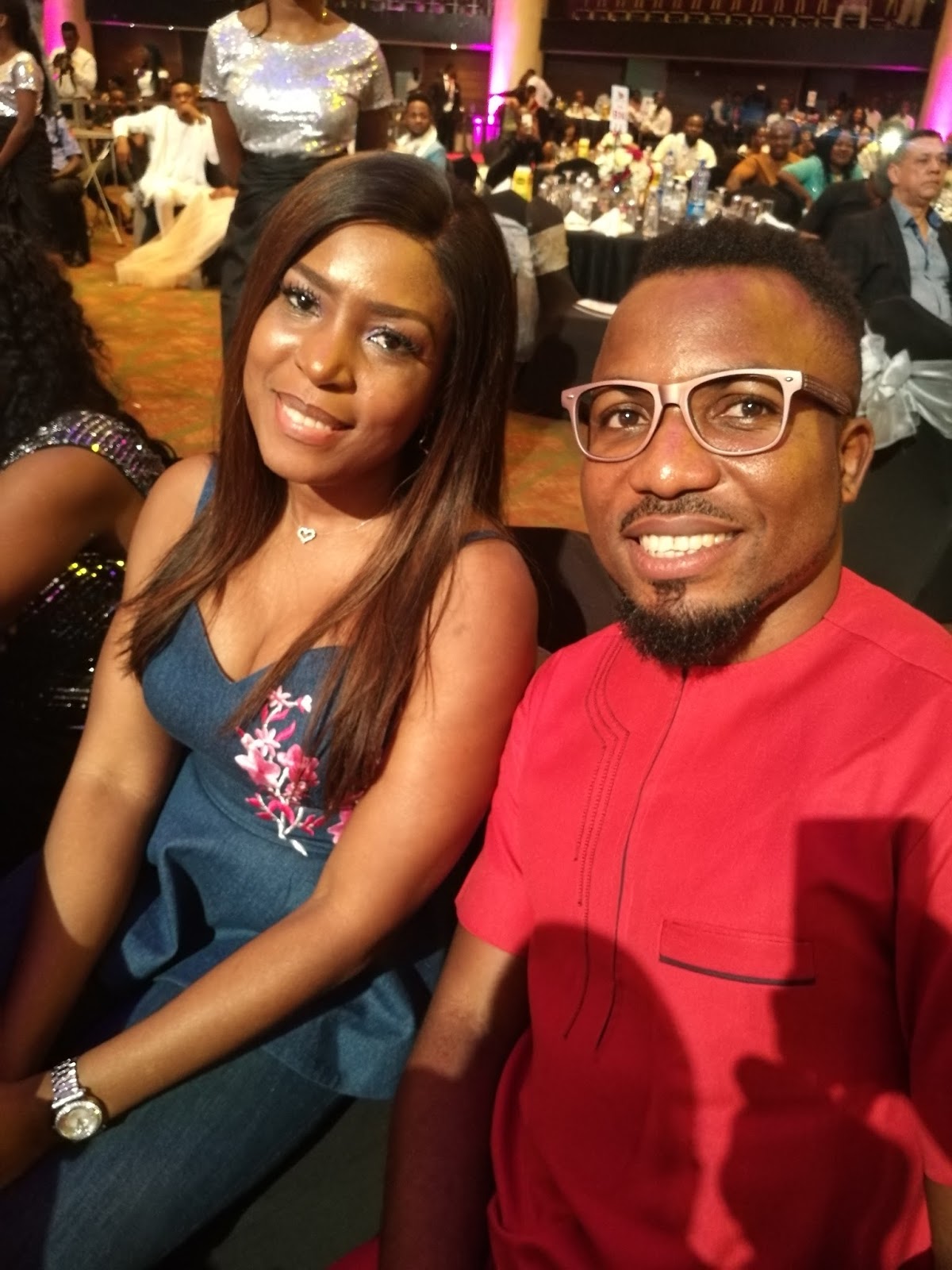 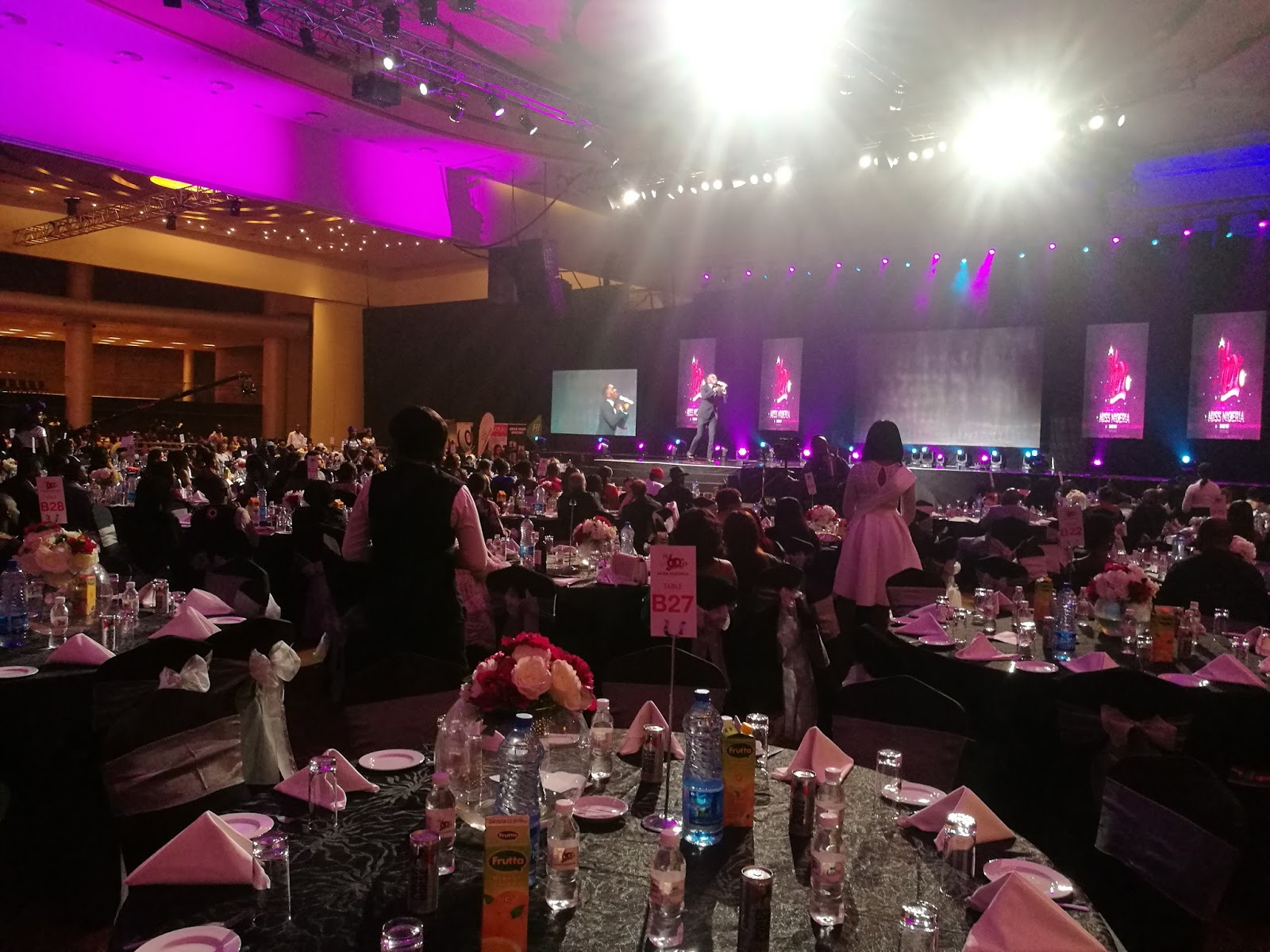 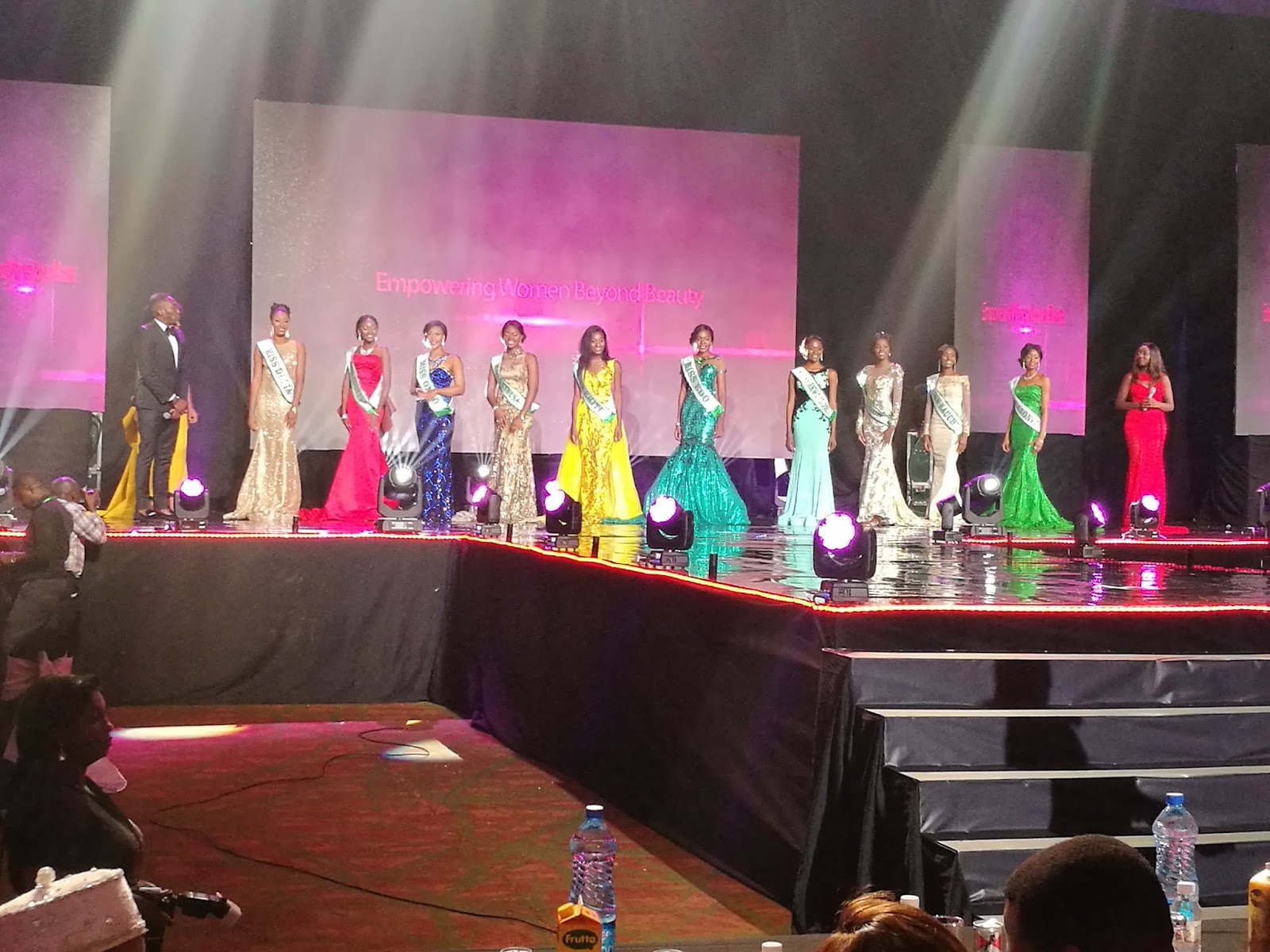 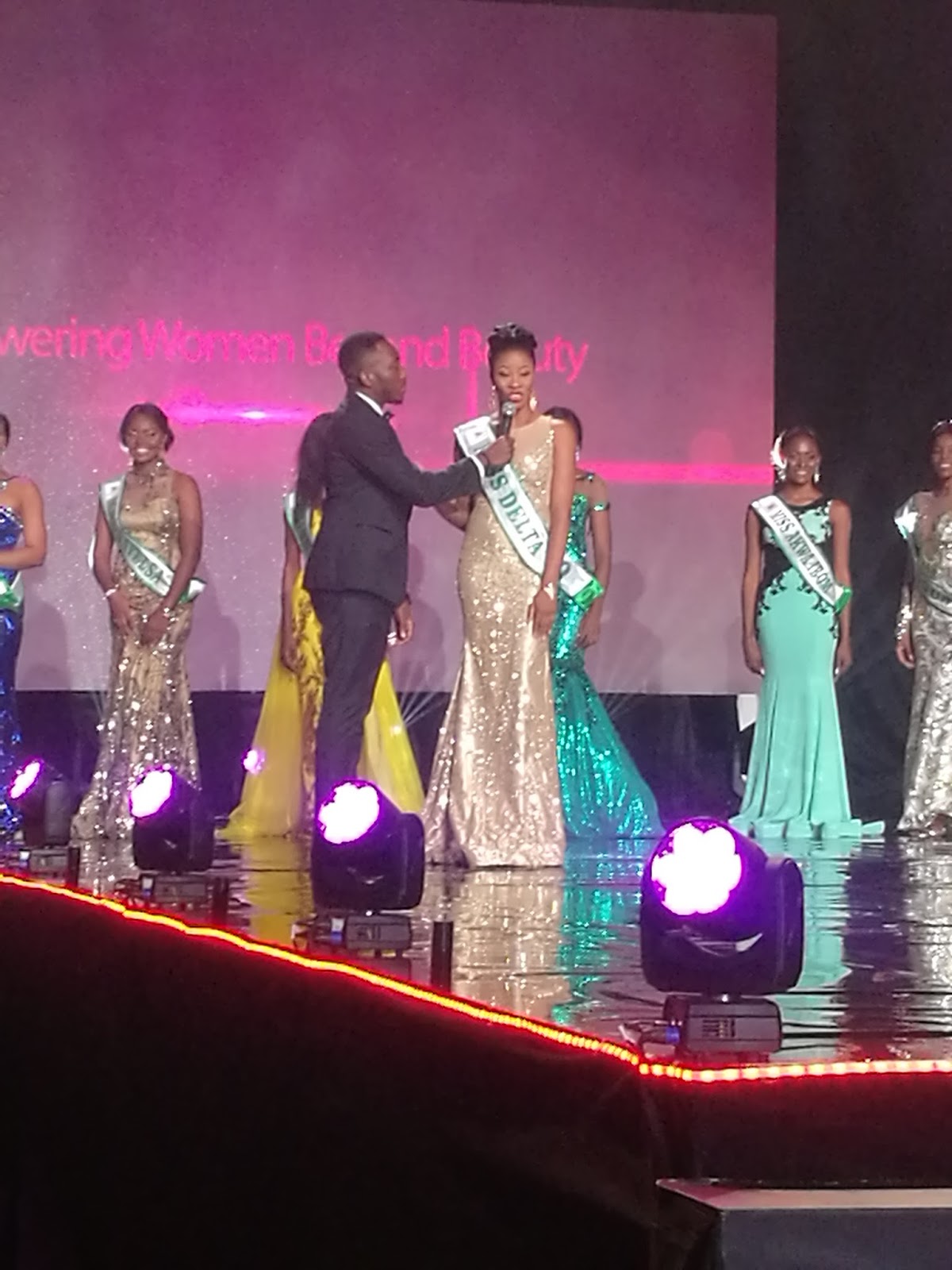 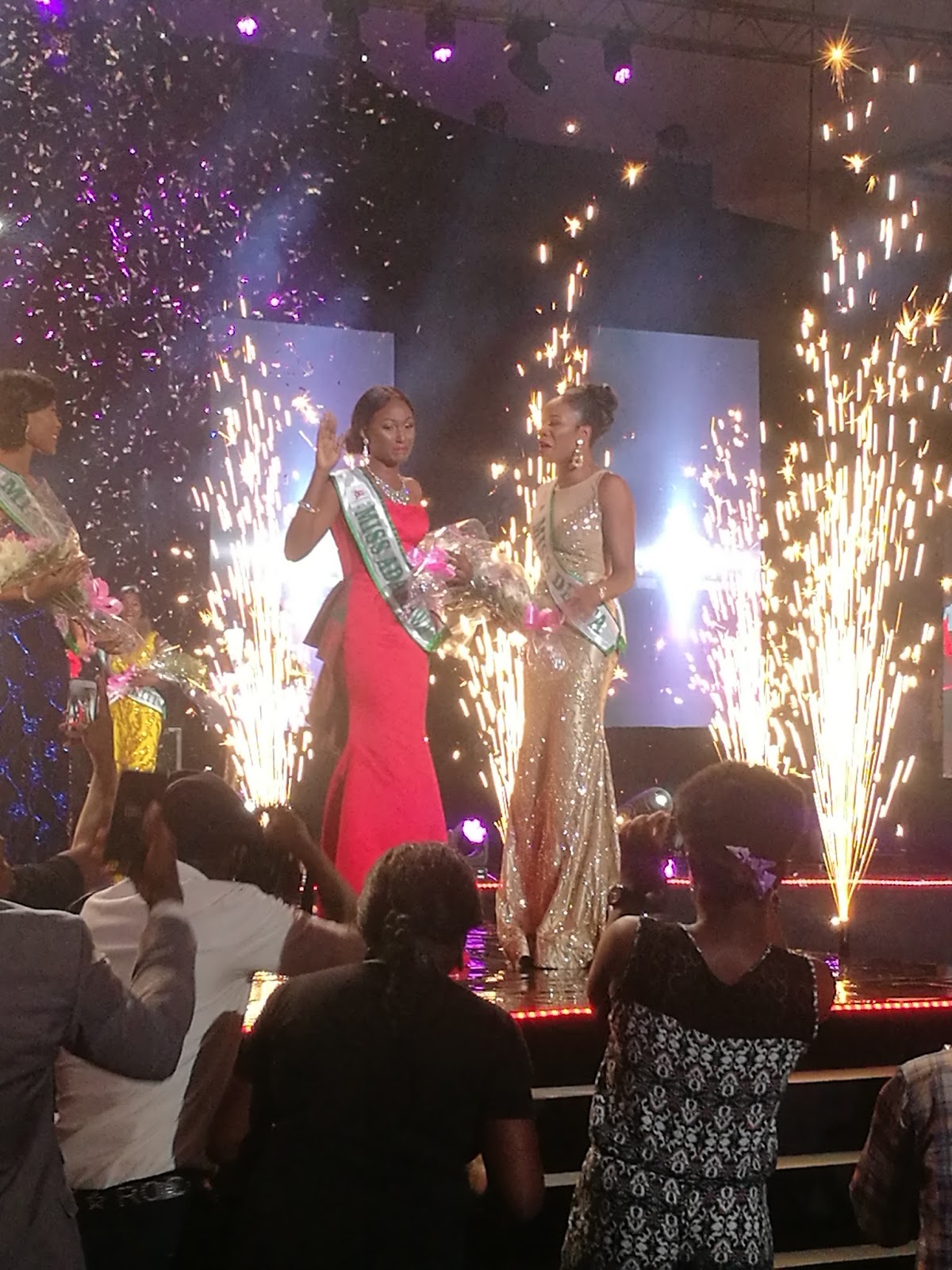 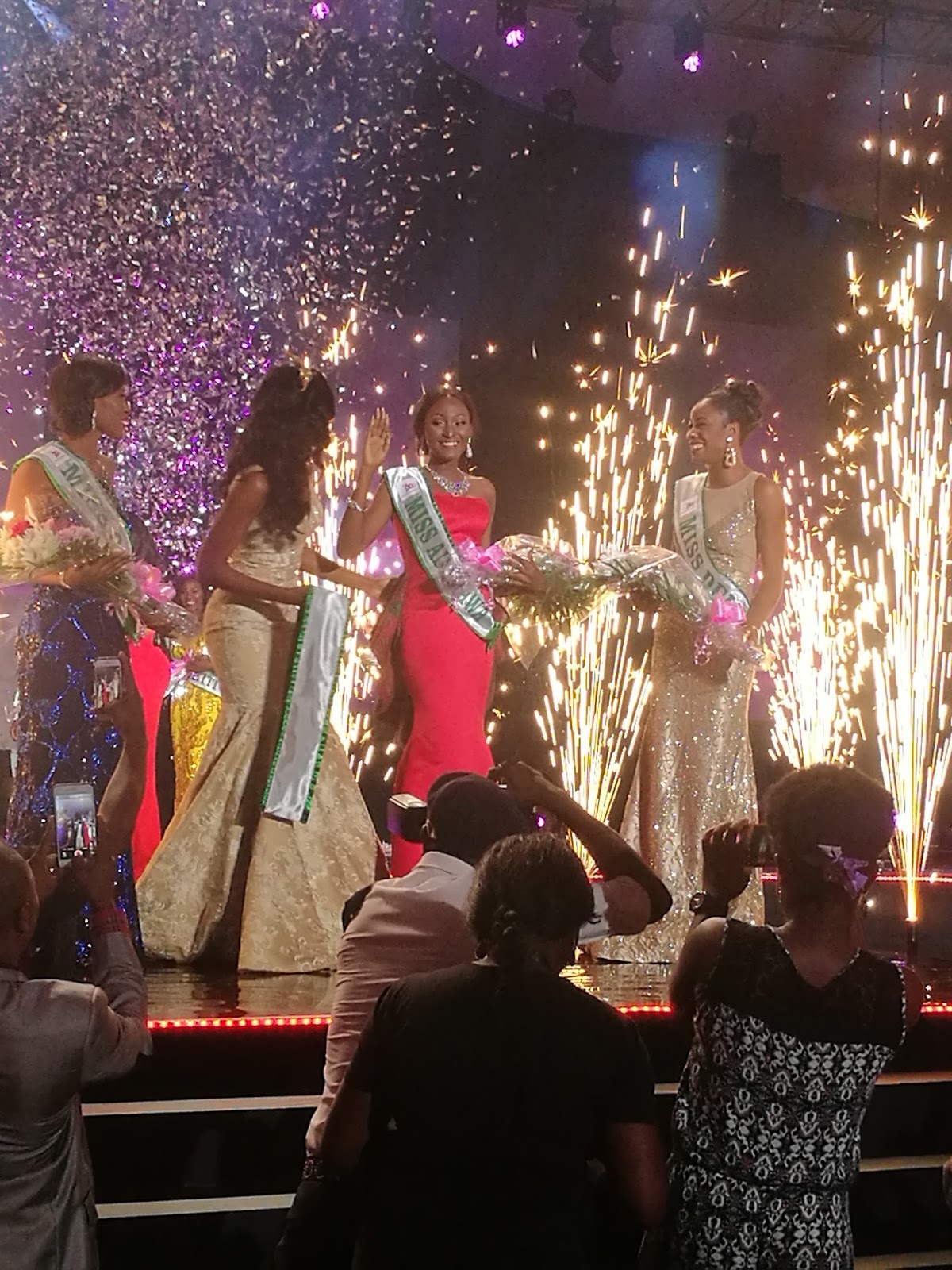 NEYA ORJI KALU & LAWRENCE IYERE’S WHITE WEDDING AT THE CHURCH OF ASSUMPTION IKOYI YESTERDAY
Christmas is Bigger, Better and Made in Nigeria!
Comment