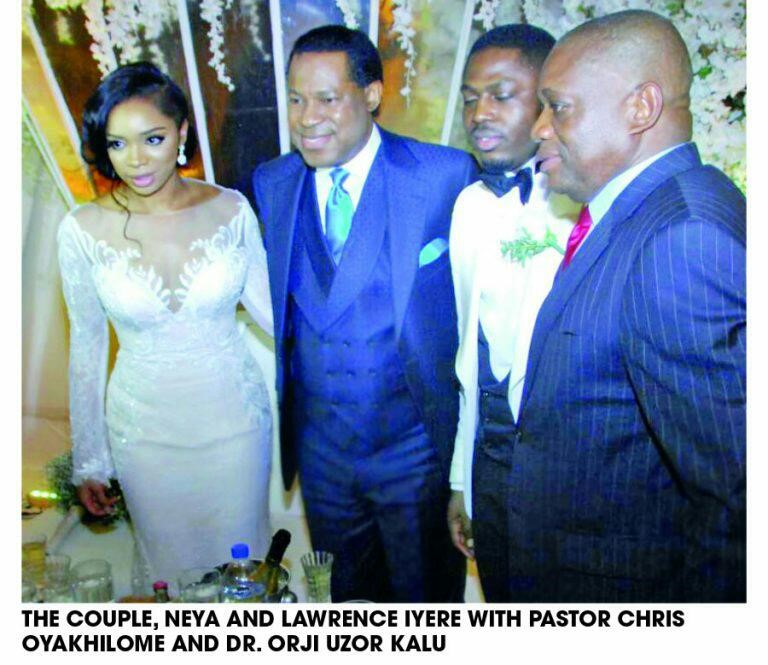 Their big wedding was only on Thursday, December 21, 2017. First with the solemnisation at the famous, Catholic Church of the Assumption Falomo Ikoyi Lagos, where some of the biggest names in Lagos worships, then to the Oriental Hotel Victoria Island Lagos, where the big time reception took place and which had in attendance some of the biggest names in Nigeria from all walks of life. Friends, associates of the father of the bride, the former Abia State Governor and top businessman Sir Orji Uzor Kalu, friends of the groom/husband and super gorgeous friends of the beautiful bride/wife.

The new husband-Lawrence maybe in the bid to show that he is not  by any means a pushover, gifted his “blushing bride now wife”, who already is very used to extraordinary trappings of wealth, at their reception at the Oriental Hotel, “a brand spanking new, Black Range Rover SUV 2018 edition”, with a brown interior as his wedding gift to her.

Lawrence Iyere, the handsome groom is a native of Irrua in Edo State, and the University of Buckingham graduate is said to have an impressive interest in the oil and gas, real estate and trading sector too. So we are sure he would be one very liquid dude to be marrying Orji Uzor Kalu’s first daughter and this union would only add to what’s already well made.

The handsome Lawrence and his now wife are said to have met a while back in school in the UK, by that we mean at the University of Buckingham London, where the relationship began which now culminated into a fairy tale wedding ceremony and into celebrated marriage now.

The besotted dad, who is the publisher of both The Sun and Telegraph newspapers amongst several other profitable investments, we are too sure wouldn’t have left his favourite child in limbo by any means too.

We are already eagerly awaiting the hearing of the pitter-patter of tiny feet very very soon too.

WHEN THE STARS SHONE DOWN AT THE WIVES ON STRIKE REVOLUTION PREMIERE!
NEYA ORJI KALU & LAWRENCE IYERE’S WHITE WEDDING AT THE CHURCH OF ASSUMPTION IKOYI YESTERDAY
Comment