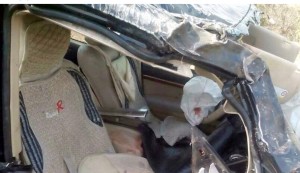 What a sad and irreparable loss, as Former Army General, who was a former Minister of Internal Affairs and AFRC Member in the regime of General Ibrahim Badamasi Babangida for 5 years from 1985 till 1990, and later became a Senator of the Federal Republic of Nigeria after retirement in 2007, Senator John Nanzip Shagaya dies after a ghastly motor accident.

The former ECOMOG peace keeping force boss (Field Commander) was said to have been returning from his ancestral home in Langtang, Plateau State to the state capital in Jos when he met his untimely death via the ghastly crash.

Senator Shagaya who used to be referred to as one of the IBB Boys was 75 year old as at the time of his demise having been born on September 2, 1942.

The late gentleman is the father of the founder of one of the biggest e-commerce brands in Nigeria and West Africa by name Konga that’s “Sim Shagaya”, who was also the Executive Chairman of DealDey before it was sold to Ringier. Konga was also recently acquired by Zinox Group which is owned by billionaire businessman Leo Stan Ekeh. One other of the late Senator’s very well known kid is none other than top fashionista/stylist “Chalya Shagaya”.

Senator John Nanzip Shagaya was one of the newest appointees of President Muhammad Buhari, GCFR, who had appointed him as the new board chairman of the NIPSS, National Institute of Policy and Strategic Studies, Kuru.