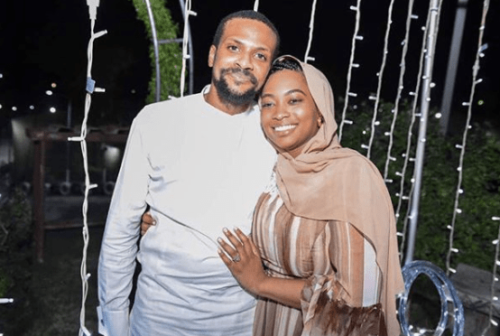 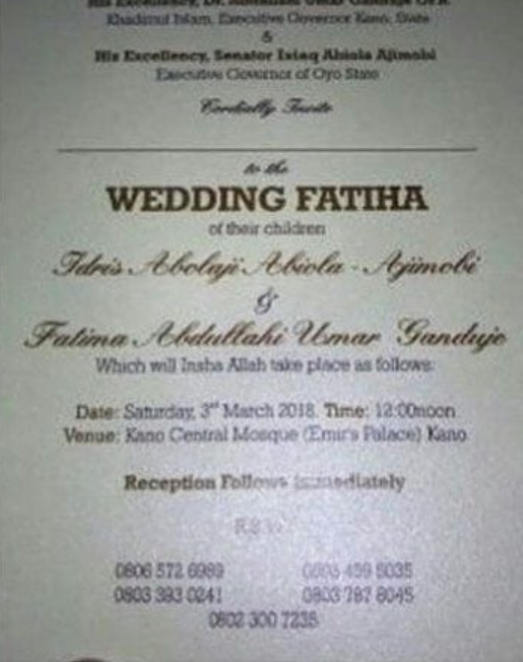 When 2 elephants unite, you all already know what to expect! These elephants here are the families of the the Oyo State Governor, Senator Abiola Ajimobi of Ibadan and that of Kano State, Alhaji Umar Abdullahi Ganduje.

Come Saturday, March 3, 2018 by noon in the beautiful city of Kano, 2 extraordinary lovebirds, who we are so into each other, that it’s bordering on something else in the persons of ‘Fatima “Baby” Abdullahi Ganduje’ and ‘Idris Abolaji Abiola-Ajimobi’, the first son of Oyo State who is the younger brother of the super stylish Abisola Kola-Daisi, and in fact the only son of the Oyo State Governor, would seal their love for each other at a Nikkai ceremony (Wedding Fatiha) that would take place at the Central Mosque, located inside the Emir of Kano’s Palace ground.

If the events that have taken place already are feelers towards what to expect, then though the Kano event is just the small part of the ceremonies, we expect the grounds to shake with the sheer numbers of heavyweights that are expected to converge in Kano come through date of the event.

We can tell you exclusively that all things are been done to make it a beautiful, very secured, top notch of a traditional occasion, that would highlight our beautiful but diverse cultural heritages to the height. What else can one expect, when the honourary father of the bride and even the occasion is the Emir of Kano himself, Alhaji Muhammad Sanusi II.

We can reveal to you without any doubt, that the AJIMOBIs and select friends would just be popping back into Nigeria from South Africa, where Idris’s “bachelor’s eve” was held.

Much as the Kano gathering is the event it is still the periphery, as the major party from the feelers we have gotten is going to be on the next Saturday following March 3, which is Saturday, March 10, 2018 at a venue not yet released but that would be most definitely in Ibadan, the Oyo State capital., where the Ajimobis, from all indications would lay out the red carpet without restrictions.

So the honey coated month of March 2018, where humongous weddings would take place is here and the wedding to open the floodgate is that of Idris and Fatima and we are already very excited. Especially as we would enjoy all the fun of this particular one.

Feelers we have gotten as per one of the other big upcoming wedding, that’s between Jamil Abubakar and Fatima Dangote though is that it might be shut out from the press/media. So let’s at least enjoy this more open one.

OUR DELICIOUS REP- OMOSEDE IGBINEDION IN PREPARATION FOR 2019 ELECTION
WHERE IS NIGERIA’S QUEEN OF HEART? CHIEF MS. NIKE OSHINOWO!
Comment