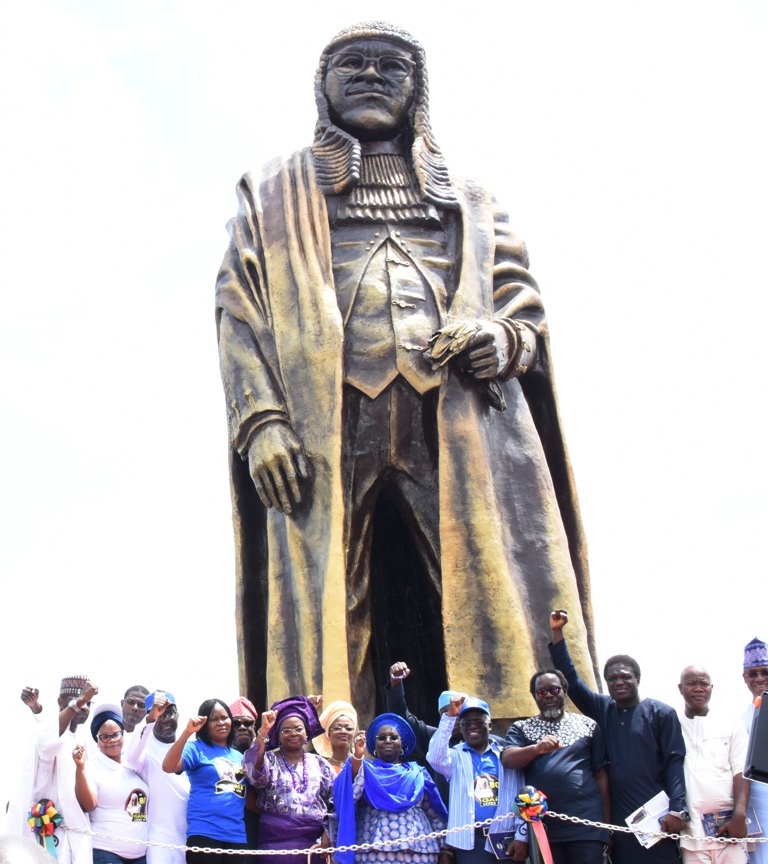 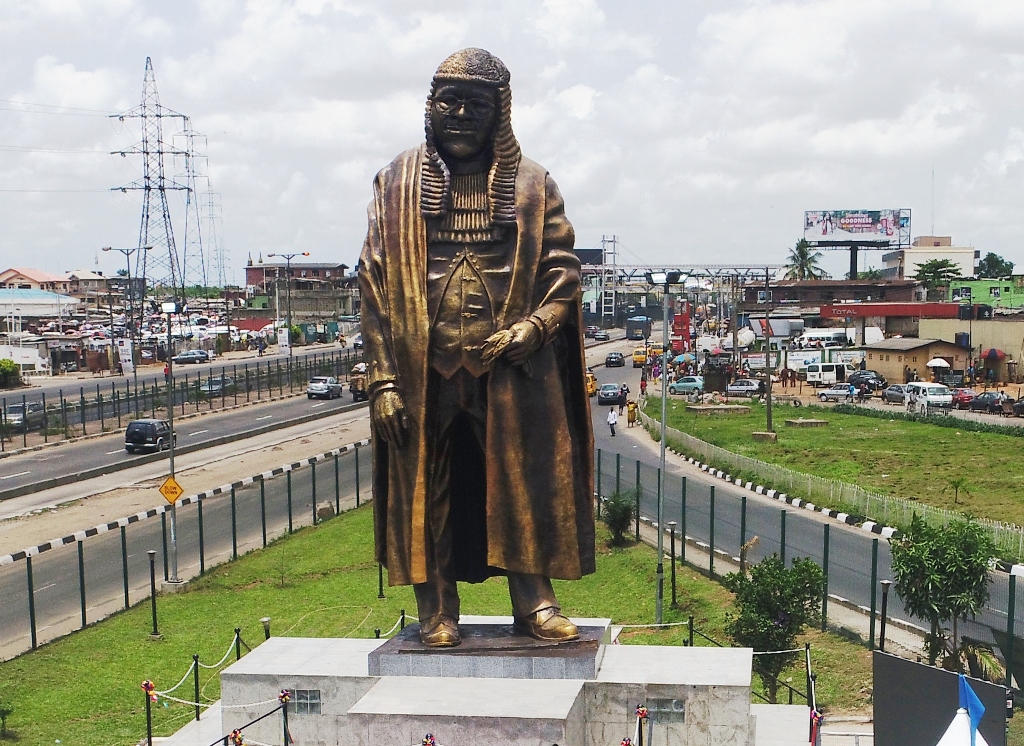 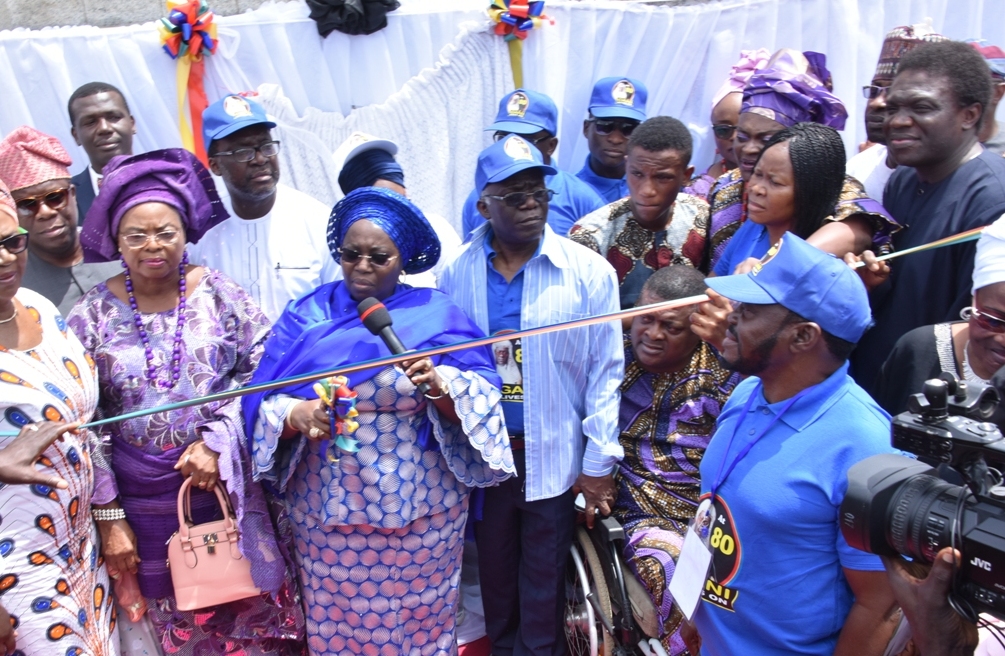 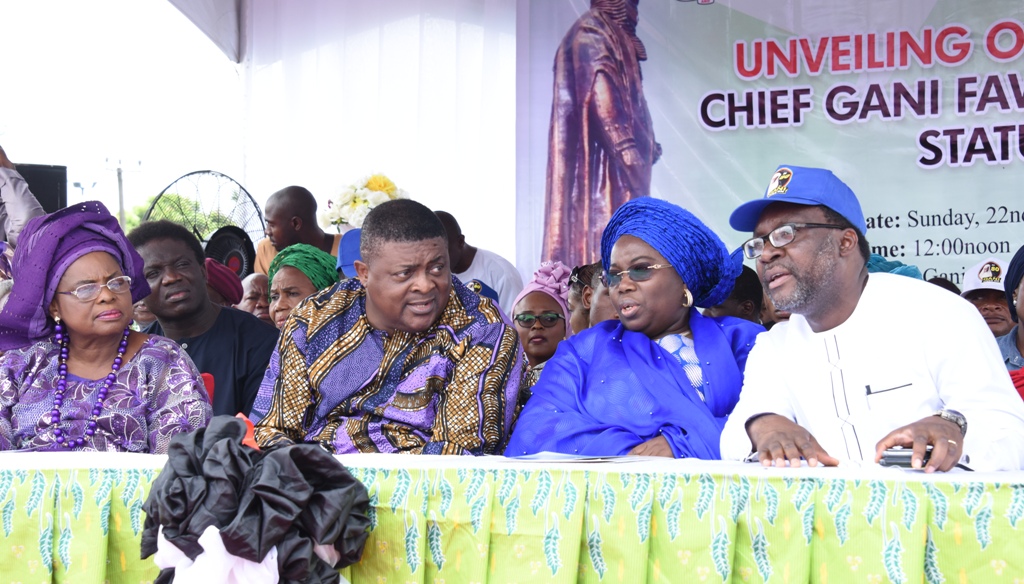 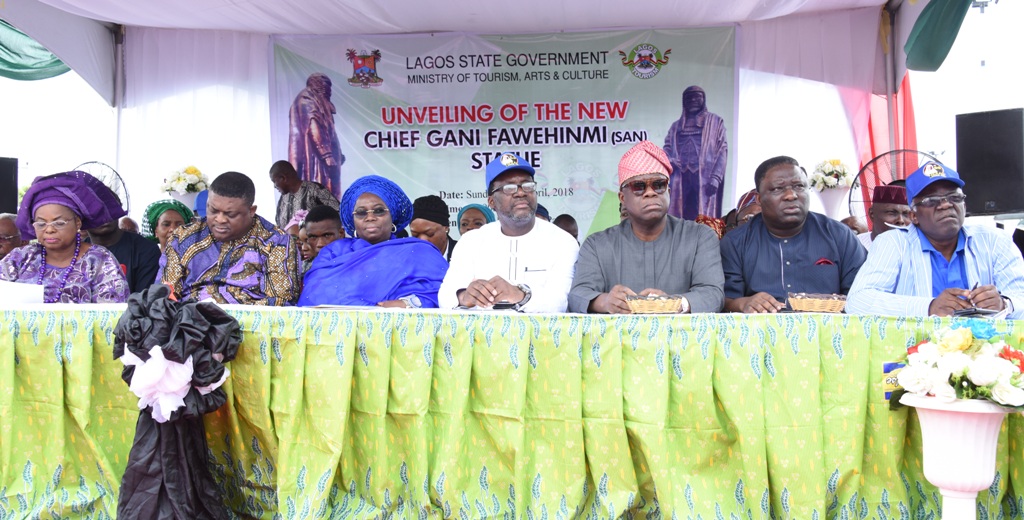 Lagos State Governor, Mr. Akinwunmi Ambode on Sunday unveiled a new statue of the late legal luminary, Chief Gani Fawehinmi at the ‘Liberty Park’, in Ojota, saying that the 44-feet edifice symbolises the phenomenon that the rights activist represented in his life time.

The unveiling of the statue, in commemoration of the 80th posthumous birthday of the late icon, the Governor said, was an affirmation of his administration’s commitment to celebrate personalities whose action have helped to define the fortune and spirit of Lagos State positively over the years.

Eulogizing the relevance of the personal sacrifices made by Chief Gani Fawehinmi in leading the struggle for attainment of human rights and dignity especially during the military regimes which dehumanized many Nigerians, Governor Ambode said the late human rights activist would continue to remain a hero and role model for many till date.

“We celebrate the invaluable contribution and personal sacrifices of Chief Gani Fawehinmi in the campaign for human rights and dignity, especially in Lagos State where he spent the greater part of his life.

“Chief Gani Fawehinmi loomed large in the minds of the people, especially the underprivileged and vulnerable masses for whom he was ready to lay down his life. In the hallowed corridors of the Law Courts where he fought many battles, he was revered as a titan. Also his acts of philanthropy were borderless. He remains a hero and role model to many till date,” Governor Ambode said.

The Governor, who was represented by the Deputy Governor, Dr. Oluranti Adebule, also seized the occasion to reiterate the commitment of his administration towards advancing human rights and upholding of social justice at all time, adding that his administration would continue to draw inspiration from Chief Gani Fawehinmi’s struggles and ideals in its quest to make life meaningful for Lagosians.

“Although Chief Gani Fawehinmi is no longer in our midst; like all great men, he lives on in our hearts and memories. We will continue to keep his ideals alive and pass it on to the next generation. He will continue to inspire us as we forge ahead with the missing of building a better society. This monument stands as a testimony of his strength and courage.

Responding on behalf of the family, the son of the late activist, Mohammed Fawehinmi thanked the State Government and Governor Ambode, saying that apart from being a befitting representation to the legacies of their patriarch, the Statue would place their father’s name on the global map.

“I am totally overwhelmed. I want to say a big thank you to Lagos State Government and another very big massive thank you to Governor Ambode. In all honesty, he is the man I least expected this to come from.

“We understood when former Governor Fashola started this with a smaller statue and we were all glad that at least he remembered our mentor, our father, our leader in the human rights struggle and senior advocate of the masses. But now seeing this, I now started to say to myself that Governor Ambode has placed the name Gani Fawehinmi on a global map,” Mohammed said.

While describing Governor Ambode as a very reputable accountant and one of the most outstanding Governors in Nigeria, Mohammed said the Governor was the first in the history of Nigeria to do something such gigantic, saying that the statue would enter the Guinness Book of Records.

Mohammed, who alluded to the massive infrastructural renewal and efforts to make Lagos rank among top global cities, also announced the decision of the Fawehinmi family to endorse Governor Ambode for a second term in office to continue the good works across the State.

“We hereby endorse Governor Ambode for second term in office to continue the good works in the State,” Mohammed said.

In his goodwill message, rights activist and Senior Advocate of Nigeria (SAN), Femi Falana described the statue as one of the best in the country, and thanked the State Government for honouring Fawehinmi with such imposing edifice.

“The monument we are unveiling today is one of the best in the country and it has to be so. We want to thank the Lagos State Government for the investment in this edifice. We can assure you that many Nigerians or anybody who enters Lagos through this road will want to find out who is here and every day we are going to teach lessons about Gani Fawehinmi.

“We thank the Lagos State Government for rebuilding this statue. We were wondering when the former one was collapsing but we are sure this one can never collapse. It is very solid and very strong,” Falana said.

On his part, National Secretary of National Conscience Party (NCP), Comrade Ayodele Akele, said the edifice was a wonderful 80th posthumous birthday gift to the family and associates of the late activist.

Akele, who spoke on behalf of the NCP, a party founded by late Fawehinmi, specially thanked the State Government and Governor Ambode, saying that the government deserved to be commended.

“This would be auspicious gift to the posthumous 80th birthday of our mentor and this is wonderful. For doing this to the memory of Chief Gani Fawehinmi, my humble self, National Conscience Party (NCP) and all its associates across the world say a big thank you to the Lagos State Government and particularly Governor Ambode,” Akele said.

“We appreciate the Lagos State Government ably led by Governor Ambode for the honour done to our mentor, our leader, late Chief Gani Fawehinmi. For us to identify with this occasion is a total commitment because when the late chief was alive, he was with us totally. He was there on the streets joining our protests and several times when we were being harassed with black market injunctions, Chief Fawehinmi was always there to defend us,” Aremu said.

On her part, rights activist and President of Women Arise, Dr Joe Okei-Odumakin commended the State Government, saying that the legacies of the late Fawehinmi would continue to be remembered.

“We are gathered here today at the statue of a great life wire of the human rights and pro-democracy movement. I want to specially thank the Lagos State Government. I know that Gani Fawehinmi continue to live in the unconsciousness of the people,” she said. 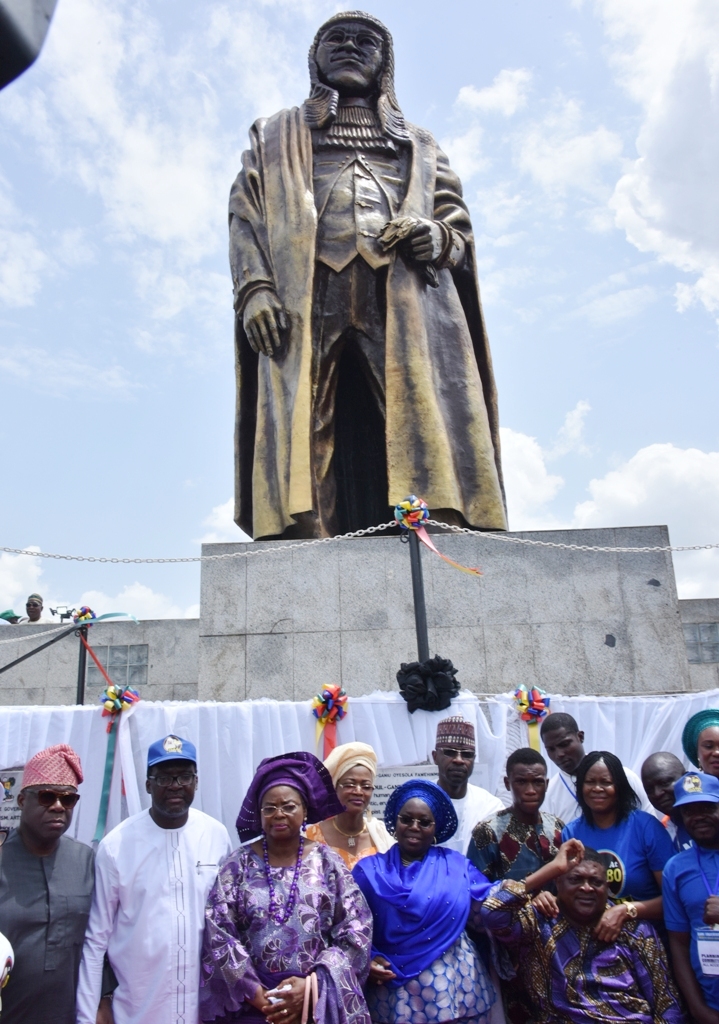 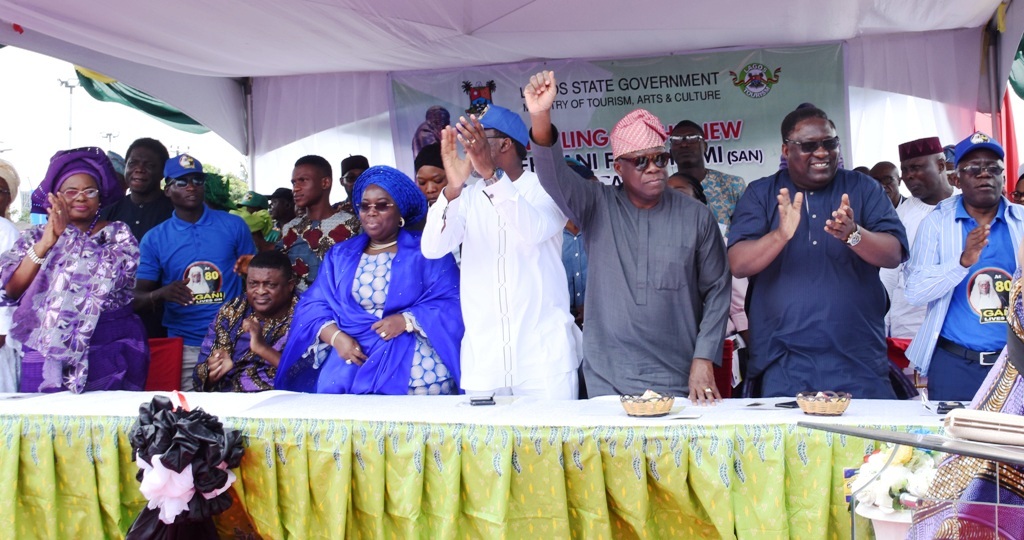 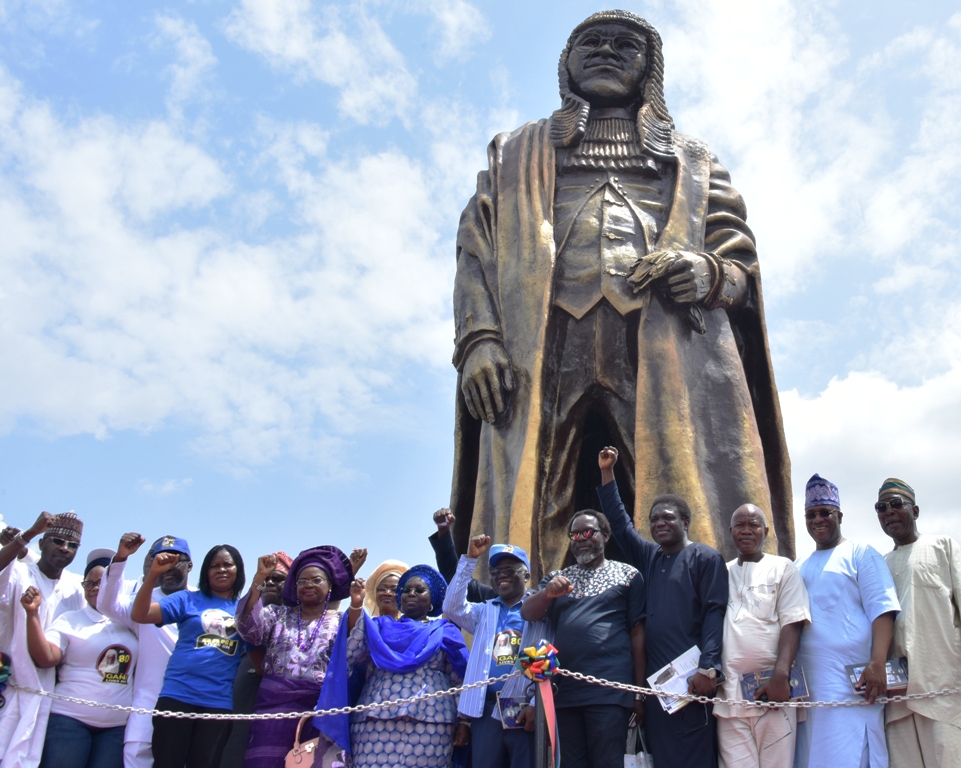