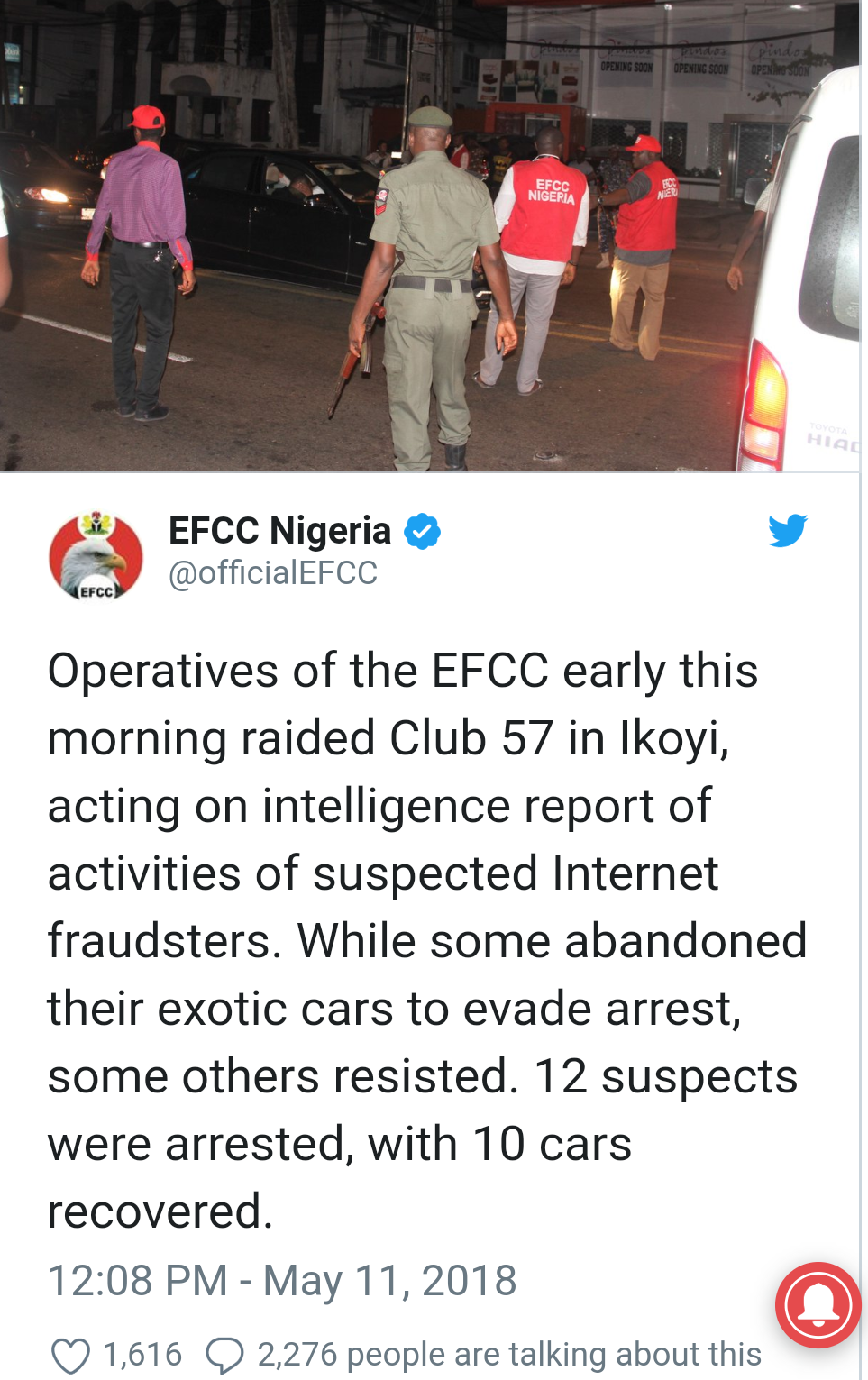 Just like the title above says it, the EFCC might have changed it focus and may now have their attention focused on any of these young lads who frequents the night spots, joints and bars with their humongous machines on the mission to show-off, while spending their ill-gotten wealth in such ways and manner, that beggars belief.

Just yesterday alone, at a well known joint on Awolowo Road, Ikoyi, Lagos, Club 57 to be more precise, the long arm of the EFCC clamped down on some of these fly boys and their entourage as they were getting out of the joint after a good night of unbridled fun. It was a sting raid, so they all weren’t aware of what was coming and so were not prepared for the surprise that came their way! So with these particular successful raid, many are already suggesting that the others are now going to be loads more careful and that those who do not have the businesses to back the lifestyle they live, are either going to shift their bases, run away for a bit if things are too hot or go underground for a while till things would relax again.

The EFCC on their verified Twitter handle gave credence to the raid- “Operatives of the EFCC early this morning raided Club 57 in Ikoyi, acting on intelligence report of activities of suspected Internet fraudsters.

“While some abandoned their exotic cars to evade arrest, some others resisted. 12 suspects were arrested, with 10 cars recovered.”

Mind you, many of the very big ones in the business, have solid backings from what we have heard. In fact some have the support of heavyweights in the force, behind them, who are said to be on their payroll, hence their very brazen attitudes.

For those who don’t know, you have to be out at some of the joints in town to see how many of these boys intimidate others when they go on their spending sprees. Imagine that you go around and you see young guys driving some of the most humongous machines you can ever dream of and they have all not being smart enough to cover their backs with some legitimate businesses they could cover their asses when the push comes to shove. If the kind of raid that happened yesterday is sustained for a bit, then the night club owners and their businesses are the ones that would majorly feel the brunt, as these boys are most of their best customers/clienteles.

We met a young guy sometime last year, whose garage is worth at least near a billion Naira, if not more. He lives in a rented apartment somewhere, with things inside the house that’s worth more than a hundred million, several more millions worth. This young dude is still in his 20s! He bought a brand spanking new Ferrari, that he air freighted in from Dubai after the purchase. He also owns a white G63 GGuard, we hear he also owns a Maserati and a few others. He drove and crashed, totalled his Ferrari under 6 months! After he had bought the Ferrari, he had also made up his mind to get a Lamborghini too! This is just one case.

There is also the case last year about that wedding, that got tongue wagging for several weeks. No wedding till date has beaten that wedding, including that of Dangote’s daughter by display of opulence. The cars in the entourage of that wedding were more than 35, atleast 25 were brand spanking new G Wagons, driving by unknown young boys, a few Range Rovers were in the mix and the bride and groom rode in a Rolls Royce or 2. The display of opulence was so much that even some moneyed adults were intimidated. Just 2 of the guys sprayed 8million plus Naira, hard currency flowed like it was pure water. In the midst of the party were even go-go dancers doing strip tease. King of Fuji performed at the party and was sprayed endlessly for a long period of time.

If you want to catch many of these dudes who are not leaving in their own apartments either built or bought or rented, then you can either check Eko Signature, Continental Hotel and a few other places, where they have turned to home and you are too sure to catch many of them at these places having fun, with their posses and girlfriends etc. Imagine that last year alone a particular one who went haywire spending at a club, where one night’s drink amd revelry bill was more than 10million Naira, stayed close to a year at the Signature!

How come many of these boys are still hitting paydirt daily! Inspite of the fact that or even as the scrutiny on them have not abated? You must understand very well that there are levels of operations in their type of business, differences in operations too. The mid level operators are those engaging in Yahoo-yahoo! The advanced level guys have moved to bigger things these are the G-boys. These ones by virtue of technology make use of applications that helps them to evade many of the firewalls of major companies, whose accounts they have been able to penetrate like they are the authorised people in charge and once in, they then transfer major funds in large amounts that are possible, from those accounts to other accounts, where they now share money with those account owners they have transferred to on 70:30 or 60:40 basis. Many of the account owners are abokis and others who deals in money transfers etc.

These boys believes wholeheartedly that they are not doing anything wrong, since they are dealing with companies and not necessarily individuals. There are also some whose advanced level border on the diabolical too, but that’s a story for another day. You have some of these G-boys everywhere. And they also have many working for them too. Many have rented or leased apartments all over Nigeria, while they have some abroad too cutting the deals across the pond.

Would these focus on them help reduce the situation? Let’s wait and see!

AND SO IT SEEM LIKE THE APC HAVE SHOT THEMSELVES ON THE FOOT AGAIN! AS KAYODE FAYEMI WINS THEIR PRIMARY & IS NOW THE PARTY’S CANDIDATE FOR THE JULY 2018 ELECTION
GOVERNOR WILLIE OBIANO AND ELEGANT WIFE EBELECHUKWU OBIANO DAZZLES IN AMERICA AS THEY WENT ON SHOPPING SPREE!
Comment