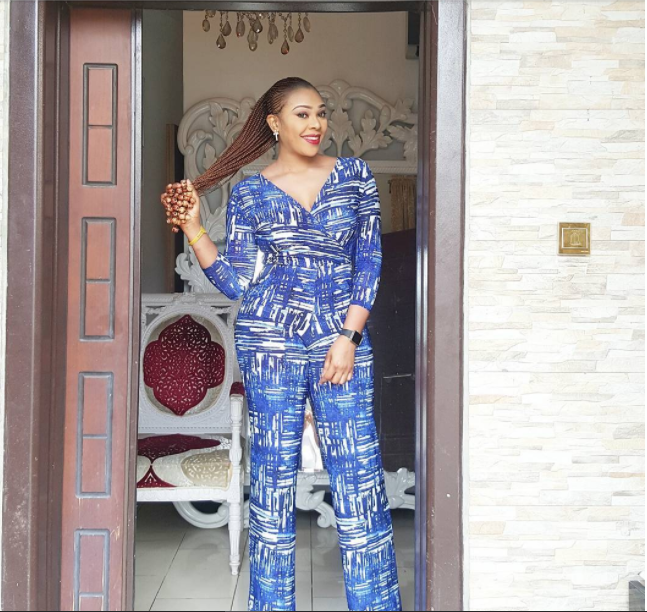 A few months ago November 19, 2017 to be more precise, Ehizogie Ogbebor’s wedding to her beau-Chief Kenneth Bramor shook the social media as it was one of the biggest events of that year. She and her super rich husband spared no expenses to make the wedding party one to reckon with, every which way one can think of.

In fact, 2 cars  (Toyota Camry) were even given out to 2 lucky guests, free of charge at the humonguous wedding, making the unbelievable gifts unprecedented. It was a display of wealth and the best of Benin tradition and culture, which is quite rich and a beauty to behold in its splendor. Ehi is Bini from Edo, her husband IS from Warri in Delta State. Those who had attended the wedding then, exclaimed at how they were swept off their feet and were cared for very well.

Now months (7 months to be more precise) after that very impressive event/occasion that had the whole social media agog and salivating and with many making different comments both positives and negatives, the impressive CEO of Sayaveth Interiors and Hotel on the island, who was already a mother of 2 from her previous relationship/marriage has dropped a new, bouncing baby girl from the information at our disposal. This new baby makes it the 3rd for the beautiful, very stylish and in your face Ehizogie Ogbebor, now Ehizogie BRAMOR, it meant she was at least 2 months gone at the time of her wedding party, not that it was any issue at all.

When Ehi as she’s mostly called by close friends and even those that she merely know, got married her oil and gas magnate husband -Chief Kenneth Bramor, she came in as his 3rd wife. But whichever her position is, she immediately became the nos 1 in the heart of her big boy husband, by virtue of her exposure and who she is,… … a prominent personage. She was a social media sensation, who enjoyed so much the notoriety that Instagram brought her way, as she was cool with it and by herself used to put on it a lot of her stuffs, making her quite popular and some sort of celebrity.

The graduate of Biochemistry from the Ambrose Alli University, who used to work for an insurance company in Lagos before she established her own businesses remarried after being divorced for a whole decade. She met her husband to be then 3 years ago at her interior company and one thing led to another and both fell madly in love with each other. They then got married on November 19, 2017. Now after her humongous wedding and 7 months later God has blessed the couple with a child of their own, so the balling continues.

Congratulations to her. Baby and mother are doing well.

BUT SERIOUSLY WHO THESE DUDES- ABOLO, SELF PAID & B NAIRA?
TIWA SAVAGE TEASES OTEDOLA IN NEW SINGLE
Comment