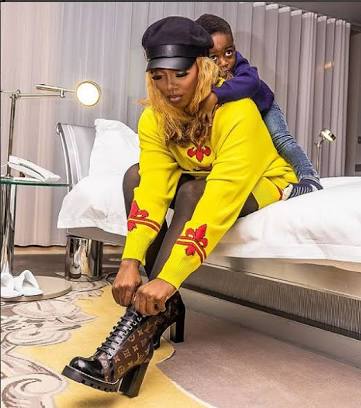 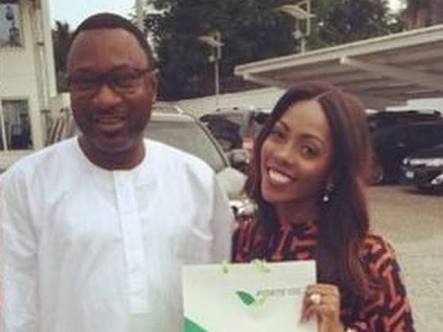 “Music expresses that which cannot be said and on which it is impossible to be silent,” a philosopher named Victor Hugo once said. This quote must have held true for the Queen of Afro Pop, Tiwa Savage, as her latest single titled ‘Tiwa’s Vibe’ reveals. In the feel-good, mid-tempo song produced by Spellz and released two days ago, the Mavin Records’ First Lady expresses that which is impossible for her to be silent about. She sings:
If you want to touch my body
You gats to spend the money
Bottles must to pop o
F.O spray the money o
While nobody can say for a fact what motivated the multiple award winning songress’s serenading line,she is no doubt extolling the benevolence and at the same time appealing to the fantasy of Chairman of Forte Oil Plc, Femi Otedola, whose generosity is legendary and who has been benefactor for many artistes . Tiwa became the first artiste to bag an endorsement deal with an oil and gas brand in Nigeria when Forte Oil chose her to be its brand ambassador. That campaign was one of Tiwa’s first upon her return to the music business after she had taken a long maternity leave away from the music scene.
That Tiwa considers F.O. ( acronym for Femi Otedola) as a godfather is not in doubt, and she does not make any pretense about this. Her social media platforms are replete with images showing her affinity to the man who has continued to be a pillar of support for her. Otedola’s daugher, Florence Otedola, notably known as DJ Cuppy, has been one of those jamming to Tiwa’s Vibe, as shown in one Tiwa’s latest Instagram uploads showing DJ Cuppy tapping toes and singing the song along.
TagsENTERTAINMENT AND LIFESTYLE FEMI OTEDOLA MAESTRO's MEDIA MUSIC NEW SINGLE Spellz TIWA SAVAGE Tiwa's Vibe

SAYAVETH BOSS EHIZOGIE BRAMOR DROPS NEW BABY GIRL
AND SO IT SEEM LIKE THE APC HAVE SHOT THEMSELVES ON THE FOOT AGAIN! AS KAYODE FAYEMI WINS THEIR PRIMARY & IS NOW THE PARTY’S CANDIDATE FOR THE JULY 2018 ELECTION
Comment