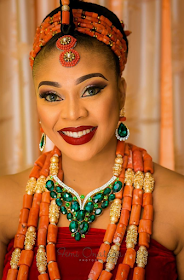 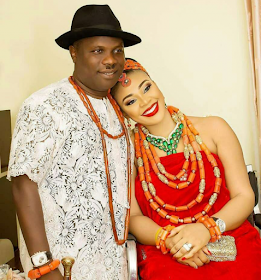 Ehizogie Bramor the Sayaveth interior brand owner had a humonguos wedding just about a year ago, 9 months ago to be more precise. So massive was the wedding that 2 brand new Toyota Camry cars were gift wrapped for 2 lucky guests at the wedding. The ceremony was covered by the media and splashed all over the social media too and it enjoyed enormous audience, majorly because Ehi herself enjoys the attention and she splashes every exciting thing about herself on Instagram for all to see and salivate on.

Madam dropped her new bambino, a gorgeous baby girl at that, only a few weeks back, a super happy occasion we believe that was, making the new baby her 3rd child, 1st one as the 3rd wife of Sir Kenneth BRAMOR though, who is the impressive Warri oil and gas multimillionaire.

Now the unconfirmed gist sifting in and trying to gain some ascendancy, and that some people are so very eager to sell at all cost is that, that marriage of only just 9 months, a relationship that began in 2015 which was celebrated with so much pomp, might have crashed or hit the rock! What????? If that be true, it would have meant that even this 2nd missionary journey too, like the 1st that produced 2 adorable kids has followed the same path. It would also mean that, maybe people should just avoid all the unnecessary fanfare of society nuptials and just have a quiet thing, devoid of all unnecessary attention, so that if situations like this come at all, not that one prays for that, it’s just off the radar and not embarrassing at all.

We haven’t yet fully believed the unconfirmed gist though, reason being that we know that Ehi being a social media sensation, who is quite savvy with the online shenanigans herself, who doesn’t necessarily care how people take her views, would have put such info on the social media by herself if it were so already.

So over to you Ehi, is everything intact or has it gone south?

HOW TRUE CAN IT BE, THAT KIKA & CHIOMA OF GOOD HAIR ARE NOT ON GOOD TERMS
DANCING MAESTRO SENATOR ADEMOLA NURUDEEN ADELEKE EMERGES AS THE PDP GOVERNORSHIP ASPIRANT FOR OSUN STATE.
Comment