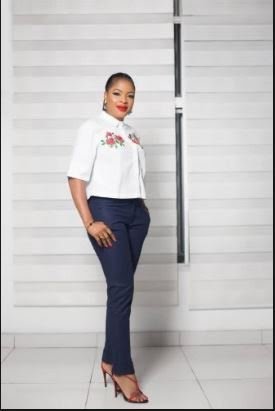 The palace of the most revered King from Africa, that’s the Palace of the Ooni Adimula of the world, his imperial majesty, Oba Adeyeye Babatunde Enitan Ogunwusi, the Ojaja II, has come out to debunk in very strong terms the purported upcoming wedding of the season of the bachelor monarch, who incidentally is being counted as one of the most eligible bachelors in Africa right now, after his 2 former marriages had hit the rock. One of the marriages was when he was still a young prince, while the more recent one was to the famous Olori Wuraola Zainab Otiti-Obanor.

The subject matter of the speculation or marriage tale is none other than an outstandingingly gorgeous beauty and brains (highly cerebral) by name Temitope Adesegun, who is the Co-convener of Hopes Alive Initiative. She used to be the personal assistant to the former SSG of Lagos State at a time. The well schooled lady, went to Harvard, Oxford, Instead, Cambridge after she had 1st graduated from the University of Lagos many years back.

How those who came up with the supposed tales by moonlight got their story of the impending wedding and subsequent marriage we do not know, but a close aide and an in-law of the revered monarch, in the person of Prince Jide Fadairo, who is married to one of the lovely sisters of the king and who should be in the know, was the one that debunked the tale, which had already gained much traction.

People, in fact the whole world are very eager to know who the king is going to marry again and how soon too, as some have claimed that it is not too good tradional wise for a king, especially of the caliber of the Ooni on the throne, the very one on the stool of ODUDUWA, to remain a bachelor for too long. Also the curiosity to know is also because this particular Ooni is still a very young in his early 40s and infact an handsome hunk of a man too, who is also very stylish at that, one who many very willing ladies would love to have as husband.

In debunking the tales, Prince Jide Fadairo the CEO of House of Oduduwa Foundation and husband of Princess Folasade, the monarch’s eldest sister, said that, “it was a fairy tale gone too far.
“Ooni’s marriage cannot be done secretly, it involves not only the royal family, it involves Yoruba custom and a lot of elders and our tradition are to be taken into cognisance. Please dismiss the story, it is another fake news.

Then another confidant and friend of the Ooni, Mr. Muyiwa Leroy Afolabi went further to say

” Kabiyesi will carry every Ile-Ife’s sons and daughters along whenever it’s time to pick another Olori (Queen) for us.

Prince Fadairo went further to say, “the time is not propitious for the monarch who is immersed in the renaissance of Yoruba culture and promotion of the race’s customs and traditions globally.

“That’s not on His Imperial Majesty’s mind. Marriage is not something he wants to do right away. Many names have been bandied around but I can tell you they are all false, just like this case.”

Case closed for now then. Gbam!!!