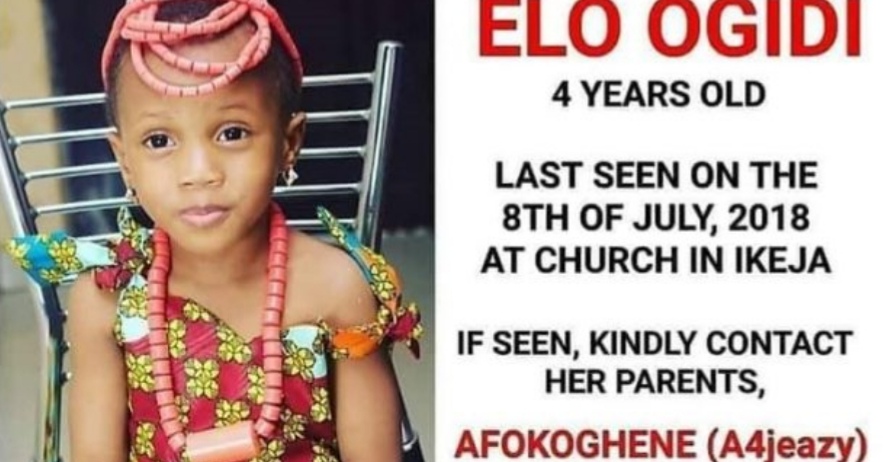 What joy after being found, after many days of unbearable anguish and trepidation looking for a 4 year old by name Elo Ogidi who was stolen at the HQ of Chris Oyakhilome’s Christ Embassy Church, Oregun, Ikeja, Lagos.

The beautiful little girl was last seen on July 8, 2018 at the church. She was last seen with the maid at the children’s thanksgiving service before she apparently disappeared into thin air. She with her parents, other siblings and their maid had attended the church service on the aforementioned date.

Her dad-Mr Okpogene Ogidi has since confirmed that she was found at an orphanage in as far away as Benin, in Edo State! He also confirmed that some suspects that might be complicit in the case, have also been arrested too!

Just imagine that it took only a few minutes for the perpetrators of the evil act to steal away the little girl! The maid had just gone to get slices of cakes that was shared for the kids at the service, for Elo and her 2 other siblings, only to get back and she wasn’t on her seat no more! After a frantic search and questions asked before another child claimed to have seen a woman leading the little girl away inside the church!

The case was immediately reported at the Alausa Police station, who thereafter their initial investigation transferred the case to the Anti-Kidnapping Unit of the SCIID, Yaba. The Police were able to trace the little kid to an orphanage in Benin, Edo State just only yesterday since July 8!!!!

Just imagine the joy, the elation, the relief, that must have enveloped the household of the little girl upon receiving the good news and even by extension their Church, Christ Embassy where she was abducted from! The trace for the lost, but now found was possible because the abduction/kidnap/disappearance was reported in the media and someone located and identified the little girl and it was then reported to to her dad and the police were alerted, who did the trace and she was found at the orphanage yesterday evening!