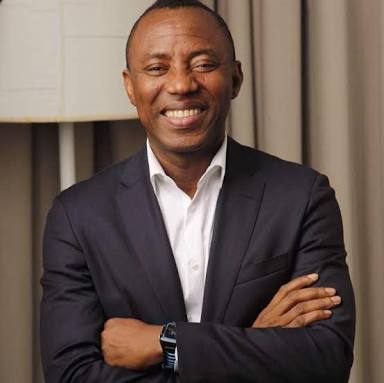 Omoyele Sowore is either a man who sees into the future, one who is specially blessed with the great gift of clairvoyance, or he is just one man that is a rabble-rouser bent on just being an attention seeker. Love him or hate, you cannot ignore him though.

From his many utterances, it is obvious that he doesn’t think the old way at all, but one man who only thinks outside the box about nearly everything, so he is either a maverick, who might have the midas touch or a megalomaniac just all about trouble! His ideas are just the kind that hits you in the face. They hit you at first and you are like this is totally and utterly crazy, but after a while of pondering and you think it through, you are now like wondering,….. Hmmmmmmm that all things being equal, though the ideas might be crazy, but it/they could only work out in an ideal situation,…. only!!!!

Same way that Sowore started his social media foray many years ago, with many in the traditional media not giving him any thought to succeed, thinking then that it was impossible for the new media to take over or even have any meaningful impact, but see what has happened now, maybe to ignore him in this his new quest, would be at everyone’s peril.

The man who many believe is a proper youth in every sense of the word (him being just 47) is already stirring the hornets nests vigorously again!!!!! Is it a ploy to drive attention at all cost or are is thoughts those that are very well thought out and very strategic positioning?

Can a law legitimizing or legalising weed ever, ever be passed by the legislators in this our country called Nigeria? Especially in a country that looks at everything from the prism of religion? Either the Christian or Islamic faith or even traditional religion!!!!

Can it ever be possible for us to actually follow the current trends around the world too in its full entirety, especially since we love to be seen to be following what the so called advanced countries do or are doing or better still what is trending?

So Mr. Presidential aspirant, Omoyele Sowore, 47 went ballistic yesterday, advocating that his Presidency, if he were  to win the election to become the President of the Federal Republic of Nigeria that he would turn ‘Weed, Igbo, Ganja, Indian hemp, Marijuana, Kube, Klaro, Arizona, Loud etc into an “exportable gem/commodity” that would earn the country hard earned forex, like Cocoa, Crude oil etc!

On the face of it, people couldn’t believe the audacity of the idea as he spewed it out, the shock and the comedy of it all was evident, as those at the place where he said it, nearly laughed their stomach out, maybe even some would have thought he might be high himself!!! And so some people must have thought, did this guy who actually wants to become a President, just come out with such a preposterous thought!

Some would have immediately in their mind tagged him as the ‘ultimate joker’, someone never to be taken serious at all ever again! Someone that might be high in his own supply!!!! But wait a minute! Wait a minuteeeeeee!!!! Let’s just look at and examine what he has suggested critically and analytically without any form of bias at all.

One of the fastest growing stocks in America right now is said to be weed! Marijuana or Indian hemp also known as weed is tagged medicinal abroad in some countries, especially in the US. According to available information, those who invested in it stocks earlier in the year have had their stocks value multiplied over 3 times!

Weed is now legal in many other countries and most probably would be in more countries pretty soon. So since it is gradually becoming illegal no more, then it has become a market, a market has value, value means it can bring good returns on investment, all this means is that it has become a business that people invest in, can invest in and exploit opportunities from. So why not then exploit the market?

According to Sowore, there is the overabundance of the commodity in Ekiti and some other states too. So instead of it been burnt and nothing earned from it, why not Export it to those who have legalised it! !!

Some people are already falling in love with the idea. Some are even claiming that it’s probably the most pragmatic idea ever thought about in a longwhile. And to buttress their point, they have said, it is not about smoking ganja here, but about it is about exporting it to those countries that have already legalised it. So those supporting the idea are saying why not???

Ganja farming for those engaged in it, is now a legalised multimillion dollar business. Infact in Holland, where prostitution is even legalised and regulated, Ganja smoking and farming is a big deal. OK let’s be more precise (accurate) and correct here! Though it is an ‘illegal drug in Holland’, it is however ‘tolerated’ to a certain extent! Meaning the authorities would turn a blind eye to possession of not more than 5kg. Coffee shops, which are in their hundreds can have not more than 500g at a time in house, meaning one can just sit and other for Ganja!!! Infact, permit for professional cultivation of Marijuana was approved on February 21, 2017, by the Dutch lawmakers, which is seen already as a step towards legalisation.

So Sowore’s idea is that Nigeria would flood the international market with our breed of Indian hemp (Marijuana), which those who smoke it have acknowledged as probably one of the best in the world, just like our Brent crude is said to be one of the best too. Imagine that long before this idea of Sowore, entertainers likes of Fela, 9ice, Peter Tosh, Bob Marley et al have in the past spoken of the benefits of Marijuana. Many see it as natural herbs thats very much needed.

If this idea of Igbo can be better articulated, maybe a very large percentage of our youths and others too would be swayed by the idea and could even vote enmasse for the man sponsoring the idea. So if Sowore becomes our President come 2019, hmmmmmmm……

Applications Open for the 2018 TEF Entrepreneurship Forum Travel Fellowship for African Journalists
ALL ROADS LEAD TO IBADAN AND THEN LAGOS AS TAIWO AFOLABI & OMISADE UNITE IN HOLY MATRIMONY. IT WOULD BE ONE OF THE WEDDINGS OF THE SEASON, NO DOUBT.
Comment