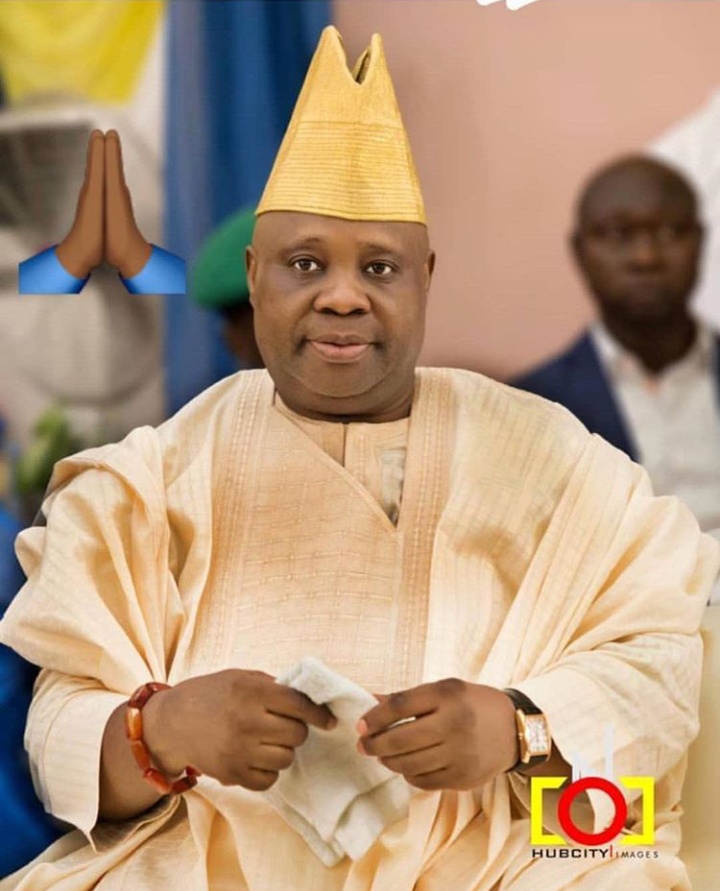 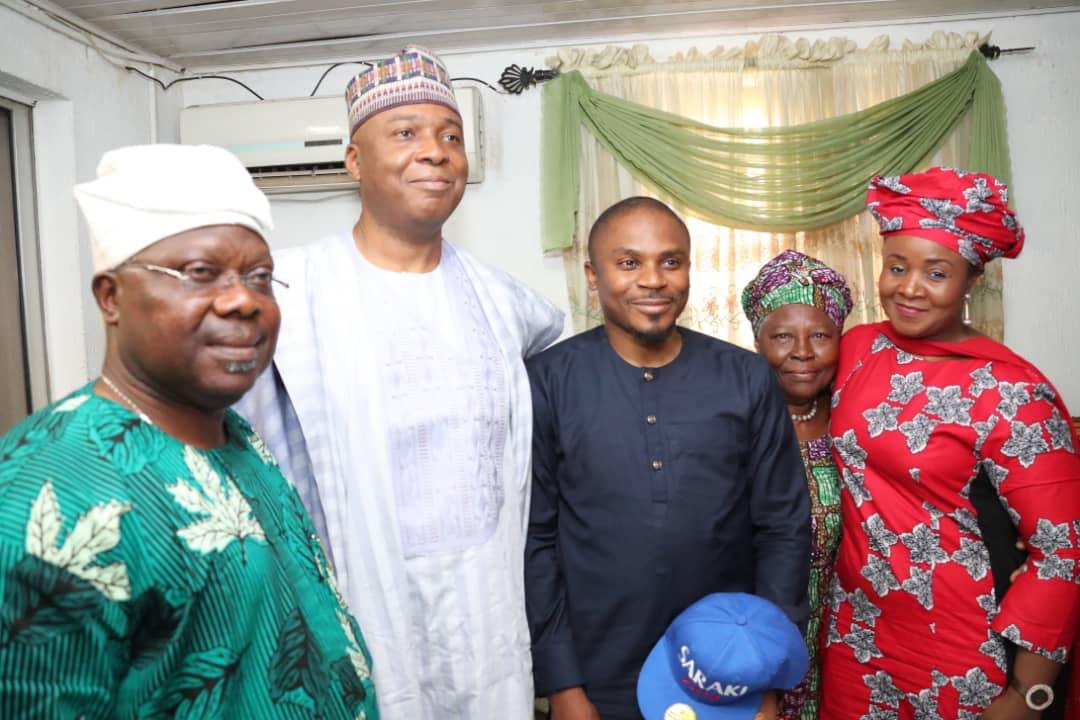 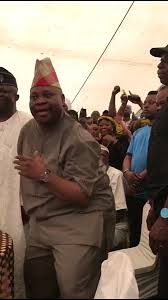 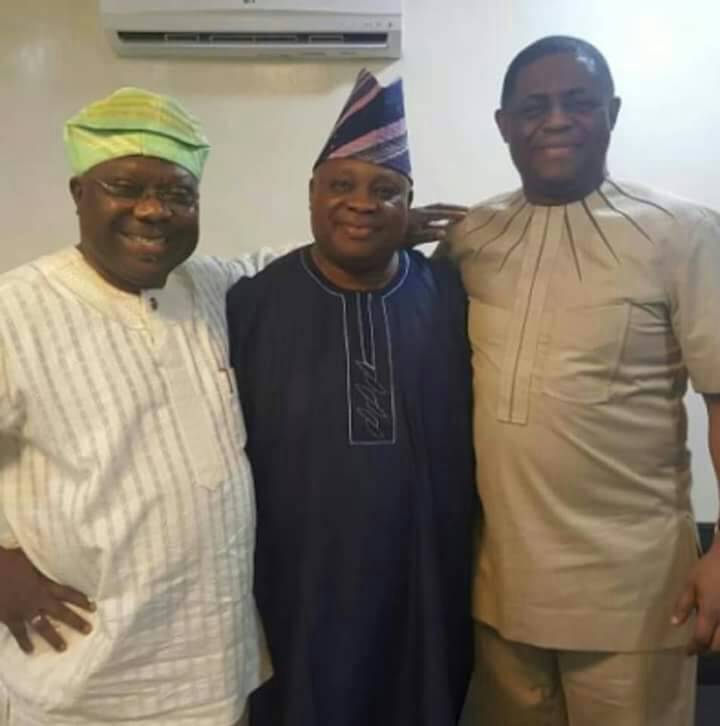 From how things have panned out already it seem those wondrous steps of Senator Ademola Adeleke were not just for fun at all! The way it is now, there is the likelihood that he might have carried the day already! We are also too sure that the APC never expected that it would come to this at all, they would have anticipated a straight forward near landslide victory!!!

Just imagine that as we speak, Nigeria’s happiest man alive-Senator Ademola Adeleke leads by just about 300 plus votes and who says that he wouldn’t win more votes on Thursday, September 27, 2018 at the scheduled re-run election?

The way it is now is that Senator Ademola Adeleke and his party have already won a massive moral battle no matter the outcome of the election at the end of the day!!! Anything short of victory now might just signal a whole lot of hoopla and consequently a rejection of the whole election in its absolute entirety by the PDP & all, as they and their supporters would just shout blue murder to high heavens, even if there was no reason to do so!!!

So Rauf Aregbesola is most definitely on his way out in Osun State, as his tenure is winding up very quickly and his handpicked, preferred candidate Gboyega Isiaka Oyetola “might” have just  lost a gallant battle and might not be replacing him!!!! Fingers crossed

But alas though, all hope is not totally lost at all. With the Osogbo (not the entire Osogbo though) vote still expected on Thursday, Oyetola can still win the majority of the votes there and by that eviscerates that 300 plus lead that Adeleke has for now, but the issue is, Oyetola can never win all of the votes in that Osogbo place. The issue again also is that even if Oyetola now wins after all, which is still very possible, there is that moral issue that would forever bedevil such a win, which can be tagged medicine after death, some would even tag it rigging even if it’s not so. And that’s already very dicey!

Then again, there are those places in Ife, an undoubted enclave of Omisore and Femi Fani-Kayode, both of who are total enemies of the APC and both have already seen & tasted blood (idiomatically though) and so are willing to dig in viciously, going for the jugular. As it is already now, in the aftermath of the inconclusive election as stated or proclaimed by INEC, the opposition are already aligning, banding up together, forming an impressive coalition against a common enemy-the APC and her candidate-Gboyega Isiaka Oyetola.

Adeleke, Omisore and Adeoti, FFK, Saraki etc have aligned, with Omisore especially promising total support for Adeleke’s cause. So all of their supporters are being mobilised to vote enmasse for Senator Ademola Adeleke to complete the job he has already begun over the weekend, so to speak.

So if what is planned actually works out in the long run, then the world should expect a mother of all parties, carnival in Africa afterwards in Osogbo and everywhere too, should Adeleke be fully declared the winner on Thursday. That humongous party would most definitely have champagne popping unabatedly, supported by full scale clinking of glasses all around. People like Alh. Atiku Abubakar, Dr. Abubakar Olubukola Saraki, Ayodele ‘Peter the Rock’ Fayose, Nyesom Wike and the likes would go about celebrating to the highest heaven, claiming in good part, their contributions to the unprecedented victory!!!!

That could actually signpost the most miserable time ever for the APC as a party! And it would have meant also that thunder has striken twice as initiated by same Ademola Adeleke against same Rauf Aregbesola and his anoited ones!!!!

Let’s even move away from the election itself for a moment, to talk a bit about that one, the person that some are already seeing as the incoming Governor of Osun State, in the person of Senator Ademola Nurudeen Adeleke. The fun-loving man is the last born of his mother, Madam Esther Nnena Adeleke for the dad-Chief Raji Ayoola Adeleke who used to be a very prominent person, politician and labour activist in Ede, their homestead. While his father a former Senator under the UPN in the 2nd republic and high chief (Balogun of Ede 1976) was a Moslem, his mom a Christian, who actually owned her own Cherubim and Seraphim Church was Ibo.

So now you can understand majorly where the gift or Ademola’s dancing and singing skills came from. The Cherubim and Seraphim sect are generally known for their love of music and dancing. So Senator Adeleke didn’t just start today.

The late Serubawon, the former 1st executive Governor of Osun State and later a Senator, Isiaka Adetunji Adeleke was the 1st born, he is followed by the quiet billionaire businessman and father of Davido (David Adeleke) in the person of Mr. Adedeji Adeleke, who is/was the main sponsor behind his younger brother’s gubernatorial ambition. It is said that one of the push for this election majorly was because, Deji Adeleke made a vow to himself that he would use his last kobo to dislodge from power those perceived to have had a hand in the untimely and unfortunate death of his lovable and fiercely supported late elder brother, Isiaka Adetunji Adeleke.

After Deji Adeleke is the 2nd daughter in the family by name Dupe. Dupe though is the only daughter from their own mom-Madam Esther Nnena Adeleke, but they have an overall elder sister from another mom. They are though a very closely knit family. Dupe from what we heard could have been the one that the baton had fallen to, to carry on their late brother’s political legacy and goodwill that they as a family had garnered over the years, but being a woman and due to some other factors, it wasn’t to be. And so the baton fell unto Ademola Adeleke, who is the last born. For those who might not have known at all, all through the lifetime of the late Senator Isiaka Adetunji Adeleke, especially his times in Politics, Senator Ademola Adeleke was always with him all through, so the goodwill the happy man got to win the senatorial election then was also because he wasn’t just a novice, not a Johnny just come!

It is said that due to some major reasons, one of which is Adedeji Adeleke’s religious leaning, he by himself would never personally participate in Politics for any reason, but that didn’t or doesn’t translate to that he couldn’t support whomsoever he wishes to or wanted to support at any time.

So with a major reason as the motivating inspiration in the bag to motivate them, with enough money aavailable also to prosecute their ambition, with the massive support from not only Ede alone, but across the state too, it was now the time for debts to be called in, as it is said that Senator Isiaka Adeleke during his lifetime in his political sojourn had supported good candidates across board, not minding their political leanings, so long as they were good people he supported them morally, financially and otherwise. So all of these things might have been the major factors that have worked on his younger brother’s behalf now. But one other major factor too though was that, everyone underestimated him!

Many had thought that the majority of the people wouldn’t even take him serious, but alas now, they have found out rather too late and it might be too too late already. One other major factor that might have counted much also, might be the influence of Senator Ademola Adeleke’s nephew, that is the renowned music ace Davido. In our estimate he actually might have swung a lot of the youth’s vote the way of his uncle. Like we had said before, the over seriousness known in Osun might have been too much for the youths, so with a new option given, they might have though and said why not embrace something new!!!!

All in all, what this has just signposted majorly is that, you cannot neglect the people most of the time and then expect them to support you whenever you just need them! Even if Senator Ademola Adeleke might have carried the mien or semblance of someone not too serious, but that of a fun, happy go lucky fellow, just because he had appealed to the people, he got their votes and that might be carrying him to the seat of power already now! !!

So never underestimate your opponents at anytime and never ever overestimate your own value or ratings for any reason. Like it is said, pride goes before a fall. Can this ‘falling’ (for it is still in motion) actually be remedied or stopped????