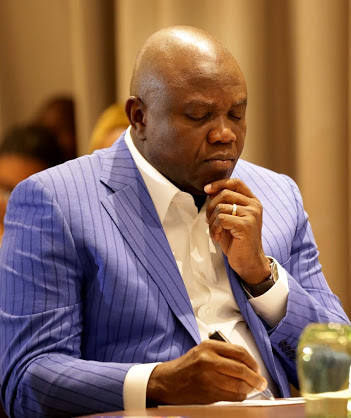 In war like it has been said times without number all is fair and this adage or time honoured saying seem to be what Governor Akinwunmi Ambode has embraced in its entirety in his last ditch effort to salvage what some have called his sinking political career or ship!

In his world press conference held today not too long ago, he employed some of the most dastardly of weapons, likes of character assassination, subtle threat, innuendos etc to denigrate and tear apart his most visible opponent, Babajide Olusola Sanwoolu.

That Babajide Olusola Sanwoolu, is a former criminal/prisoner, in fact ex- convict, one who was once arrested for spending fake dollars in America at a club and was detained for several months!!!!!

That Babajide Olusola Sanwoolu had undergone rehabilitation before at Gbagada General Hospital,…. for what ailment? The Governor has refused to divulge. But he insinuates he has plenty more still in his arsenal to deploy, maybe in the aftermath of the expected loss at the primary tomorrow, which he claims he would still contest.

TIME TO RESPECT THE PEOPLE OF LAGOS STATE AND THE OFFICE OF THE GOVERNOR
AS FAR AS APC IN LAGOS IS CONCERNED, AKINWUNMI AMBODE IS A GONER! IT IS A FAIT ACCOMPLI!!!!
Comment