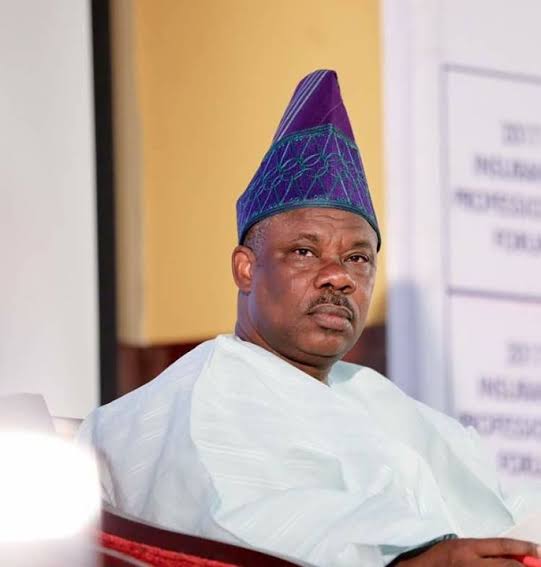 The shortfall of the humiliation that his boy didn’t come out tops as really affected Senator IBIKUNLE AMOSUN the outgoing Governor of Ogun State and because of it, some have claimed he has already dumped his party the APC for another, said to be the Accord Party.

If he were to do that then, it would mean he doesn’t even mind the fact that his avowed friendship with the President would be shaken/disturbed!!!! And that would amount to him throwing all he had worked for and built all of these years to the dogs without a care in the world.

His vehement opposition to his erstwhile friend-Dapo Abiodun’s Governorship ambition is totally unsettling though, making some to even doubt there was ever a genuine friendship at all in the 1st instance. For how can your so called bosom friend want something and needs your support and you are totally and unrepentantly without a care at that against it!!! But according to a school of thought, Senator Ibikunle Amosun’s opposition to Dapo Abiodun’s ambition might have stemmed from the fact that he like most people, like most of us also, wouldn’t want to hand over to someone, that is perceived to be wiser than you and that wouldn’t ever ever be your puppet or stooge, one that you can’t easily control from the apron string. That kind of person that you would push to the position of power and relevance and that must forever be at your beck and call forever. One other supposed reason for the Governor’s opposition also might be because he sees Dapo Abiodun as a paperweight electorally; how can someone who couldn’t win a an election to be a Senator of a few Constitutencies, now wants to prosecute a Gubernatorial ambition which is even on a far bigger scale?

If one would critically and dispassionately look at it and very well too at that, that assertion might just be very true and very right in every sense of it. It would pay the outgoing Governor more, for him to have his anointed on the stool or seat of power that is forever grateful (in gratitude) and that can be molded at anytime, than for a well made, self made at that multimillionaire, many say billionaire, who is absolutely a man of his own.

According to those in the know also, though Dapo Abiodun and Senator Ibikunle Amosun might have been friends, he Dapo Abiodun is more the preferred option/candidate of both the Vice president of Nigeria, Prof. Yemi Osinbajo and that of the National Leader of the ruling party, the APC, in the person of Asiwaju Bola Ahmed Tinubu. So that primary election pick of the APC aspirant, was actually a straight battle between the 2 twin forces of the VP & the national leader versus that of Amosun and his machinery. The outcome at the end of the day wasn’t what the Governor had expected and so the reason for the unending tantrum and threat to leave the party now.

With how things have turned out and is still turning out, the APC might just already be playing into the hands of the opposition (that is PDP & others), and they, would just gladly accept the crumbs for free! It is a fact that’s known by everyone that a house in disarray cannot face an opposition. And that’s because a house divided against itself cannot stand. The old time honoured saying is, “united we stand, divided we fall” apart. So as they fall apart, the opposition would just gladly pick the pieces after them and use to their own advantage.

There is also that school of thought that believes that though Dapo Abiodun might have won this round, that if there’s no reconciliation and he doesn’t finally get the backing of the outgoing Governor and his machinery, that it might be very hard for him to eventually carry the day and become the Governor of Ogun state, which is actually the ultimate dream or goal.

For now, those in the know says that though there is the threat of ship jumping from the Governor and his team, but can he actually as a matter of fact jump? The dilemma there now is that, what if he leaves and at the end of it all, all things now work out well and good for Dapo Abiodun and he wins, wouldn’t that have been a nail on the coffin of Amosun’s political career and adventure?

Some are even claiming that an audacious move could still happen one way or the other, where Dapo Abiodun can be coerced to step down and be replaced, so that the Governor’s bruised ego can at least be somewhat assuaged, but would the oil and gas billionaire accept such an arrangement, especially with the kind of backing he is perceived to have already supporting him?

The dilemma is very much and the political intrigues also just too awesome. So we as fun spectators on the sidelines, have already bought sack loads of popcorn, with enough cold Zobo drinks in the cooler as we adjust our seats to sit well, so as to see how things would eventually pan out.

So would there still be salvation for Amosun? Hmmmmmmm, Let’s wait and see! If not, let’s see how things would pan out for him as he moves over to the Accord as speculated!!!! Dapo Abiodun in the last one year has suffered so much, especially with the loss of a star son to untimely death, so while still grappling with such a loss and still trying to accept what has happened as an act of God and bring a semblance of peace to his life, to now be ‘betrayed’ by a supposed friend must have also hit him hard too.

So we presuppose that he might not and would not want to entertain any unnecessary negotiations that would make him to be at the receiving end of any decision(s). So for him to drop the flag, may just be a no no.

WHERE DEM BOYS AT? SEEMS LIKE ALL THOSE SPENDERS HAVE GONE UNDER THE RADAR NOW!!!!
DR. IBE KACHUKWU POOH-POOH’S ALLEGATION OF FALSIFICATION OF CERTIFICATES
Comment