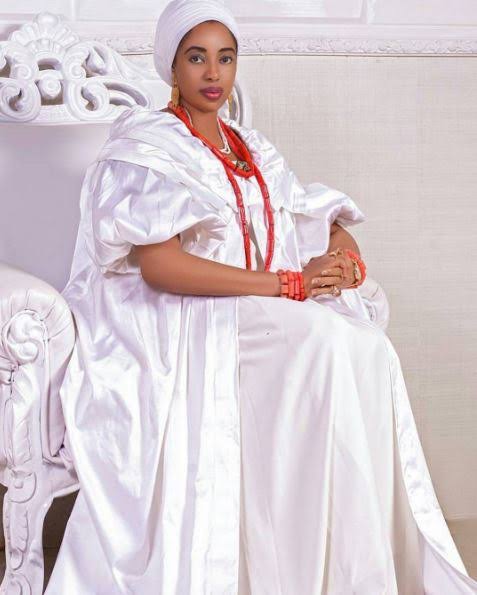 Former Olori of IFE, who still carries the title of Queen and the tag Her Highness, that’s Wuraola (Precious Gold or Gem) Zaynab Otiti has shown how large her heart is and the nobility that she’s filled with in glorious abundance, as she congratulated her ex-husband, His Imperial Majesty, the Oonirisa Adimula of Ile-Ife, Oba Adeyeye Enitan Babatunde Ogunwusi, the Ojaja II on the occasion of his new marriage to his much younger new wife, Yeyeluwa of IFE, Olori Shilekunola Naomi Moronke Ogunwusi.

Maybe just to show there was no hard feelings no more, even if she felt shortchanged somewhat. The globe-trotting former Queen went lyrical in her power packed message of  forgiveness and congratulations saying—

“It was once said there is
nobility in compassion,
Beauty in empathy, and
Grace in forgiveness. Congratulations to the Ooni
& his new bride,
Shilekunola Naomi
Moronke Oluwaseyi. May
God bless your union”.

The Ooni and his 2nd wife, the former Olori Zaynab only enjoyed marital bliss for just a few months after their very celebrated marriage, before the center couldn’t hold no more and the madam abruptly announced that they both were parting ways.

There were many speculations then as to why the marriage might have broken down irretrievably, but both parties, that is the Palace and the ex-Queen herself, who is very social media savvy never confirmed why they had to part ways. But from the terse message she had sent out to announce their break up then, it was very obvious that there was repressed animosity. Although much later after the deed had been done and naysayers had gone ballistic or should we correctly say bombastic as to why things went sour, Queen Zaynab had at a time come out to stress that it was never infidelity on her part, that had caused the marriage breakdown. That, that particular tales by moonlight, was the handiwork of naysayers who had thought to spread falsehood. In her defence, she only stylishly hinted that she was going to continue on her humanitarian course and continue to fight for women, aiding those suffering from domestic violence and abuse.

With this message coming out now in the public, it is obvious now that time, might healed the hurt in her heart and therefore, ‘Madam Zaynab Otiti Obanor’ has come to accept the situation of things and therefore has let go and allowed bygones to be bygones and she has literally moved on with her life!!!

So we commend her for her magnanimity of heart and we also pray that God would chart her own path too for her and lead her to her own very happy place too.

LIKE KEMI ADEOSUN LIKE RAZAK ATUNWA. THE UNRAVELLING OF A FORGED/FAKE NYSC CERTIFICATE
CHECK OUT ALL THE WINNERS AND THE RAZZMATAZZ OF THE AMAA 2018 AS IT HELD IN KIGALI, RWANDA
Comment