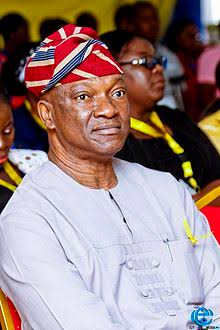 Seems like JK and his party the PDP have gone to sleep again in Lagos. It’s like after the initial GRA-GRA of a few weeks back, they have receded back into their cocoon again to awaken maybe much later nearer the election.

Except maybe their action for now is deliberate and they have intentionally adopted this clandestine style just to deceive their opponent, the APC to think they see inactive and then spring a surprise. Adopting or better still employing deliberate misdirection and subterfuge, maybe then we would have understood this their glaring inactivity.

Just Imagine that it’s only a few months to the next Gubernatorial election which would decide or determine who should or would take over from Governor Akinwunmi Ambode and up till this very moment, while the APC’S aspirant-Babajide Olusola-Sanwoolu is very visible, meeting with stakeholders, connecting with the people across board on different fora, engaging, discussing and generally creating awareness, instead his most visible opponent, Jimi Agbaje aka JK of the PDP is nowhere to be found!

Like we already said, except maybe there is a winning formula that they are perfectimg or that they have perfected and that they do not want to easily and quickly divulge, of otherwise they lose like it is starring them in the face now, then they have themselves to blame and should not cry any blue murder!!!

Just Imagine that Sanwoolu is not resting on his oars believing that the winning party machinery led by Asiwaju Bola Ahmed Tinubu and others are behind him, let him just go and rest and then coast home to victory. But he is busy every week going about doing the needful. Politics first and foremost is about engagement, connecting with both the stakeholders and the electorates, showing the ability to mix and showing the trait of humility and having a listening ear. We are already seeing much of Sanwoolu, but only know that there’s a JK somewhere in background eyeing the same seat too.

Like some have said though, it’s still very early days yet. There’s still enough time to do the correct things that would excite the polity and get their attention. If Sanwoolu likes, he should criss-cross the whole of Lagos ten thousand times and meet with all those he wants to meet with, all of that doesn’t count so says some. We know what to do, when the right times come.