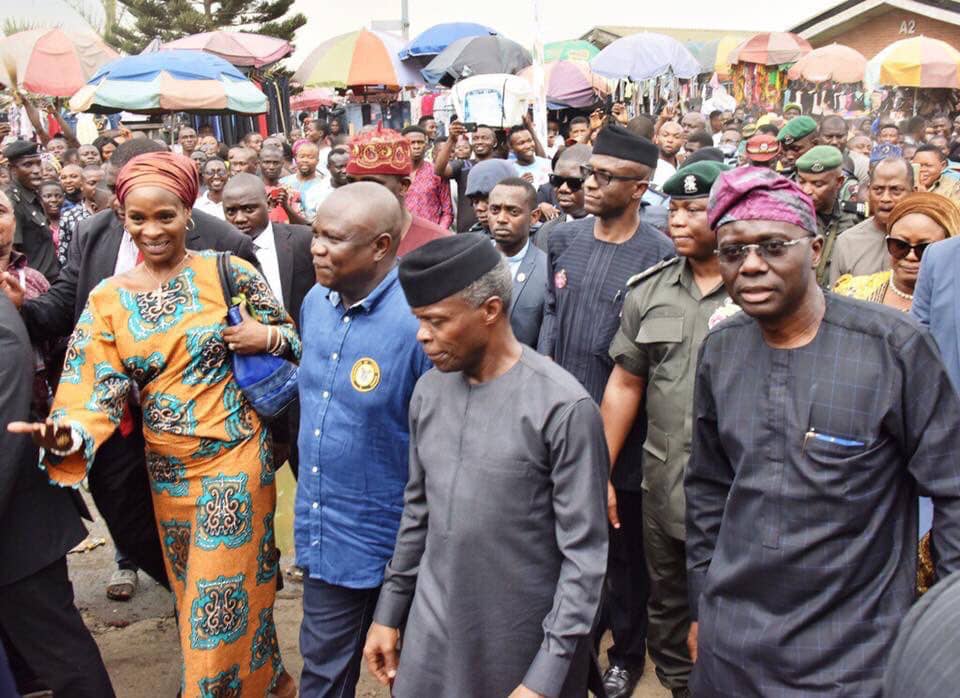 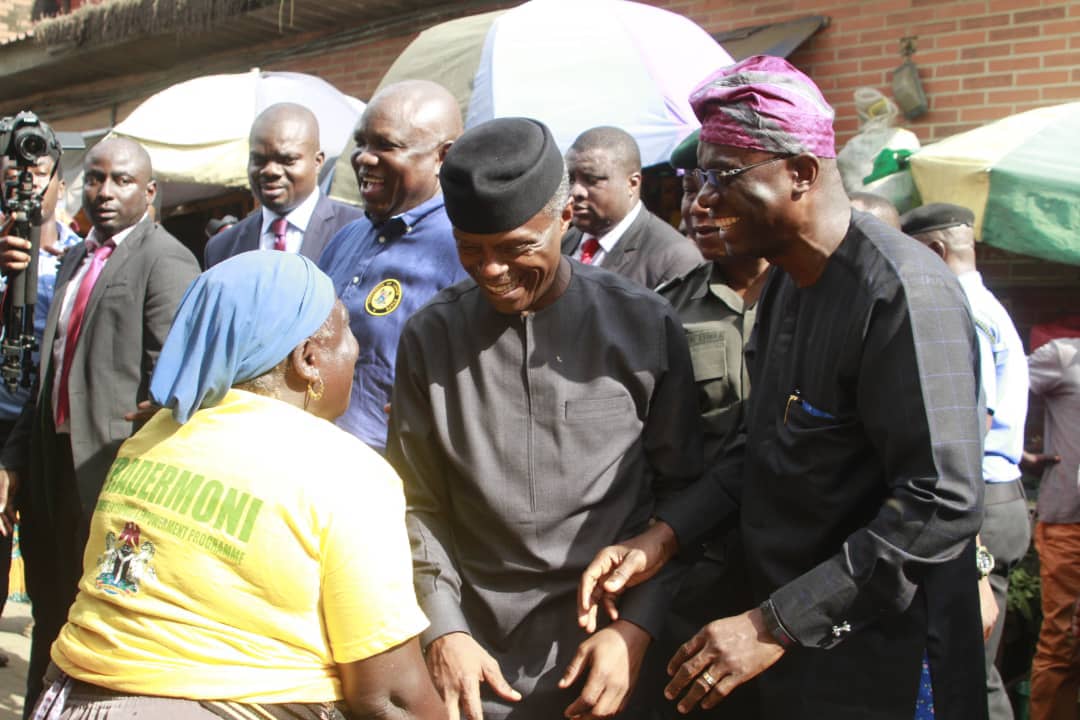 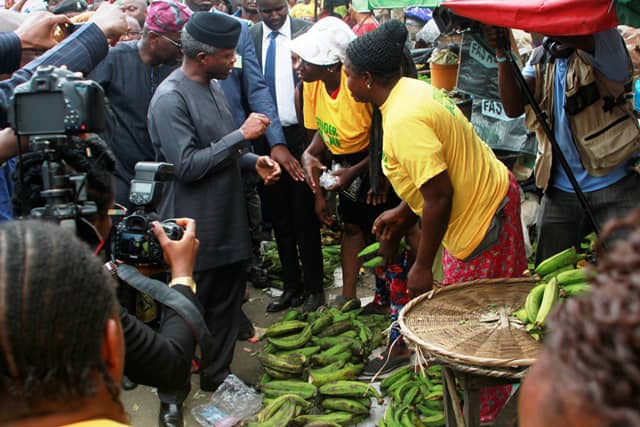 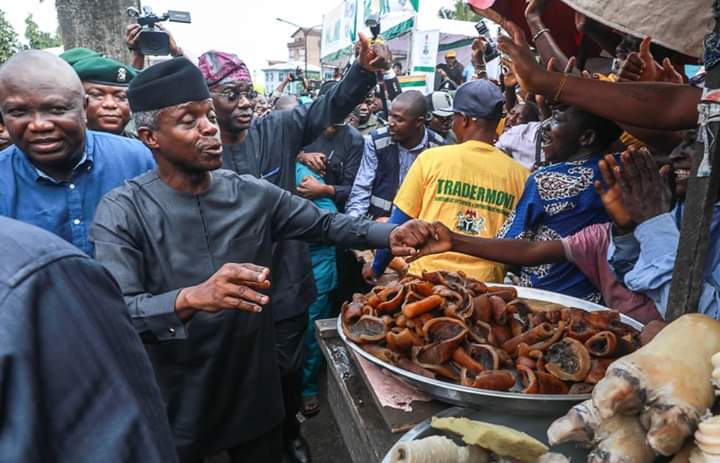 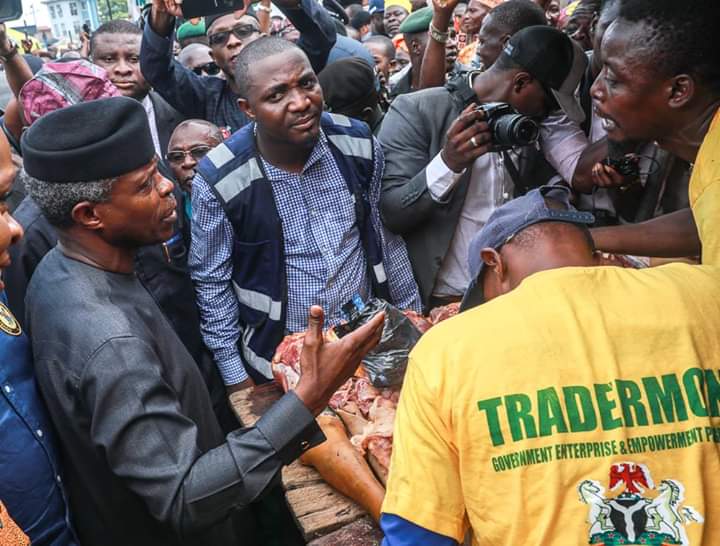 It was an ecstatic moment mid afternoon 2 days ago as the Vice President of the nation, Prof. Yemi Osibajo unveiled the Federal Government’s Trader-Moni initiative, a Government enterprise and empowerment programme to petty traders at the Ketu and Adebayo markets in Lagos.

The Vice President who was accompanied by the Lagos state Governor, Mr. Akinwunmi Ambode and the All Progressive Congress’ (APC) Lagos State governorship candidate for the 2019 election, Babajide Sanwo-Olu, toured the markets to the delight of all and interacted with the market men and women assuring them that the government will increase the loan to each individual provided they use what they have gotten  judiciously and are also faithful in paying back the sum as at when due.

Reacting to the Government’s gesture at the Ketu Market, the Babaloja Ikosi, Ikosi-Ketu market, Chief Akanbi Taofeek said by remembering the petty traders, the Federal government have taken the right step in the right direction. He went further to say that  although, the amount involved is small, the Babaloja said it would still go a long way to ease the suffering of the down trodden Nigerians and traders who are very much in need of such interventions. The Babaloja assured the Government of good support to ensure that the recipients keeps to what he calls “very encouraging repayments terms”.

Speaking in the same vein, the Iyaloja of the Ketu market, Mrs. Amope Adesanya, urged the Government to sustain the tempo with which they have come out to unveil the loan assistance to the common traders without the usual insurmountable requirements by Microfinance Banks and similar organizations.  Hence the desire of the market associations to support the government to ensure that the money goes round to the traders.

Some of beneficiaries who spoke on their experiences included – Ismaila Orilowo and Sunday Adekunle, both Meat Sellers at the market. While Orilowo noted that the initial loan sum of N10,000 may have been too small for his kind of business, but he still praised the Government for at least starting something.  “If such initiative had been on, all the while, a lot of economic burdens will have been eased for the common Nigerians”  Orilowo who is a cluster leader in the meat section of the market confirmed that at least a dozen traders in his team have received the money.

Elfreda Asuquo-Edet, a vegetable  trader who revealed that she had declined to register with the Trader–moni officials on their first visit to the market because she had thought it was another scam, she however expressed joy that she has benefited and invested the sum in improving her trade.  “I like the condition because it’s not going to stress me at all”, she said.

Another beneficiary, Blessing Augustine said, I am happy the Government at long last has thought about the masses. The money will help in my trade and the way it is structured, it will encourage beneficiaries to pay back on time so that they will qualify for the next step of bigger sum”.

AT THE ADEBAYO MARKET
The VP and his entourage made up of the Lagos state Governor, Akinwumi Ambode and the APC Lagos state governorship aspirant for the 2019 general election, Babajide Sanwo-Olu also visited other markets too.

Speaking also about the project, the Babaloja of Adebayo Market and Bariga LCDA, Alhaji Rasaq Rabiu said the presidency made a thoughtful decision in remembering the traders and giving them the financial support which will boost their businesses.

According to him, “we thank God; the Vice President came here because of the money they are giving to the traders’, money to maintain their markets so they can make profit. Those who collected this money will not curse the Government rather they will praise them. We will continue to pray for the  Government to continue and do more than this”.

Mr Rasaq added that the traders have been sensitized that the money is a loan which they must return within six months which will enable them to acquire the next phase.

A catfish seller, Miss Adeola Oyekanmi who got her money within three days of registering for the project couldn’t hide her feelings as she hailed the Government for considering them in the project. “We started hearing about it since Friday that we should come and register and after registering we got a message and the next was a credit transfer alert. I got the money today. The money will improve my market, I am selling fish and I have N50,000 , if I add the N10,000 to it, it will boost my market, It will help me a lot, she said.

Also, a stock fish seller, Mrs Unwachukwu Ebere said she was happy on hearing about the money though she did not know it is a loan. “ I have collected my money. The money will boost my business. I am doing business with 5,000, if I add the 10,000 to it, it will surely help me.

The Iyaloja of Adebayo Market, Bariga who was also a beneficiary of the Trader-Moni initiative said the money is a good way of encouraging the traders and it will help them. According to her “The loan is good. Giving N10,000 is better than nothing.  She added that the interest rate is very small which should not be the problem for people who have collected it.

A trader, Mrs Ogunmayi who specializes in selling shoes and bags said though the money is good for petty traders, but she thinks the Government should come up with projects that will benefit those in her category.

Speaking to the press on the project, a representative of GDM, a consulting company for the Trader-Moni initiative, Mr. Olarenwaju said the information and intergration of the people towards the project has been on for almost three months. He said people were skeptical about it at first, after telling them because they are not seeing the money immediately then. He is however delighted that the people were not disappointed.

The Trader-Moni initiative is supported by the Bank of Industry and the loan repayments can be done at any of the major banks likes of Union Bank, Jaiz Bank, Fidelity Bank, GTBank, Sterling Bank, UBA, Heritage Bank, Wema Bank, Ecobank and Stanbic Bank.