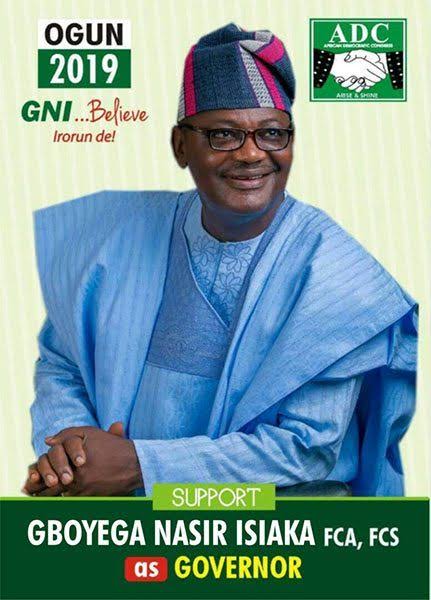 Still basking the euphoria of his win in the Senatorial election of last week, the outgoing Governor of Ogun State, his excellency Senator Ibikunle Amosun might have gotten more bold now, to want to see to a logical end/conclusion, his experiment at getting his preferred candidate, Hon. Adekunle AKINLADE to win the next Gubernatorial election in Ogun State, so that he could succeed him.

The stress of fighting on 2 fronts at the same time is no more now, especially since he has now won his own battle, so it’s now one down and the major one to go. But from all indications the battle is going to be fierce and not easy at all, especially with the Governor’s candidate, Hon. Adekunle AKINLADE being a member of another party, APM that is Allied People’s Movement. & not supported by the APC at all.

What this intractable division in the ruling party has done to their chance of winning the next Gubernatorial election come March of 2019, is to open them to a seeming defeat and embarrassment and that’s because, “a house divided against itself, cannot stand”, not to talk of winning an election, especially a close one like this one would be.

What has been a seeming loss for the APC and its candidate in the person of oil and gas multimillionaire Otunba Dapo Abiodun, might have become a great gain for the candidate of the ADC (African Democratic Congress), in the person of Prince Gboyega Nasir Isiaka, GNI for short. And it’s not even only in the APC that they haven’t been able to close ranks, even the PDP that should have become the strong opposition are even far worse off, with opposing factions claiming to represent party at the election. If they cannot fight the upcoming battle as one, how can they ever win the war!

To say the least, a lot of great advantages have swung the way of the candidate of the African Democratic Congress, in the amiable gentleman known to all as Prince Gboyega Nasir Isiaka.

A few of the reasons why many have already concluded that he might just be the next executive Governor of Ogun State are as follows. One, GNI even without the troubles bedeviling the 2 major Parties in the state – that is the APC & PDP in Ogun State, was already a force to reckon with in the politics of Ogun State in last decade. He was in the government of Otunba Gbenga Daniel before and he even vied at a point to represent the same PDP as the Gubernatorial candidate of the party at one point, but he wasn’t favored hence he resigned from their party. Two, because of the troubles that has bedeviled those 2 parties and which has whittled down their support base, infact dividing it considerably, GNI has since become a bridge and is even considered as a fantastic alternative to the 2. And the loss of support base has been to the good of their arbiter-GNI. Three, GNI himself is well embedded in the politics of Ogun State and infact has immense grassroots support, coupled with the support of the state’s elite too. Fourth, the area, Yewa, that GNI actually represents or is actually from, is seen by all to have been marginalized all of this while, so it is somewhat accepted by all, that it is their turn, for someone from that end, to climb up and become the next Governor of the State. So that things would be seen to be fair to all parts of the state. From when the state was established, no person of Yewa extraction, none at all has ever ruled or governed the state before, while the Egbas & Ijebus have on several occasions. Fifth, of all the candidates that are aspiring to become the Governor of the state, none is better qualified in any ramifications than GNI is. Infact his pedigree, that is without any controversy whatsoever speaks for him. And he also has good public and private sectors experience to add to it all. Sixth, from all indications, especially after going through his manifesto, it is quite obvious that he seems to have the best ideas/plans about what he wants to do/achieve for the state

So are we expecting that change of baton, come March 2019 from the APC to another party???? A very pregnant question, it seems! Let’s just wait and see how things would pan out. But all pointers, seemingly points to an upset of stratospheric proportion upcoming.