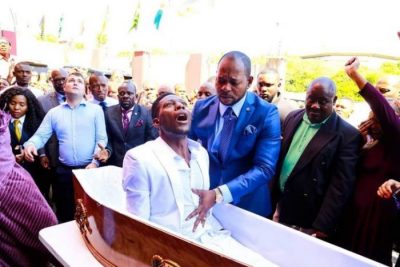 Just like he had hoped for, the silly man, who calls himself a pastor, a man of God, got the notoriety he had desperately wanted, when to the astonishment and shock of all he faked a resurrection from the dead. In the video that had gone viral and that some very gullible people actually fell for, the South African pastor by name Alph Lukau of Alleluia Ministries in the glare of all, claimed to have woken up a dead young man who was in a coffin, with his mouth agape.

It was seen from the video how members of his church, made up of a large crowd were totally mesmerized by the supposed miracle and the news went far and wide and because of that, the act itself came under massive scrutiny and investigation.

Firstly, when one looks at the video very well, you would have noticed movement from the supposed dead, prior to being miraculously raised by the fake pastor.

So with his fake resurrection miracle not been able to stand scrutiny and after he was sued by those he had foolishly tried to conscript into the fake act without their knowledge, the very foolish man has come out to confess and apologize for the grand deception.

Hear him- “he regrets the incident as the man was already alive when he arrived at the church.

Speaking to a Gauteng broadcaster Power FM’s Power Drive host Thabiso Tema on Wednesday evening, Lukau said he was busy with a sermon on Sunday when he was interrupted and told that a person in a coffin had been brought to the church.

“Before entering the premises of the church, the coffin began to shake, meaning the person was alive,” Lukau explained. “I am really sorry for the misrepresentation of facts, the man was not dead and has never been in the mortuary as we earlier said”,

Lukau said the man was brought to the church by his family, who believed that something would happen if he was prayed for.

He added that further questions about why the man was brought to the church would be better answered by the man’s family.

“I think that they brought the person to church because they believed that God had the ability to resurrect the person. but still our brother was alive even before he was brought to church and we really apologize for not telling the truth in the first place,” Lukau said

From the above, it is still very obvious that the fake man of God is still not telling the whole truth! But even at that, since he has confessed to being a part of a fake miracle in the 1st instance, what would now happen to him, his church and even the acting dead man, all of who are co-conspirators in this buffoonery or better still arrant mischief? It is very obvious that he couldn’t have acted alone in the whole matter. Would he be allowed to go on deceiving the people? For him to have gone on this scale or level, what would he do next? Could this terrible one have been his 1st time? There are loads of questions that needs answers! !