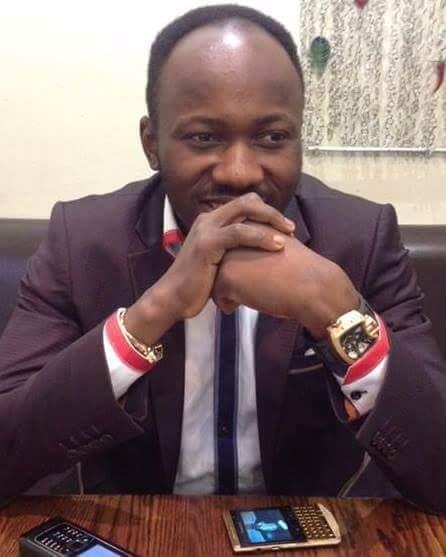 Controversial man of God, who was in fact one of the major advocates against the return of PMB as the President of Nigeria for a 2nd term, in the person of Apostle Johnson Suleiman of Omega Fire Ministries has in the aftermath of the loss by PDP’s Alhaji Atiku Abubakar in the Saturday, February 23, 2019 Presidential election has come out to advise the gallant loser to forget about going to court, but should rather go home for the sake of peace in Nigeria.

In the election where the incumbent polled 15 million plus votes as against 11 million plus votes for Atiku of the PDP, where also PMB won in 19 states and got at least 25% or more in the other states, against Atiku who won in 17 states plus FCT Abuja, with a margin of victory close to 4 million, 3,928,869 to be more precise. The win by PMB totally destroyed the predictions, prophecies and expectations of many of the men of God, who had either sad he would die before the election would happen or might even fail at the election, if he should run, Apostle Suleiman inclusive who had declared doom and defeat in their expectations for PMB.

Now that the Presidential election has been done with and the winner declared, the Apostle has come out to say that instead of the loser, that is Alhaji Atiku Abubakar going to court to try to claim his perceived victory, that he should just go home.

“Politics is a game. If you lose go home. Don’t go to court. Go home. It’s not your father’s property. If you don’t win today, you may tomorrow.”

We would be reviewing some of the Apostle’s predictions after the Nigerian elections have ended. Of particular interest is one where he had said “I saw most eastern states won by the APC at the national level”.