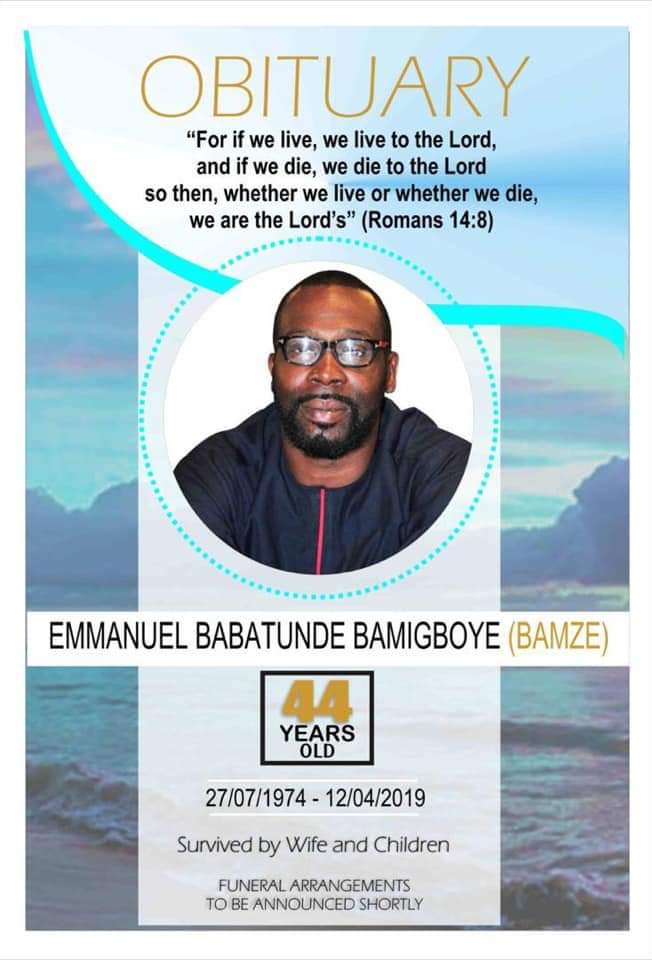 What can we say? Fact is, we are actually lost for words and that’s just the truth. We have tried to rationalize it, that maybe it was for the best, but how can the untimely death of a 44 year old, seemingly healthy man be easily explained & be for the best? How does one go to his family to say sorry? What kind of sorry is that? That nuisance called death just did her worst again, leaving tears and anguish in her wake. What a shame!!!!

Bamze is gone leaving his beautiful and very loving wife Tosin and her 2 wonderful kids behind only to hold on to memories of the great and wonderful times in past. Now all their hopes are seated on God strictly, as the man of the house is gone forever, at least till the day of his resurrection.

What a sad loss!!! But why Bamze? Why did you yield so easily? You could have at least fought much harder, if not for anything at least for the sake of the many many that loved you. You looked strong so strong like the Iroko or oak tree while alive. Your height of 6 ft plus and your booming voice could be intimidating, but you were a gentle giant of a man.. But alas, you giant yielded and some would claim that it was peacefully in your sleep, due to cardiac arrest! What a loss!!!

Our paths crossed several years ago at the University of Ilorin, Kwara State. You were the tall, handsome, cool dude who was always very well put together and was always good fun to have around. Knew your brother Victor long before we met. Had heard about your brother Femi Mora, who was a known stylish dude of that time, so when you came one had expectations and you didn’t disappoint at all. I remember jamming you again by chance in London at that restaurant where I had gone to pick up my abula (amala and ewedu plus gbegiri), you were still yourself even as prior to that time I hadn’t seen you for a very long time, since we left Ilorin and you relocated to London.

Emmanuel Babatunde Bamigboye adieu. It was only just late last year that your dad, who was the 1st military Governor of Kwara State, Retired General Theophilus Bamigboye passed on. Now after just 5 months or so that he was buried, you too has gone on that journey of no return. You would be sorely missed oooooo. Your kids Zabethy & Bolatide would miss you loads.

Bamze’s remains would be buried in the next few weeks in London as soon as his family agree on a reasonable date. We would just want to use this opportunity and medium to commiserate with his entire family members, friends and colleagues. May the soul of the dearly departed find rest. And may God give all and sundry, the strength and fortitude to bear this untimely loss.

Salute Bamze!!
Till we meet again on the day of your resurrection.