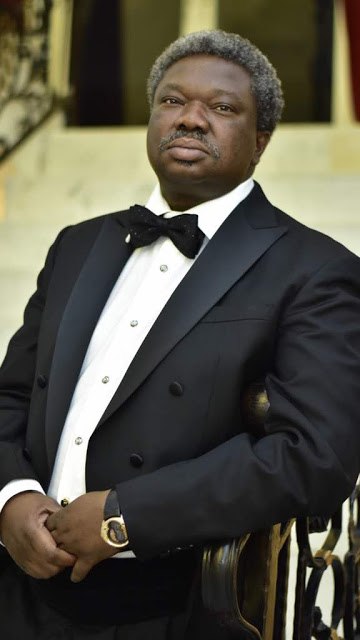 Sir Olu Okeowo is a man of outstanding taste and distinction and that shows in everything he does, be it the houses he builds, his own personal home and the cars he really rides. The huge man of means, known more for his collection of mind blowing cars and humonguous home, better known to all as the ‘Palacios de Okeowo’, reputed to be the biggest, most intimidating and most interesting home in the whole of Ikoyi. Which in Nigeria, is known as the enclave of the super rich.

The palatial edifice that would in fact leave most mouth of the super rich wide open in bewilderness is built on several hectares about 5 hectares of prime land and it over looks the sea or is it the lagoon at the back. View is better experienced than spoke about. We have been to the house, the building, the palatial home or describe it however you want to, a couple of times now and all that we can readily say or that we can sincerely say from our spirit is that, the owner of the property, intentionally built it the way it is, to intimidate, to announce and show it off to all, it’s like saying out very loudly- “I am a man of means all others must take notice of”.

The inside of the home is as ostentatious, grossly ostentatious as you can describe. The decor and things inside can only be described as vulgar to the limit. That huge and ornamental dining table is vulgar. The grand piano like those in the church with all the pipes is vulgar. It is just what some people would readily describe as “loud for a purpose”.

Just imagine that as you enter into the massive compound and just immediately to your left, what gets your attention is the showroom of humongous machines or should we say breathtaking cars.

At least not less than 5 intimidating signature or custom built Rolls Royce of several hues and colours and designs are in that deliberately intimidating garage, that would build several homes for many thousands to live in. Then also apart from the many double-toned Rolls Royces which couldn’t have cost less than $1.8m dollars, are about 2 or 3 awesomely outstanding Bentleys, one of which is the Bentley Mulsane extended wheel base of about $400,000, which has just only 50 of it ever built in the world, meaning it’s a limited edition series and the 13th of which Okeowo, the name that loosely translates to mean “custodian of wealth” used to celebrate his birthday about 2 years ago, when he clocked 40 something, though it was later claimed to be 52 (we believe them).

Still talking about that garage you still have there the G-Wagon, the Range Rover, the Cadillac Escalade. And then there are several other normal cars that litters the compound too. All of these cars couldn’t have cost the property czar less than between & 2.5 to & 3m dollars, in today’s estimate that would be pushing between N900million to N1.08billion on cars alone.

The amount above, whichever you choose between N900 & N1.08billion is already so huge, but the man of means is not still relenting at all neither satisfied and we hear that for his upcoming birthday he has already ordered for another badass Rolls Royce which is costing him between N300 to N400million as he is set to pay a whopping N40million Naira as duty which for the dude is a major dilemma.

From what we have deduced, though both men of means have never said anything like there’s a competition between them, it seems like there’s a quiet competition between Nigeria’s ultimate Mr. Rolls Royce, Dr. Boluwasanmi Akin-Olugbade, who is the Aare Ona kankanfo of Owu Kingdom, in Egba, who is probably the nos 1 collector of Rolls Royce cars in Nigeria and the property tycoon/owner of Gibraltar Construction, Sir Olu Okeowo. Either there’s a healthy competition of a sort or that Sir Okeowo has just fashioned himself after the Aare of Owu, who is on his 10th Rolls Royce as at the last count in January of 2019. Sir Okeowo is on his 5th or 6th and if the new one comes in eventually for the birthday, then it’s going to be his 6th or 7th then.

THE WOW BABY MAMA OF THE NEW HELMSMAN
WHO IS THIS FEMALE NIGERIAN PRAYER WARRIOR, WHOSE ADHERENTS HAVE TO SUCK HER BREASTS FOR BLESSINGS
Comment