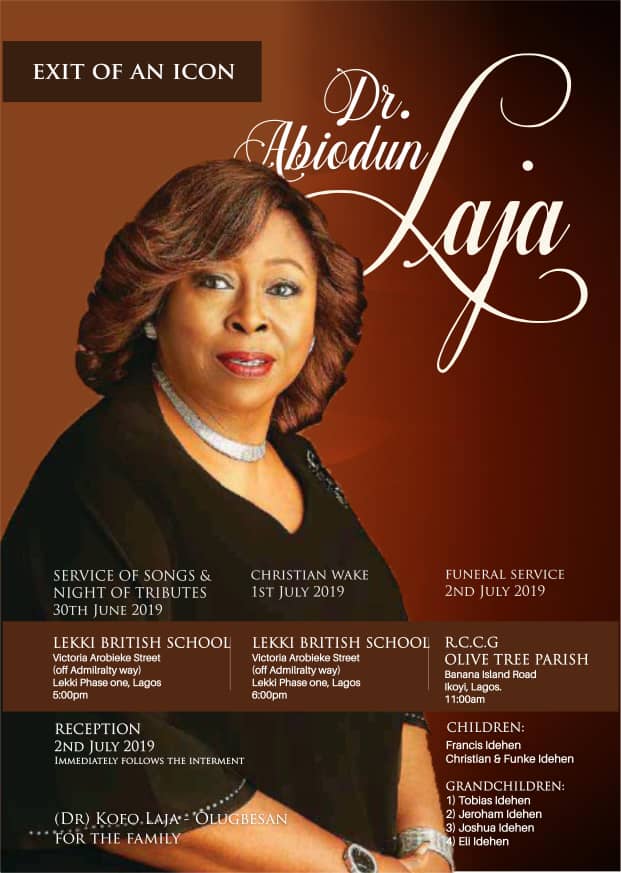 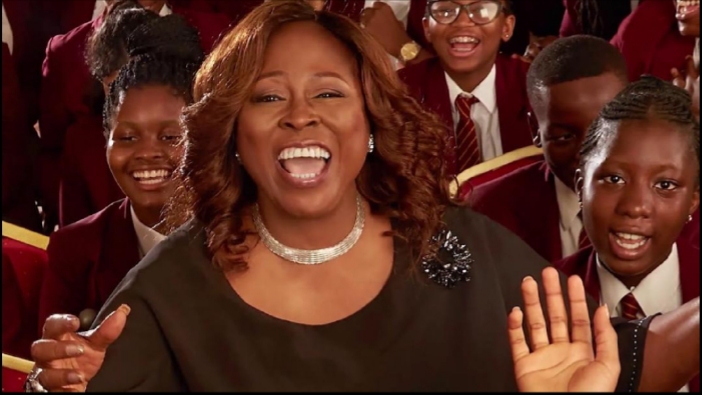 The entire family and friends of the great educationist, the administrator par excellence, the visioner and founder of the Lekki British School, Lekki, Lagos who passed on unfortunately very recently after an operation abroad at the age of 69 years are still reeling from that shock demise even many weeks after the sad occurrence.

Dr Laja had undergone what was considered a routine and very successful surgery operation on her ailing back and was gradually recovering from the operation, only for her to give up the ghost exactly 3 days afterwards due to complications from a suspected cardiac arrest. The unfortunate incident occurred in the United States at a high brow hospital on Sunday, May 26, 2019. The back had been problematic for her and at a point had started affecting her walk. So she was operated on, on Friday, March 24, 2019 and had even gone back to her hotel to recover and was said to have even being in contact with family and friends, only for there to be some complications and she was rushed back to the hospital, where she thereafter gave up the ghost!

The late great educationist is the younger sister of Chief Dr. Mrs. Kofo Olugbesan and she is the elder sister of the very influential former commissioner in Lagos State Government and now a top chieftain of the ruling APC, Chief Mrs. Kemi Nelson. Aunty Kemi like most call her, is presently the ED of Operations, NSITF and the South-West Woman leader in the APC. The late founder of the now ABC Nurseryland, Floral College and Lekki British School would be buried next week in Lagos. Her funeral program is below.
Service of songs and Night of tributes is set for Sunday, June 30, 2019 by 5pm, inside the compound of the school she founded, Lekki British School, on Victoria Arobieke, Lekki Phase 1, then the Monday after at the same venue by 6pm is the Christian wake keep, then on Tuesday July 2, 2019 is the funeral service and interment. The church service would be at RCCG Olive Tree Parish, Banana Island Road, Ikoyi, Lagos. Reception follows immediately after the interment.
Dr. (Ms.) Abiodun Laja is survived by her sisters, 2 sons, grandchildren and many others. She was born January 7,1950 and would have clicked 70 early next year. Which many were eagerly  looking forward.
May the dear soul of the well loved departed find rest.
TagsBack Problem Cardiac Arrest Chief Mrs. Kemi Nelson Dr Ms. Abiodun Laja INTERMENT Kofo Olugbesan Lekki British School MAESTRO's MEDIA OPERATION RCCG Olive Tree Branch SOCIETY AND LIFESTYLE

THE ACCUSATIONS OF RAPE AGAINST PASTOR BIODUN. WHAT DOES ONE DO IN SUCH A SITUATION?
CHIOMA (GOOD HAIR) IKOKWU’S MYKONOS GETAWAY ALL FUN 30TH 🎂 BIRTHDAY PARTY.
Comment