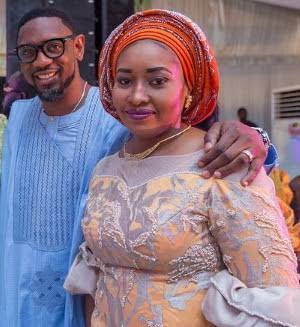 It wasn’t a surprise at all earlier today when at their (COZA) HQ in Abuja, amidst the turmoil of the protest going on outside, Pastor Biodun Fatoyinbo’s wife, showed and displayed her full support for her husband of many years.

At the very brief service today, Sunday, June 30, 2019 where the couple had to make a show of their support for each other, Mrs. Omodele Fatoyinbo as expected, stood on the pulpit next to her husband, before their teeming congregation and made a short address let’s quote her verbatim–“My husband is not a rapist. Even if he was not a believer, he would not be a rapist”.

But before she could go on to make further statement on the trending issue that has hit their home and church terribly, her husband quickly took the microphone from her, maybe as a way to dismiss his present predicament as a none issue and mouthed–“the elders are handling the matter”. And that was it.

The shock of the Busola Dakolo revelation has shaken the table in such a way and manner have not thought possible in a long while. In her statement of allegations, she said while he was a pastor, not yet of COZA then in Ilorin, Kwara State, Pastor Biodun Fatoyinbo came to her house and raped her, thereby disvirgined her and a few days after wards again, did it again. This rape happened when she was just 17 year old. Still a minor according to the Nigerian constitution.

The only statement of denial from Pastor Biodun Fatoyinbo has been a press release from the church, where he denied the rape ever ever occurred and then went further to insinuate blackmail. Who are those trying to blackmail him or his church he never stated. But he threatened that a lawsuit would follow the accusations.

Today as promised by so many, a protest at all the branches of COZA actually took place rather successfully and what we saw, as we were at the branch near the Sheraton hotel to observe what would happen was quiet unbelievable. We would make a report of that on another article.

BUSOLA DAKOLO-THE NEW VOICE/TRUMPET OF A GENERATION
BUSOLA DAKOLO AND THE BATTLE AHEAD. SHE WOULD NEED PRAYERS AND MAJOR SUPPORT.
Comment