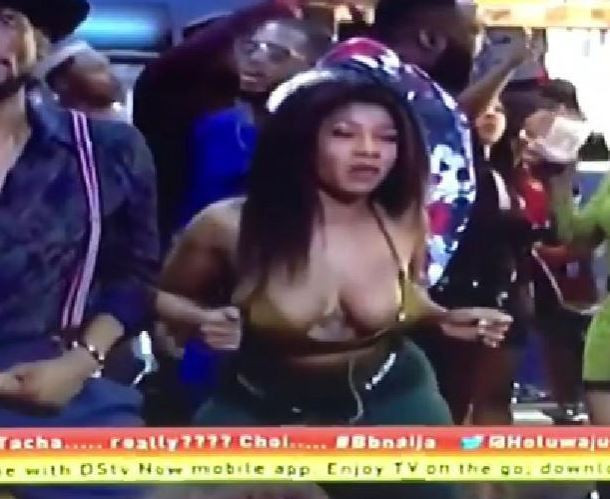 It was obvious that one way or the other that a mishap was going to happen last night in the BBNaija PEPPERDEM SERIES house as they had a party to shake down the house, with the way that most of the female housemates in the house were scantily dressed.

As expected there was a party last night. The first major party since the housemates, 21 of them in all were moved to the house in Ilupeju, Lagos and the contest started in earnest last Sunday. So last night was their 6th day entering the 7th, of all of them been locked up in the house. When you have just a small space to move about it, with plenty of well proportioned ladies and virile men in close proximity, with many of those ladies very gifted in areas on their body, then you should expect major competition for attention.

Big Brother must have done so much to bring the kind of people that are in the house currently for this 2019 #bbnaija edition together. Not a few of the ladies have structures to show off and they know they have it and can’t just stop putting them on display.

From Isilomo who is ‘chesterfully’ gifted, to sumptuous mom-Avala who has the same gifts at the front too, but is far more beautiful, to even the somewhat quiet Northern star Diane, to the irrepressible Virgin Mercy, who over compensated for not been too mammary inclined to having an over load somewhat in the behind section, that she is so obsessed with and want to show off at any given opportunity and to TACHA-the somewhat smart, attention loving stormy petrel, who has managed the combo (the ass and boobs) well. Tacha seem to have the backside and the frontside in equal proportion and she doesn’t mind showing to the world, nothing caring whose ox is gored.

So as they subconsciously competed against each other last night to see who can be more “scantily scandalous”, it was Tacha, who wore a bra top, or as some would mis-describe it, a barely there crop top, that was the cynosure of all eyes. It was obvious from what she wore that it was to make sure to be the main center of attraction and if care wasn’t taken, anything could happen. So something truly happened!!!!

In a place/space where music wss jamming and pulsating powerfully as provided by DJxclusive and then there was unlimited amount of booze (alcoholic and non alcoholic) to consume, in a confined space. What can we expect?

As they were all dancing provocatively using their best assets and displaying it to their advantage, voila Tacha’s rampant nipple on the left busted out of their confines, shouting eureka! Eureka!! I have found it! Ella who wore a type of a bandage dress, that showed her shape to high heavens, but who is not as mammary blessed as the likes of Avala, Isilomo, Diane nearly had the same nipple mishap too, but she was quick on the draw to prevent/avert the exposure.

We are anticipating some major exhaling in this house pretty soon. Seems like these ones have a wild streak and would soon explode as they explore or as the competition gets intense and hit home. There are some in the house who would do just about anything to stay and win. Thelma is one of such. Seyi Awolowo is quite intelligent. Omatsola is a clown, that’s very strategic. Tuoyo is gradually endearing himself to the ladies.

While the guys might love the antics of TACHA, the ladies might all just believe she’s a threat and want her out quickly!!!!

IS THERE TROUBLE IN OLAMIDE’S PARADISE? WITH MARIA OKANRENDE’S GROWING BUMP LOOKING FANTASTIC
WHY IS PASTOR PAUL SILENT????
Comment