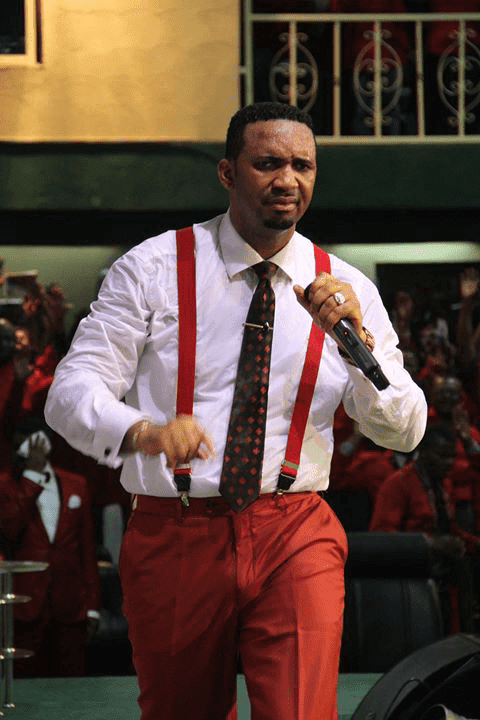 The very popular and light skinned prophet and leader of the “Mountain of Liberation and Miracle Ministry aka Liberation City” was enmeshed in what was believed to be a fake miracle storm a few days ago as he was seen in one of the several videos that had gained traction and gone viral which showed where a woman-Mrs Bose Ola (picture above) with a supposed stunted or deformed right arm had received a so called miracle to the very arm via Prophet, while in front of all that were present and to their utter astonishment, the arm had stretched out and returned back to normal.

In the video it was seen that while jumping up and down during his ministration as he was performing the so called miracle, the pastor had said that the woman’s problem was as a result of witches attack and that if they could do such a thing to the woman, his God can do far more for the woman then. And then he went on to demand from the so called witches the bone and consequently got it back from them and the woman’s arm was supposedly healed right in front of multitudes of witnesses. Which first drew so much praises at first and then negative attention afterwards.

It was soon discovered that the woman had been involved in the same miracle ‘act/scam’ with about 4 other pastors of different denominations and they also had performed the same exact miracle on her too getting the same result, without having the knowledge of others being engaged in the same act before.

It was the discovery of what became tagged a scam that had raised so much public odium against the pastors as fakes, that one of the major ones amongst the 5 being ‘Prophet Chris Okafor’, who in order to dissociate himself from the tag of being fake and performing fake/scam miracles that he has thought to respond.

In his response which he gave via his supposed publicist a “Sunday Adeyemi”, he had this to say – that the woman actually came to their church and was actually truly healed. He went further to say that, the woman could have come across the affliction again after she left, as such was the way with deliverance. Quoting the dude – The woman was in our church really. But you know in this issue of deliverance, some people could be delivered here and then go back to where they stayed before and the attack would return. That was what happened to the woman, he had said.

But the statement above to try to easily rationalize the whole thing/drama as simply as that is somewhat. How does one rationalize the fact that the prophet after having dealt with the so called witches (devil) that afflicted the woman, he didn’t fortify her against a return attack or advise her on the dangers of returned affliction. That’s because according to the scriptures, a returned affliction is far worse than the former.

Also he should have understood that a return affliction so quickly after a very public miracle if not guided, against could make him look fake/false before the public as it would be thought that everything was stage managed on the first place!

Prophet or pastor Chris Okafor is the 49 year old televangelist and faith healer behind the popular Mountain of Liberation and Miracle Ministry. He has been tagged as ‘the most accurate seer of the year’ before.

THE WOMAN IN THE SO CALLED SCAM MIRACLE VIDEO-MRS BOSE OLA RESPONDS. SAYS SHE WAS HEALED & THAT SHE DIDN’T COLLECT MONEY FROM ANYONE
6 PASTORS INVOLVED IN MIRACLE SCAM CONTROVERSY EXPOSED! !
Comment