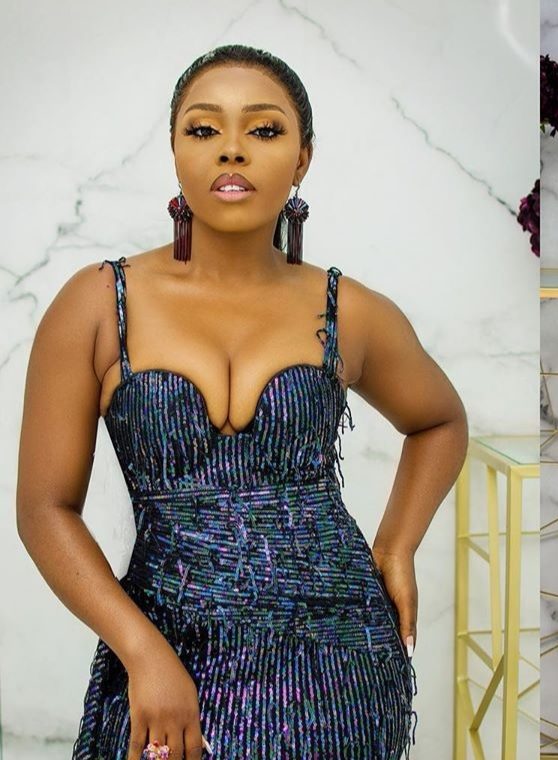 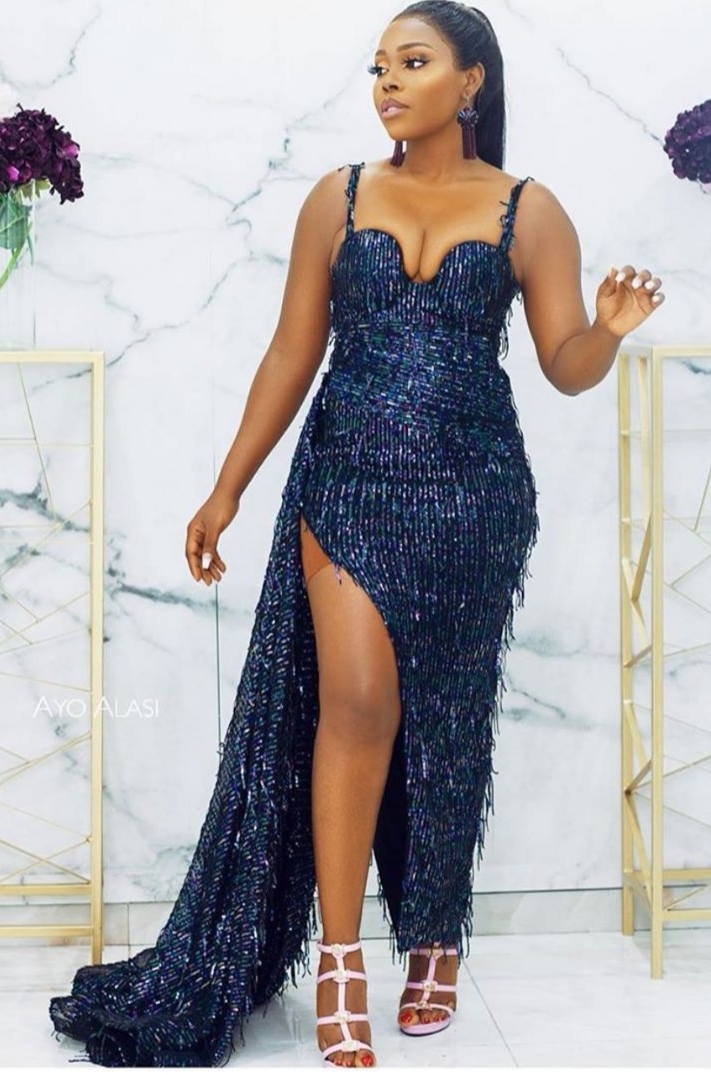 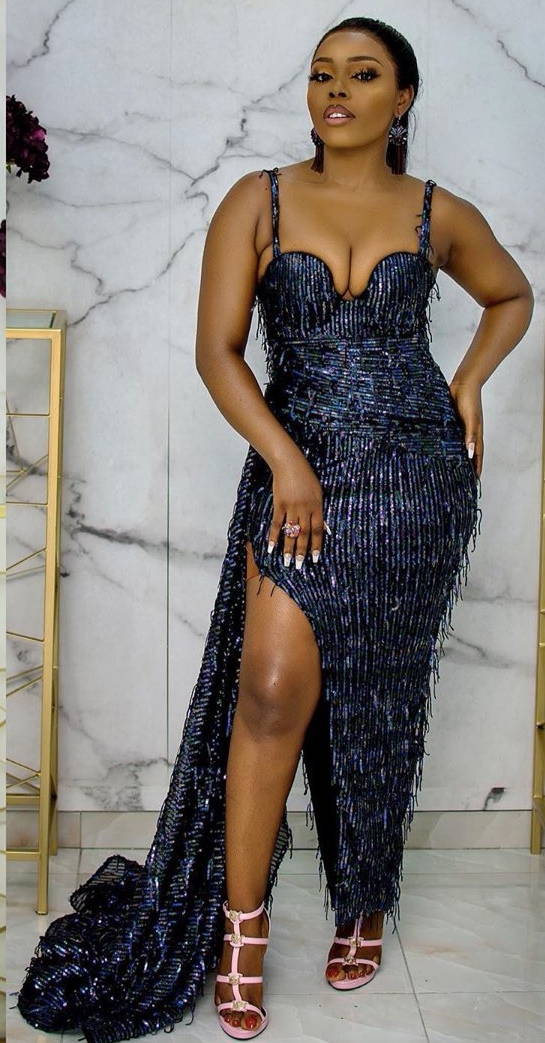 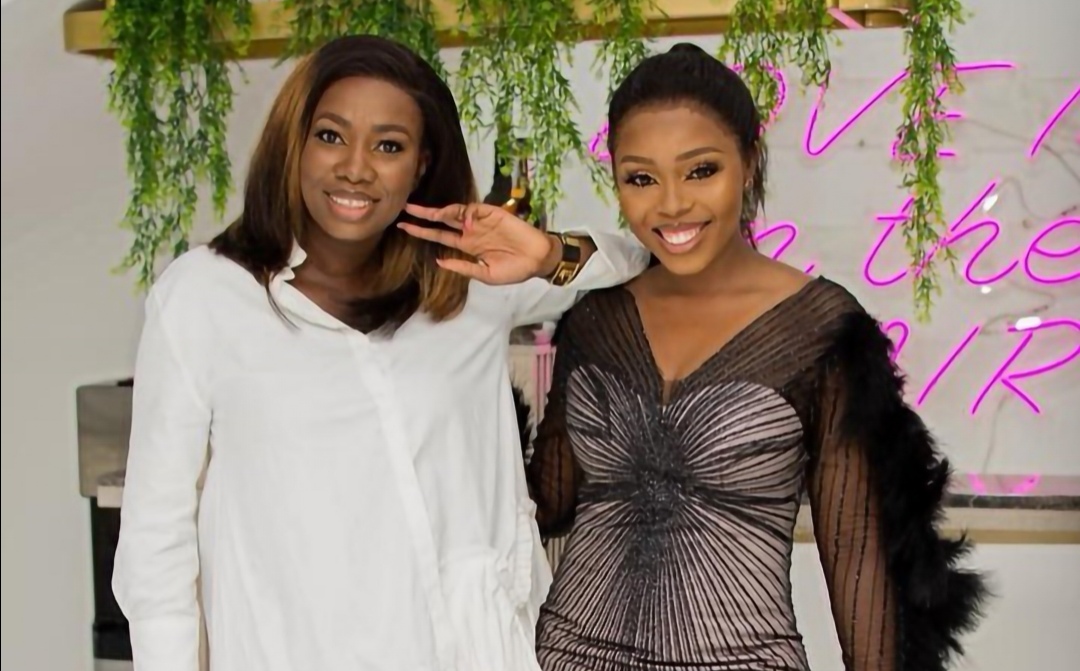 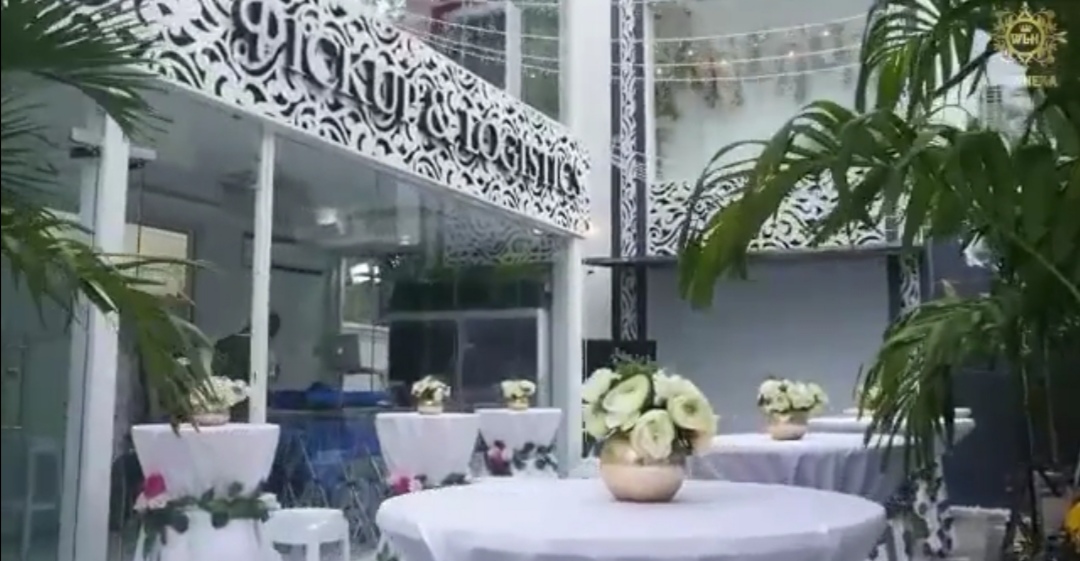 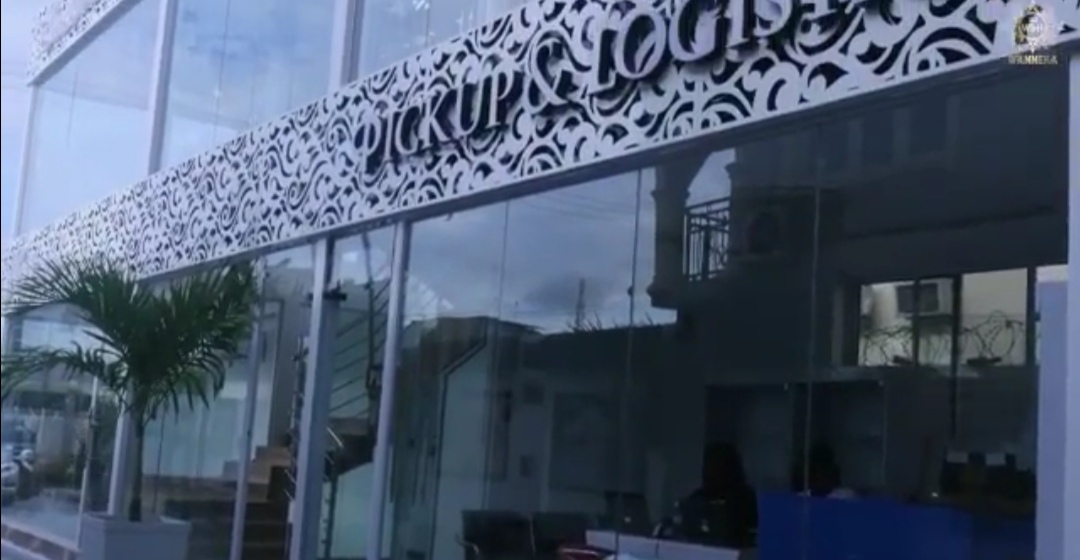 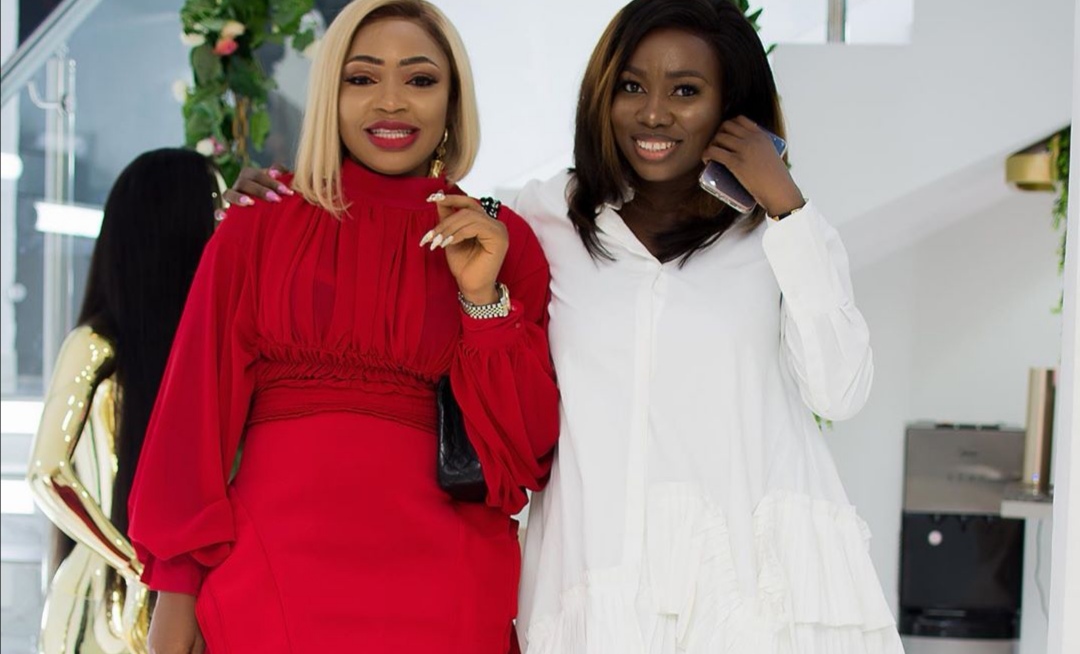 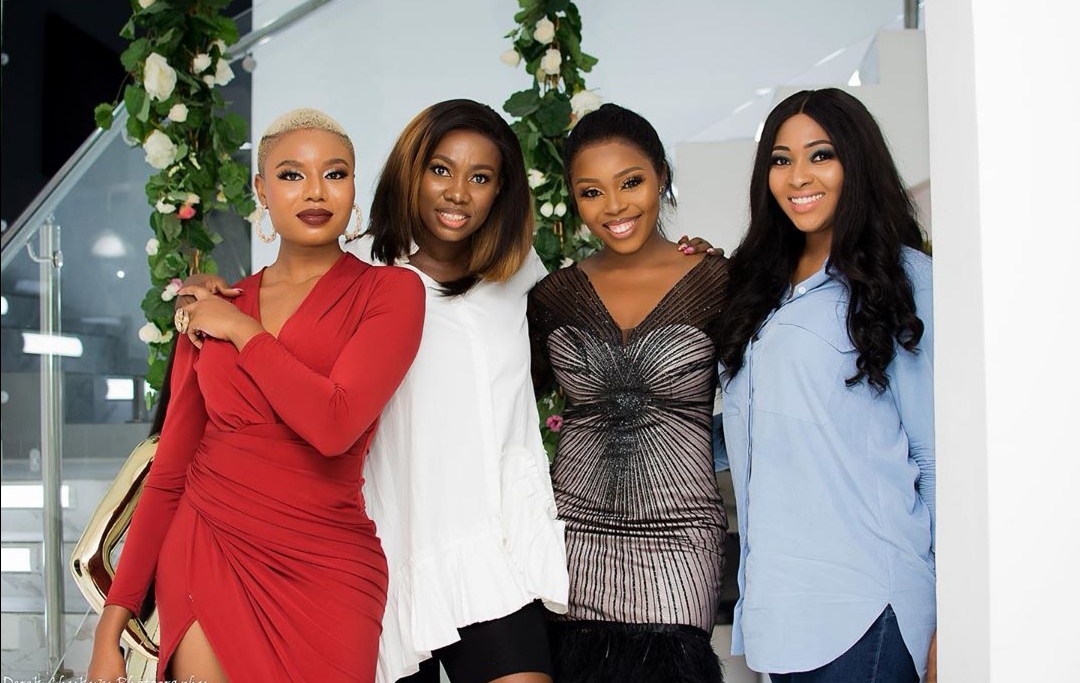 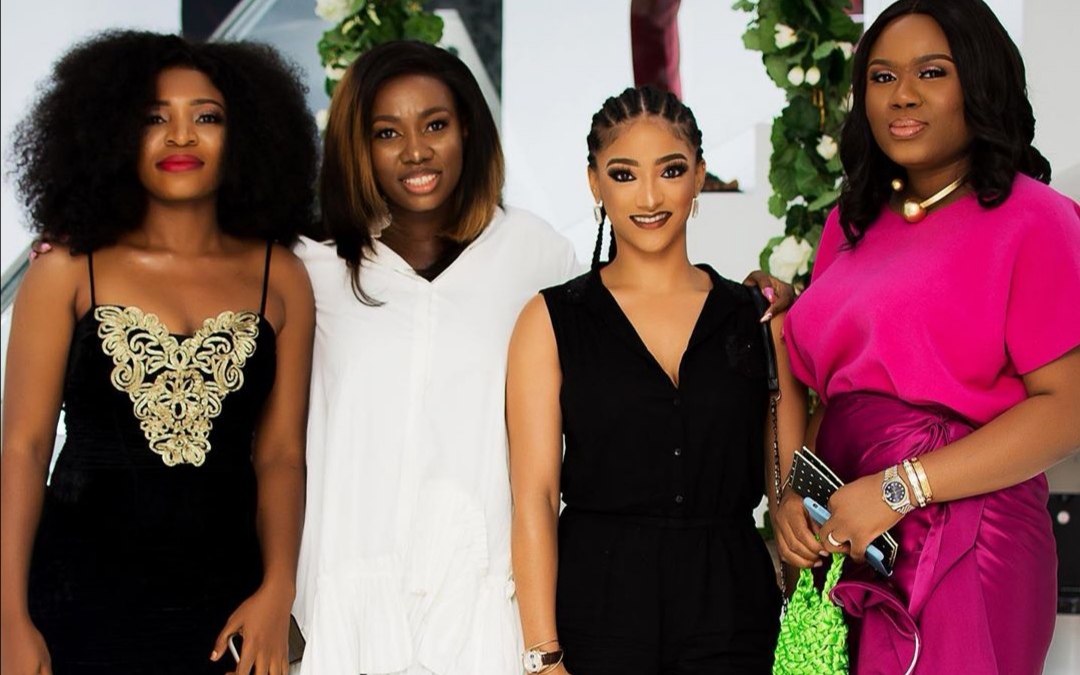 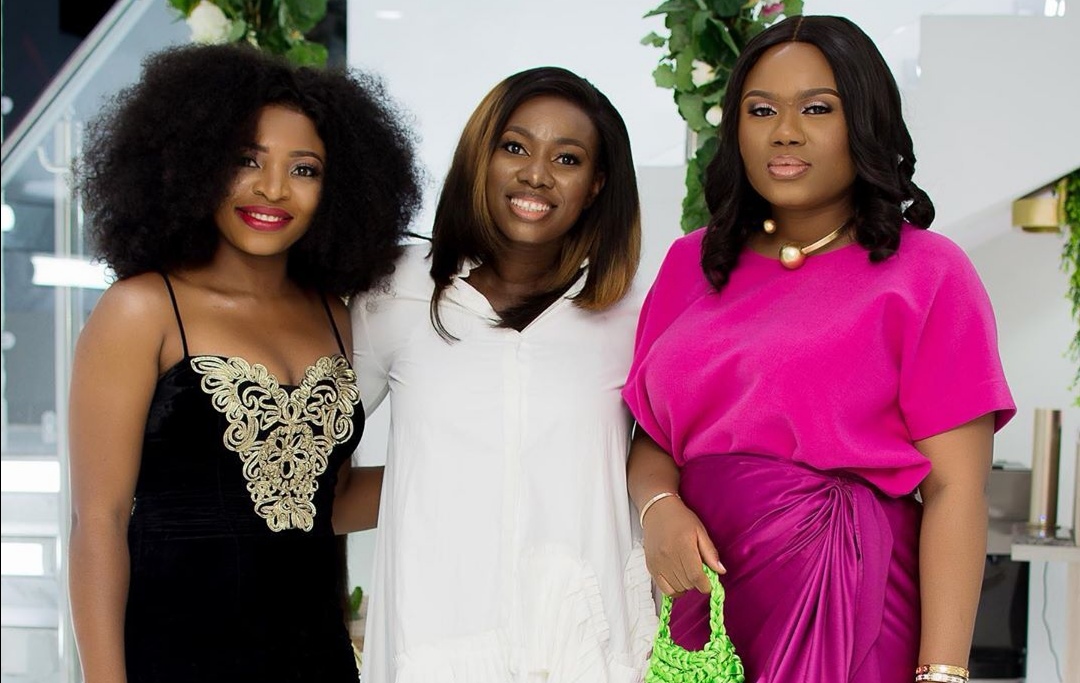 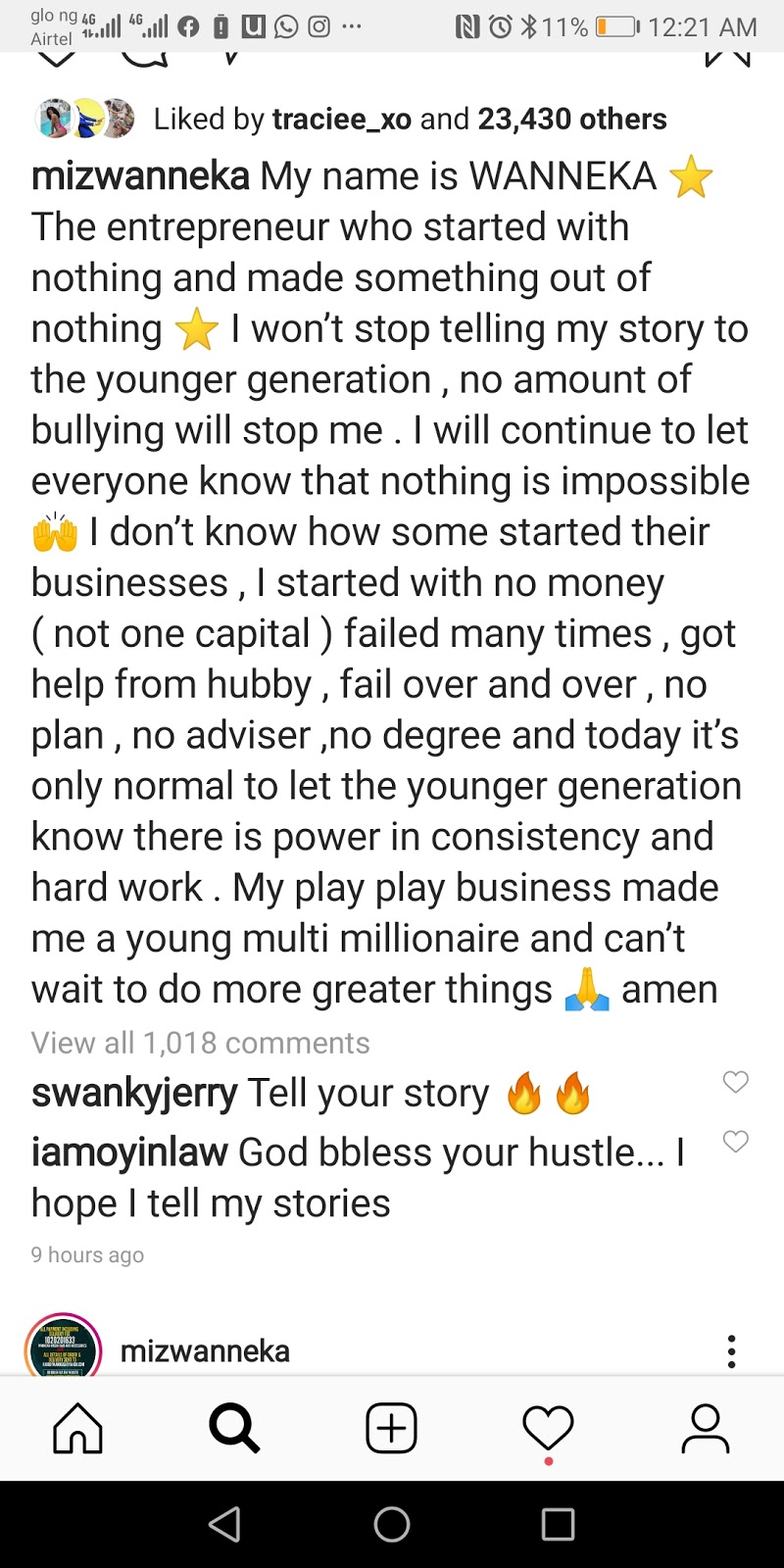 Hmmmmmmm. The young millionairess if ever there’s a word like that, has done it again. Apparently when she deliberately caused a bit of sustained panic with the arrival and unveiling of her N120m valued G-Swag, (that’s the 2020 Mercedes AMG G63 in matte black for you), she was yet to land fully and was still unfolding the goodies.

So now after only a few weeks since that car, sorry since that ‘senior executive utility vehicle’ SUV arrived, yesterday, that’s talking about Sunday, November 3, 2019 to be more precise, the young, married mother has gone a step further by declaring open her own, not rented. She in fact bought the place and rebuilt it to taste and specification, making it her own lifestyle headquarter.

And to help her declare the place open she had invited friends, family members and customers to share in her joy. And all of them gladly obliged her with their glamorous presence too. Gospel singer, Mercy Chinwo was even available to help lead thanksgiving songs in praise and worship to God. For all the blessings thus far.

Maybe she had or might not have heard the sniggering behind her back that her car had caused, with many asking about the possibility for one to have made up to N120m Naira to buy a car doing the hair business. With this new opening now, she has further confounded the wise again.

For those who might not know, maybe we should let them know certain things. The hair business all over the world is a massive and quite lucrative business. And those involved in it, are raking in the dough in millions upon millions from it. Those who were able to see into the future years back and got in early, have continued to gain from their foresight. It actually depends on the level you want to come in at, you just can just be a major success at it, if you can be disciplined, dedicated and hardworking.

However one wants to look at it, hair in wigs, weave-ons etc, doesn’t come cheap at all. You need at least 2 to 3 or more per head for a style. So just imagine if over the time, you have now built a massive clientele or followership that swears by you and trust your products implicitly. You are now not even just selling as a just a retailer, but you are also even a wholesaler, one that many others, who resells buys from. And the reason they come to you is because, you are known for sure quality and affordability. For about a N100,000 to N150,000, people would have a ball. And you could even still have cheaper or more luxurious and expensive ones. So you are in the mid-range, that’s what people have tagged affordable luxury. So like bees to honey or ants to honey, people troop in endlessly and you are raking in the dough left, right and center. Just literally smiling to the banks steadily on the daily.

The thing also is, compared to your cost and how much you are selling your products, you are literally making a kill, as per profit and then if you are disciplined, making sure you are not a spendthrift hmmmmmm. That’s how very possible one can afford the best without a whimper. Once in a while, if you have worked triple hard, you are allowed some excesses too once in a while. At least it’s your money and you cannot be an ‘aka gum for your own self nowwwww. So you can afford to indulge yourself too. The reason for making the money in the 1st place, is so as to have comfort.

People generally don’t understand or better still, don’t know that, we have quite the number in this clime to support any business to succeed, especially if it’s has to do with fashion, style or beauty. Just as long as we offer the products or services that the numbers actually needs or wants. In Nigeria, just like it obtains all over the world too, women would always want to out do each other on the style/fashion stake no matter what. So a young lady’s collection of hair could actually cost at any point in time be as much as a million NAIRA or more! 3 very good wigs could cost that much.

For those who might not know her, the now famous Nwanneka of #MizWanneka is a ’29 year old’ young lady by the name ‘Nwanneka Nkumah Doris’. And she’s the last child of 9 kids. She actually started her hair business journey in 2013, age 23 year old, meaning 6 years ago now, enough to learn the ropes and master it. She has failed twice in the business and gotten back up again much better. She has always combined her entrepreneurial drive with her education and has excelled in both. She graduated in 2017 & she has 3 kids-Emily, Sergei Nkumah & another.

In 2017, for the great & unflinching support her husband-William Nkumah has always given her all round, she bought him a ‘Range Rover Evoque’ as a valentine present and for her own birthday in that same year, she bought herself a badass Mercedes Benz saloon car. So her love for good machines on 4-wheels didn’t just start recently. So doing the G-Wagon is not a wonder to those who know her. She even bought a house in Lekki for her mom in 2018 from what we heard.

GTBANK FASHION WEEKEND 2019 BECKONS POWERFULLY. PROMISES TO BE THE BEST SO FAR IN THE SERIES
Everything you ever need to known about scarves
Comment