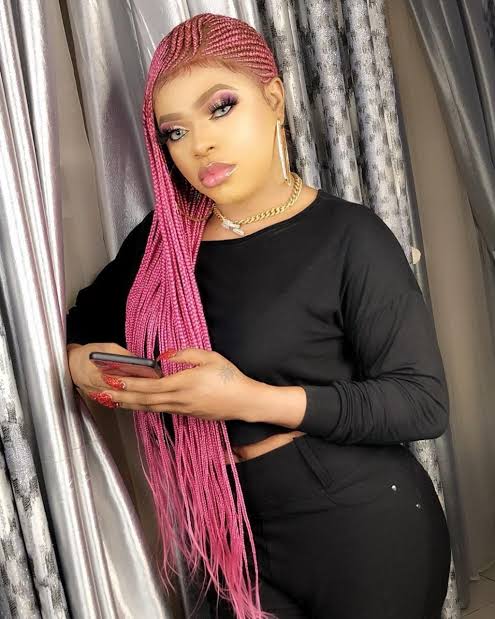 Bobrisky who is known for his epic cat fights and his undying loyalty to his Bff Tonto, has joined the fray powerfully as Tonto’s tag team member and he is already huffing and puffing, throwing jabs, combined with very dangerous left and right hooks, plus leg drops and all what have you. Bobrisky who is seemingly a mixed martial artist, is not doing his fight in any conventional way, but from the look of it, it’s like everything is a weapon with him. Hand, leg, mouth, fist etc.

After the pulverizing blows that Stella had delivered on Tonto, which must have dazed her temporarily, Bobrisky without waiting to tag Tonto officially, just ran into the arena of thr fight to rescue her friend and in doing so, delivered some mesmerizing blows of her own on Stella thus-

Madam Mary AMAKA someone just sent me your post where you said you won’t answer me 😂😂😂😂😂. There is absolutely nothing you wanna use to insult me because am way richer than your generation 😂😂😂😂”

“I’m shameless there is nothing you wanna say I haven’t heard 😂😂😂. I’m Bobrisky no one win my battle ! If you wanna come for my bestie @tontolet come with d real story not lies 😂😂😂😂😂😂😂. Yes I supported her because you mention my name. Old cargo go and take several seat.”

He then went further delivering this too, while shooting from the hip-

I’m a Peaceful soul, but don’t try shit with me or my friends. I have every right to STAND up for my bestie because she is my friend. D annoying part dat got me so pissed 😡. That old witch lied about tonto.”

Blog d right story not d wrong one biko 😂😂😂😂😂. Stella you might still change your mind to come for me. I’m here waiting…. I repeat no one win my BATTLE. Stupid old woman. They are calling you for village meeting Stella. Your age don pass ig 😂😂😂😂😂. Asaba ashewo 😂😂”

But Stella Dimoko-Korkus who is a prize fighter herself only responded to Bobrisky in a no holds barred way, hitting below the belt thus-

“As for Bobrisky calling me out on your behalf. How and why should I respond to a man who has cardiac arrest of the blokos now pretending to be a woman? I don’t know how to respond so I ll ignore you Bob who is rejected in the gay community for being dirty and stinky down there…..

Stella also delivered another mind numbing shade the way of Bobrisky, as part of a response to Tonto in another instance thus-

“I don’t need any confused gender paying my rent or shop for me in Dubai.

So who responds next? Or who would tag on the sides of the combatants next?