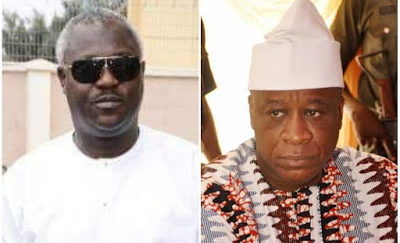 Battle of the Princes. Prince Ajasa vs. Aremo Oniru The state government had better make their announcement or the pronouncement of their choice on who to become the New Oniru of Iruland quickly, so as to avoid unnecessary speculations that would continue to fly about unrestrained, leading to intrigues that could lead to rancor, anarchy, strife and out right free for all in Iruland and environs as those contesting for the revered throne or stool of Iruland are said to be battle ready to take on one another any which that it’s possible. Both or better still all the sides are said to be battle ready for war, should it arise of dare to stick out its neck.

Today you will see where one side would lay outright claim to the crown like it belongs to only them, then tomorrow the other side too, would then debunk the other side’s claims and instead now, claim to be the one that’s the Oba elect instead of the others. The media battle to sway the minds of people one way or the other or to help give seeming advantage to one side or the other, has been intense and all the sides are doing their best to overwhelm each other, any which way they can including employing outright lies! And money is a major factor, being used to make things happen.

We heard that since the unfortunate demise of the last king, that’s talking about Oba Idowu Abiodun Oniru, who is the father of Aremo Adesegun Oniru, that the palace which normally should be opened to the 3 lawful ruling families has been under lock and key, by his own immediate family, who are from the Akiogun clan and none else has had and can have access to the Palace since.

Though the locking up of the palace was first accepted by all, so that  all that needed to be done, including the burial rites of the late head of the Idejo and last Oniru could be carried out without any issue and unnecessary stress, but that acceptance has since changed, as the other ruling houses are of the opinion, that the Akiogun ruling family or clan, out of the 3 ruling houses are already somewhat unilaterally acting like everything about the royal stool of the Onitu, the crown and kingdom belongs to only them alone and not for all the 3 families that can aspire to the throne.

While Aremo Adesegun Oniru from the Akiogun clan is been claimed by some to be the most eligible person to become the next Oniruof Iruland  to continue the legacy of his own father, who only just passed on in September of 2019, after ruling on the throne for 25 years. The other side are of the claim that Aremo cannot ever have an immediate claim to the same stool that his father just relinquished by death. As it is not a father to son succession, but rather a family to family rotation thing. This their valid assertion is according to the September 14, 1993 gazette signed by the then Governor of Lagos State as regarding the Oniru stool, which says that 3 families would aspire to the throne by rotation. That rotation is between the Akiogun, Ogunyemi & Abisogun Ruling Houses. And so since the late Oba Idowu Abiodun Oniru was from the Akiogun ruling house and has just left the throne, would it then be fair to all  concerned and would it speak justice also, for his immediate son to take over from him soon after his demise? This is the argument of the other side.

From our findings, it might actually not be wise for Aremo to soft pedal or even back pedal on his ambition to sit on the throne of his forebears. Reasons are that he seems to have too much of valuable investments in Iruland, which could be jeopardized, should another not directly from his clan come on board as the next king. According to those in the know, and stating the fact as it should be, there are no more lands to sell in Oniru. All that’s of any value have either been sold or are owned by the Abiodun Onirus already. So for a new Oba from another clan to come on board could spell disaster!

For the other clans. One of the very reasons they want to claim what they believe rightfully belongs to them too, is because of the so called injustice they believe they have had to face all of this many years. To them not only was the throne and crown kept away from them for longer than necessary, but also all of the things that they should have gained from being a part of the royal or chieftaincy family never ever came to them. but just to a a few. So to them this is the only time they feel they can fight and win this battle for some kind of liberation. But from all that’s on the ground, they are not going to get what they are expecting on a platter of gold at all. It shall most likely be a battle to the finish line.

And so from the little snippets that we have gotten, some might be hell bent on asserting their own rights too to the stool/throne/crown as they might be willing to storm the locked up palace today (yesterday) or this week. There’s some sort of  apprehension in the air, as some feel that something could happen at just anytime, with the slightest provocation. So there’s the unconfirmed warning, that those in the area where the palace is located should tread with caution. According to the unconfirmed gist which goes thus….

The Oniru Palace Will be Locked Down Today with tons of armoured vehicles and as the family of the late Oniru are refusing to vacate the palace for the incoming one, so an Oba has ordered for the lockdown.

There is therefore the need to be cautious around Oniru in the next few days.

Avoid the area if you don’t have anything important to do around there.

COULD LOVE HAVE TURNED SO TERRIBLY SOUR SO SOON? AS OLUWO OF IWO TOTALLY ABANDONS EX-WIFE & DAUGHTER!
IS SHE THE LOVELIEST, THE FAIREST OF THEM ALL?
Comment