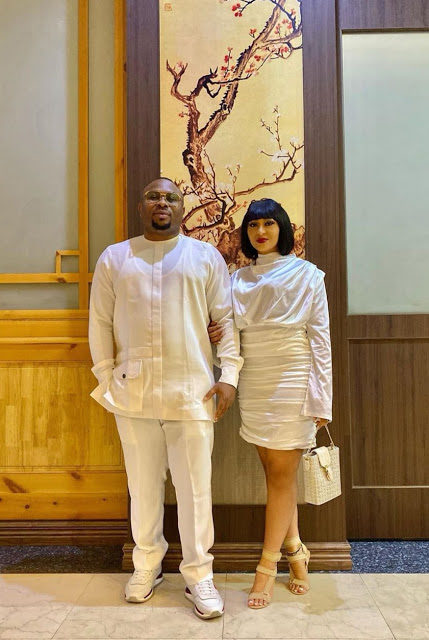 Churchill Adekunle & Rosy Meurer  We believe this couple or this 2, do not need any sort of introduction whatsoever. But just for the sake of it, we would actually do the needful.

Churchill Olakunle is the ex-husband of controversial actress and celebrity, Tonto Dikeh, who many speculate is still currently held up in Dubai over an issue of many weeks back. They are the parents of an adorable boy called King.

The standout and quite beautiful and in your face Rosy Meurer on the other side, is the beautiful but equally controversial actress and self proclaimed goodwill ambassador and model.

It was then alleged by Tonto during the epic fight that ensued between husband and wife and had the social media as the arena of choice and that lasted for several weeks and that went viral and left many mouth agape for a long time that, Rosy was one of the reasons for the demise of her marriage to her ex-husband. From the way the thing was painted then, it was like Rosy was the side chic from Mars or Pluto who totally took the soul and heart of Churchill away and never released it ever again.

While there were several denials from Churchill and maybe also Rosy herself then, many somewhat believed something must have transpired between the duo. Seems like that with the passage of time, both might become far more comfortable about showing off their friendship more openly now, as we have seen them in close proximity at several events and occasions. And it’s now like no matter how people define the friendship to be, be it that they are lovers or mere super good friends.

One thing you cannot deny the duo though is that, they are always there for each other no matter what, not minding whose ox is gored.

Here in the picture above, the duo are in beautiful matching white outfits at the Chai Tang Restaurant, Twin Waters at the birthday dinner celebrating Churchill Adekunle.

Are they the ‘official newest couple’ in town? See the body language and vibe both are throwing off.