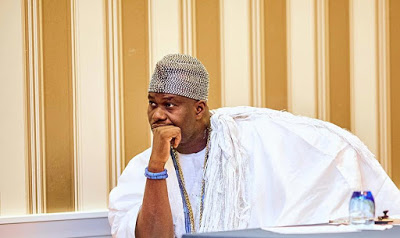 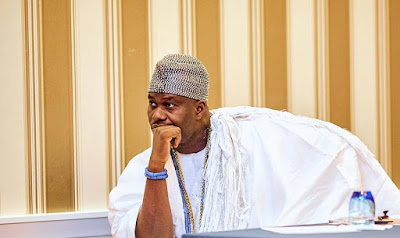 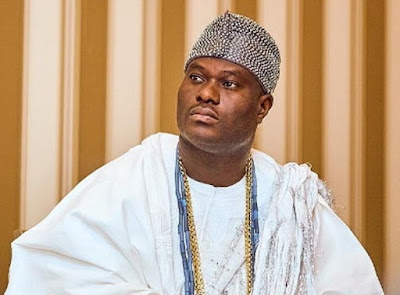 In what was like a bad joke that played out for several minutes and caused some major panic, the Ooni of Ife, his imperial majesty, Oba Enitan Babatunde Ogunwusi Ojaja II, who is South West Nigeria’s most respected king and in fact one of the most valued African king in the whole universe, who is also a spiritual father of the entire Yoruba race across the world was temporarily embarrassed by the malfunctioning of technology, a lift (escalator) at the Continental Hotel earlier today, where he was lodged.

The freak show or shame has been a problem at the supposed 2 or 3 star hotel waiting to happen for a bit now and when it finally trapped a supposed ‘demigod’, a highly valued man (personality) at that, reputed to command or have at his command and authority, not less than 201 out of the 400 plus deities that abounds, then it is a problem that would after all find a permanent solution after wards.

The management of the hotel located on the Island, at Kofo Abayomi, in Victoria Island to be more precise, we believe would henceforth do all that’s in their power and in their own interest to make sure such an unbeffiting, unpalatable and embarrassing occurrence would never happen again, especially to the man who is the focal point (like the highest ever ranked prophets of other religions) of traditional religious worship in Yoruba mythology. The Ooni is reputed to be a direct descendant and representative of Oduduwa, who is reputed to be the founding father of the Yoruba race. So he is the mouthpiece of traditional Yoruba religion in the whole world. Such is the immensity or ‘immenseness’ of his position and powers, if ever there is a word like immenseness.

When the unfortunate and ill timed incidence occurred, all the multitudes of the King’s hangers on or troops went into an absolutely stupefying and incredulous panic mode. It was a shock 🤯 to them, likened to a spirit, being trapped in a box. Until the lift began to work again and the revered monarch came out unscathed before relief gladdened the hearts of all that were in the vicinity. And in a most calm manner, Kabiyesi stepped out of the faulty contraption and still waved to his admirers in his very regal manner to show that all was well and that he wasn’t in any way fazed by the temporary incidence, like it was just one of those things that ‘mere mortals’ normally encounter every other time.

The Continental Hotel Lagos has been a shadow of itself since the Incontinental brand withdrew from managing it. Unlike how things used to be prim and proper and functioning well then, things have been a bit funny for a bit now from what we hear. We can recall we were at one of the suites sometime back 2 years ago at a birthday party and was astounded that the ceiling was leaking and a bucket had to be placed at the spot to gather the water dripping down. So the lift malfunctioning and trapping the king at such an hotel was just one of those things (problems) waiting to happen.

CRYSTAL BALL EXPECTATIONS FOR 2020 FROM MAESTRO’S MEDIA
2019 ARE THIS THE OFFICIAL NEWEST COUPLE IN TOWN?
Comment