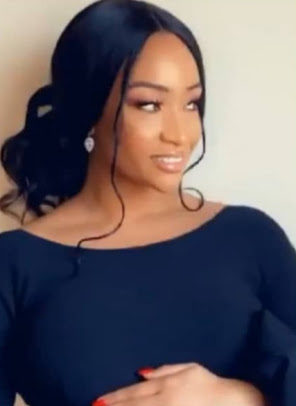 The beautiful countdown has already begun and 2020 is going to be a good and big year in the household of the Tinubus. And we are talking about in Seyi and Layal Tinubu’s household and by extension that of Seyi’s dad, in the person of the great Asiwaju himself, the Jagaban Borgu, Asiwaju Bola Ahmed Tinubu, who is the national leader of the ruling party, the APC. Seyi’s gorgeous mom Mrs. Olubunmi Sola Oshonaike had a fantastic 60th birthday celebration late last year that was a talk of the town event.

The unlimited joy would also be extending to the household of Layal’s parent too, that’s talking about Mrs. Nkechi Holm and her handsome husband, as their beautiful daughter Layal, who looks like her gorgeous mom’s younger sister, is presently on the 9 months course, meaning she’s heavily pregnant. And all things being equal, she should drop her bambino, her 2nd one for that matter, long before the middle of this year-2020.

Between the couple, they already have an adorable daughter they fondly call Noella, who the whole extended family dotes on so adoringly. ‘Amira Titilayo Noella Rose Simisola Ashabi Tinubu’, that’s her full name, would be 3 this year by June 2nd, to be more precise, as she was born on June 2, 2017 in London. Her more favorite name Noella is actually derived from Noel which means Christmas and is therefore actually given to those born around the Christmas season, but her parents might have just fallen so in love with the name and decided to give her that, even as she’s a June born and therefore born under the Zodiac sigh Gemini, represented by the twin.

Seyi who is presently the CEO & President of Loatsad Promomedia and the founder of Noella Foundation, named after his daughter got married to his supremely beautiful wife, the then Layal J. Holm who now owns Tots Toys, in Lagos at the Oba of Lagos palace at a court wedding on August 8, 2015 meaning he and his wife would be celebrating their 5th (half a decade) wedding anniversary in August of 2020. He and the wife with loads of friends and family members later had the beautiful white wedding at picturesque Villa Erba, Lake Como, Italy on August 10, 2016.