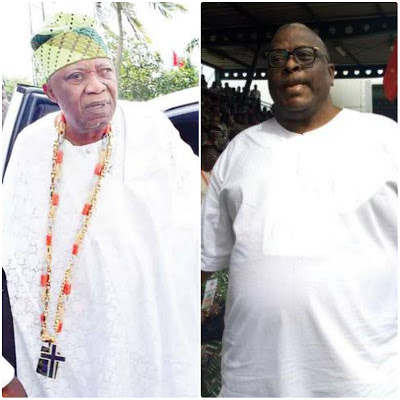 We all know this 2 men. Chief Kessington Adebutu needs no introduction whatsoever. But just for the sake of it let’s do something like a little intro. He is the man referred to as the “Nigerian undisputed king of lotto” and a super great and highly celebrated philanthropist. Everything that has to do with lottery/betting revolves around him. His name is in fact synonymous with it, in a way he made it popular and showed to Nigerians one could be a billionaire from it. He and his late friend, Chief Solomon “gbengbeleku” Ayoku were the colossus of betting and all. And Baba Ijebu as he is fondly known, a name also synonymous with his brand, has kept the flag flying, even after the demise of his friend who was a colossus in Casino business. He owns Premier Lottery, which has been in business for so long. The Odole of Ife, is the father of Honorable Ladi Adebutu, who is a politician and the other Governorship aspirant of the PDP in their ill fated desire to wrest power from the ruling APC recently. While his son Ladi is a politician and used to be an Honorable member of the Federal House of Representatives, his dad who is in his 80s, has never being a politician.

Chief Buruji Kashamu on the other hand a well known politician and a leader of the PDP in Ogun State. He is in fact the controversial high spending moneybag businessman and politician from Ogun State. He is the owner of the Best Western Hotel opposite the Bar Beach, Victoria Island, which is just one of the businesses he is known for. He had a long running court case at a point, when the US Government wanted to extradite him to face allegations of drug running in America, an allegation he has denied and continues to deny fervently and with vigor. He was a distinguished Senator of  the Federal Republic at a point. He fought his own party to a standstill to be the PDP Gubernatorial candidate of his party at the last election, his unrelenting rival was none other than Hon. Ladi Adebutu, who had emerged as . Both see each other as straightforward, uncompromising bitter enemies, who would go to any length to do away with each other. Chief Buruji Kashamu is the owner and promoter of Western Lotto.

Ladi like we have already said above, is an unflinching and bitter rival and enemy of Buruji. And Ladi is the 1st son & eldest child of the owner of Premier Lotto, Chief Kessington Adebutu. Premier Lotto and Western Lotto are competitors, in fact major rivals. Premier Lotto controls the turf, at least a large percentage of it, because of maybe length of time in existence. Western Lotto being a rival and competitor would love to have one over an enemy. So like they say, all is fair in war.

Since the owners of the brands are bitter rivals somewhat, then their companies or brands doing the same business are also likely hit heads also0 be bitter rivals and enemies too and that has been seen to be the case now, with what is presently unfolding into a war of damn all consequences and bring your rival down at all cost by Western Lotto against Premier Lotto. Maybe to get to Ladi, Buruji is willing to take down the business that brings in the milk that feeds the family in the most legal war possible, most especially if there’s a chink to exploit.

Hence, Senator Buruji Kashamu justifiably through his Western Lotto brand, became a whistle blower to the Nigerian anti graft body the EFCC, in a strongly worded petition alleging ‘economic sabotage and multi-billion Naira tax fraud’ to the tune of as much as N5billion. And hence the investigation began and even gentleman Segun Adebutu, one of the sons of the Great man, has been invited for questioning.

So last year December of 2019, Justice Chukwujekwu Aneke of the Federal High Court in Lagos had granted Western Lotto Ltd an Anton Piller order (a court order which requires the defendant in proceedings to permit the plaintiff or his or her legal representatives to enter the defendant’s premises in order to obtain evidence essential to the plaintiff’s case) authorizing it to search 23 firms involved in the Lotto business, for evidence of violation of its Ghana Games patents infringement, which they Western Lotto had exclusive rights to.

The Ghana Games are alleged to be responsible for about 60/70 percent of the revenue generated from lottery games in Nigeria.

The reports had said that the Ghana National Lottery Authority (NLA) had granted Western Lotto Nigeria Limited the “exclusive rights” in an agreement recently executed by both parties.

Western Lotto’s right also include “the exclusive right to use the draw numbers of the Ghana National Lottery Authority (NLA) to sell and distribute lotto products and games to customers located in the Federal Republic of Nigeria”.

The first and second defendants in the suit, marked FHC/L/CS/2321/19, are the National Lottery Regulatory Commission and Registrar of Trademarks.

And then there 23 others which includes Premier Lotto Ltd and even K.C Gaming Networks Ltd who are the parent company of Bet9ja, so in actual fact, Western Lotto is actual fighting the biggest names in the business, in fact a consortium if one can put it like that.

The given court order also affects “each and every point of sale stations and agency operated by all the brands offering lottery products.”

Justice Aneke also went further to  appoint the third to 25th defendants to represent “the class of persons passing off their lotto products by using trade names and trade marks that are associated with the ‘Ghana Games’…and or who illegally sell ‘Ghana Games’ lotto products in Nigeria by using the draw of the numbers of the Ghana NLA to sell and distribute lotto games to customers in Nigeria.”

So it’s a long drawn battle ahead and big money, in fact very big money would most definitely exchange hands.