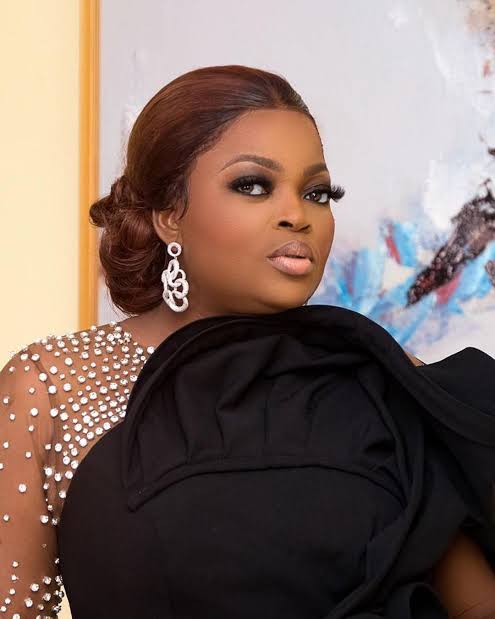 The last has not been heard on the COVID-19 gathering violation by ace actress Funke Akindele-Bello aka JENIFA and her crew, as it has been reported that she has been arrested by the Police authorities and has been taken to the SCID, Panti, Yaba, Lagos. Where she is expected to tell the authorities why she and her people decided to flout the stay-at-home rules.

The arrest of the ace comic has been confirmed by the Lagos State Police Command, Public Relations Officer, He said, “Yes, we have (arrested) Funke Akindele and we are looking for the others. She has been taken to SCID.”

It was learnt that policemen arrived at Amen Estate abode of Funke, off Lekki-Epe Expressway location in about three patrol vehicles.

Funke Akindele-Bello, popularly known as Jenifa, who is married to singer, Abdulrasheed Bello aka JJC Skillz, had held a party in his honour on Saturday, April 4, 2020.

Singer, Azeez Fashola aka Naira Marley, also graced the party, which had over 20 others in attendance. Now all of them have been invited to report to the Police Command, by Monday, April 6, 2020 or they risk been declared wanted!

The Lagos Infection Diseases Regulations 2020 prescribes a jail term of one month or N100,000 fine or both for persons found guilty of hosting gatherings or flouting the lockdown order.

“Where the arrested person is found guilty, the person is liable to a fine of one Hundred Thousand Nara fine (N100,000.00) or one (1) month imprisonment or three (3) months Community service.”

We know for a fact that Funke Akindele-Bello, her husband and others would not be jailed, but they might made to pay the fine so as to act as a deterrent for others.

FORMER QUEEN OF IFE ZAYNAB OTITI OBANOR AS AN ANGEL OF MERCY. Earmarks N100M for distribution at N10000 each to 10000 people.
FUNKE AKINDELE & HUSBAND DRAWS THE IRE/ANGER OF NIGERIANS, OVER A ‘SENSELESS’ BIRTHDAY PARTY THEY HOSTED DURING LOCKDOWN.
Comment