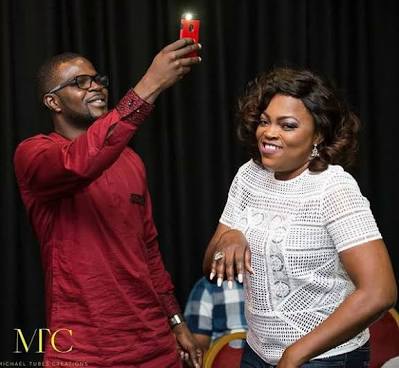 …14 days community service, fines each N100,000. Naira Marley already in custody too, most likely to face same. Manhunt now launched for the other guests who haven’t reported themselves.

The Lagos State Government via the police authorities in Lagos, have successfully prosecuted actress and comic Funke Akindele-Bello popularly known as Jenifa and her husband AbdulRasheed Bello aka JJC SKILLZ. Both were taken to the magistrate court today, this morning to face allegations of violating the state regulations guiding against unnecessary assemblage during this COVID-19 Coronavirus pandemic. The couple had hosted a birthday party for Funke’s husband and the said party was wrongly posted on the social media, which caused a lot of uproar. Funke was later arrested and her husband too and the court this afternoon gave her judgement & punishment, as related in the press release below signed by the Police spokesperson, DSP Bala Elkana.

6th April, 2020
Press Release
Funke Akindele and her husband were charged to Court for violating restriction orders in Lagos
On 6th April, 2020 at about 1100hours, Funke Akindele Bello and her husband Abdul Rasheed Bello were arraigned in Chief Magistrate Court 1 Ogba on one count charge. They were brought to Court by detectives from the State Criminal Investigation Department Yaba led by the Deputy Commissioner of Police in charge of investigation, DCP Yetunde Longe. The prosecuting team was lead by the Hon Attorney General of Lagos State, Moyosore Onigbanjo, SAN. The charge was read to the accused persons by the Court and they pleaded guilty. The Court found them guilty as charged and sentenced as follows: The defendants are to pay a fine of 100,000 each, sentenced to 14 days community service, three hours per day, excluding Saturday and Sunday; each Defender shall visit 10 important public places within Lagos State to educate the public on the consequences of non compliance with the restriction order; and they must submit the names and phone numbers of every person who attended the party. They shall be placed on isolation by the State Government to determine their COVID-19 status. Failure to abide by the above directives shall attract more severe punishments.

2. The brief facts of the case as contained in the charge are: On 04/04/2020, the two accused persons held a party at their residents with over twenty persons in attendance contrary to the social distancing directives made in pursuant to Regulation 8(1)(a) and (b) & 17(1)(i) of the Lagos State Infectious Disease (Emergency Prevention) Regulations 2020 and therefore committed an offence under Section 58 of the Public Health Law Cap P16 Vol. 9, Laws of Lagos State 2015.

3. The suspects were arrested by operatives of Lagos State Police Command following a viral video showing a large number of persons mainly in the entertainment industry in an Estate, along Ajah, Ibeju-Lekki axis, Lagos celebrating a birthday party organised by Funke Akindele Bello and her husband Abdul Rasheed Bello.

*2. Azeez Fashola a.k.a Naira Marley is now in Police custody. He will also be charged to Court for violating the restriction orders.* The Command has launched a manhunt for the remaining persons who attended the party. The Commissioner of Police Lagos State Command, CP Hakeem Odumosu psc expressed his profound gratitude to Lagosians and other well meaning Nigerians that speak up against the violations. Together we can stop the spread of COVID-19.
DSP Bala Elkana
Police Public Relations Officer,
Lagos State Command.