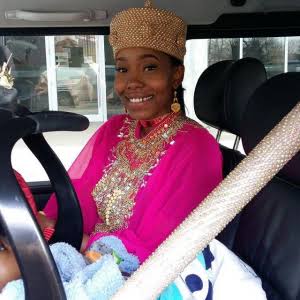 ….I had too much to drink and went to one of the rooms to lay down, only to wake up and find Oluwo on top of me, all my clothes were removed… so said Ms. Chin.

Until maybe the elders and their mutual friends and more get into this matter and make sure that both combatants would sheath their swords, these 2 would continue to unleash ballistic missiles against themselves that would continue to shock the world. A world that would gladly sit with bags of popcorn and maybe ice-cold drinks, to watch gleefully as I he unpalatable drama would continue to unfold. Both sides from how this is going are willing and ready to unleash mayhem on each other.

So late last year, we woke up to the news that the extremely flamboyant and self-styled Emperor of Greater Iwo, Oba AbdulRosheed Akanji, Telu 1, had sent his wife and mother of his child, the gorgeous Chanel Chin packing.

It wasn’t just that she was sent packing alone, the way and manner it was done, was quite unroyally. The embarrassment was at the peak!

With her tail between her legs & with nothing to boast of, she was sent packing. It took the effort of a few good people to help cover her shame. The palace had sent a scathing press release out then, that any who had any dealings with the now former Queen, does so at their own peril.

The Oluwo himself instead of maintaining a dignified silence about the whole matter, even went on to insinuate that his former wife, may have conspired with his enemies to poison him, so as to eliminate him. Other unpalatable insinuations were also made too.

After many months now, it seems that Chanel Chin, the former Queen has decided to clear her name of much of the insinuations and from the looks of it, she doesn’t mind to go down into the pits to unveil her side of the story too. Since the palace had done their best to shame and embarrass her, she too must have decided to use their same tool against them.

Hear her in this interview-

We have also thought to transcribe the video conversation here too. See below.

“It was my 1st time coming to Africa. I didn’t just want to stay in Lagos, in Lekki. I wanted to see everything. So we now went to Osun State for the coronation.

It was a day before the coronation. Coronation weekend. We went. We met Oluwo, 2 days before his coronation. I introduced myself to him. He is from Toronto, I am from Toronto. Boom!!!!

We met him 2 days before his coronation and then I went to his coronation. Just as a tourist. And then I met him at the burial party of one Lagos monarch’s wife. I believed the father passed on. And I was at that burial party, where I met him again. And then they had another party for him in Ikeja, that I was invited to by one Alhaji. Alhaji is also from Iwo. And this Alhaji was dating my friend at the time. So my friend is also Jamaican. So he invited us for this party.

When I arrived at this party, it was a popular Lagos monarch that actually introduced me again to Oluwo again. This was gonna be our 4th time of meeting now you know. This monarch was like, he is a king. He is from Toronto, he doesn’t have a wife. It’s a big glory to be Olori. We would be beside you.

And you know it was a party. We were all drinking, having fun and I had a little too much to drink. So I went upstairs to one of the rooms and I laid down and I fell asleep and like 3’o Clock in the morning, I woke up to find Oluwo on top of me! With my clothes….my clothes were removed.

I didn’t have any clothes on my body and Oluwo was in top of me. And I started going crazy! I am just a foreigner, I didn’t know what was going on! And I said excuse me….No no no……And he said, I am a king and in our culture you don’t say No to a king. And when a king extend leg to you, you must agree and you are going to be my wife. I am going to marry you and don’t worry you are going to have a good life.

And you know, it’s very embarrassing. And you know the reason why I am saying this is because, the Oluwo has gone all around, North, South, East and West. He’s telling people I was a prostitute from Toronto! That he didn’t know me. That he slept with me on the 1st night.

I had too much to drink and I laid down in one of the rooms in the house. I woke up 3’o Clock in the morning, my clothes was removed and Oluwo was on top of me! That is what happened. And one month later, this was February 2, 2016.

I would never forget this day because, this is the day that my life changed drastically, the day I met Oluwo. February 2nd 2016. One month later, I missed my menses and I was pregnant.

So one month after I met Oluwo, I was pregnant! If you people do the maths. His coronation was January 16th. I met him February 2nd, my baby is born November 16, 2016. November from February is 9 months. That’s when I met Oluwo.

He raped me! The next day, because he already slept with me.

Listen to me Maureen, am not gonna say I was a virgin. I was not a virgin. But he slept with me the 1st night, he raped me. Next day, he said to me, we are going to Iwo. We are going to the palace and I will make you queen. So I went with him. He told me, I should pack all my load and he is bringing me to Iwo and he would do marriage”.

And above is the transcription of the same video chat above.

Knowing the King to be one who doesn’t suffer fools gladly, we are expecting a very robust response from him, which most likely would be the further opening of more putrid mess. And in that kind of scenario we should expect more bombs to be thrown to and fro.

A big shame though.